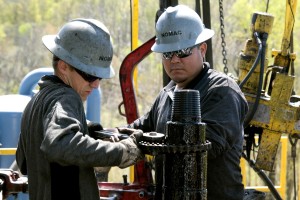 State environmental regulators say three natural gas drillers contaminated 17 separate drinking water wells in north central Pennsylvania and together the companies have paid close to $375,000 in fines. The Department of Environmental Protection blamed well construction for methane migrating into drinking water supplies. If methane builds up in an enclosed space like a house, the colorless, odorless gas can cause an explosion. The pollution incidents in Bradford, Lycoming and Tioga counties date back to 2011 and 2012.

“These were complex and lengthy investigations that took a considerable amount of time to resolve,” said DEP Director of District Oil and Gas Operations John Ryder in a release. “But the department was able to conclusively determine that methane gas from natural gas wells had migrated off-site and impacted private wells serving homes and hunting clubs.”

Ryder was not available to explain why the investigations took three to four years to complete.

On May 17, 2011 a citizen complaint led to an investigation of XTO Energy operations in Lycoming County. DEP says “casing and cement issues” led to methane contamination in seven private water wells, as well as leaks in Little Muncy Creek and German Run. XTO paid a $95,753 fine.

A year later, on May 19, 2012, Chesapeake Appalachia reported to DEP that methane migrated from a well in Leroy Township, Bradford County. At the time, nearby resident Michael Leighton told StateImpact that the water in his well was “bubbling up.”

DEP says four private water wells were contaminated due to poor well casing at the Chesapeake well and methane was found leaking from 14 locations within the Towanda Creek watershed. DEP had sited that same well for “improper well casing” two years earlier, in August 2010. The company is the top violator among Marcellus gas drillers in the state, and has paid more than $1.5 million in fines. For this incident, DEP fined Chesapeake $193,135.

The third incident involved an abandoned gas well. SWEPI LP notified DEP in June 2012 that one of their wells was having problems. A water well located inside the nearby Ralston Hunting Club’s cabin was flooding the building. Soon, someone discovered a bigger problem: a geyser shooting methane-infused water more than 40 feet in the air. “That’s when all hell broke lose,” a neighboring landowner told StateImpact.

One of SWEPI’s wells made contact with an old well dug in the 1930’s, which led to contamination of drinking water supplies at two hunting clubs. Methane was found seeping from French Lick Run. The company paid $84,593 for the Tioga County incident.

DEP says the affected water wells have been either replaced, treated or returned to their original conditions.

In all three cases, the companies violated the 2012 Oil and Gas Act, the Clean Streams Law and DEP’s Chapter 78 regulations.