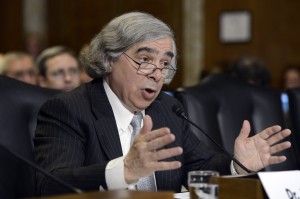 The $2.9 million Penn State project is one of 11 around the country that are working on ways to use thousands of small lenses to concentrate light on to photovoltaic (PV) cells to allow them to convert sunlight to electricity at a higher rate.

The national initiative is designed to overcome the high cost, large size and expensive solar tracking systems of existing concentrated photovoltaic (CPV) technology, and so encourage the wider adoption of solar energy as part of the Obama administration’s effort to increase the use of renewable fuels.

The project was announced by U.S. Energy Secretary Ernest Moniz during a White House conference call with reporters, as the latest in a string of climate-related initiatives by the Obama administration.

Funding for the CPV projects is in addition to $1 billion in federal loan guarantees for commercial-scale distributed-energy projects such as rooftop solar with storage and smart-grid technology, also announced by the administration on Monday.

Moniz said the funding is designed to build on the growth of distributed energy, in which energy sources are decentralized and consumers have more control over their supply. He said some 7,000 megawatts of solar capacity was added across the United States in 2014, about half of which was rooftop solar installed by individuals and businesses.

“We are seeing the beginning of this transformation,” he said on the day of a National Clean Energy Summit in Nevada. “We feel there is a major opportunity to expand this dramatically.”

At Penn State, researchers will build a system that uses optical concentrators, micro-PV cells and a new tracking system to deliver significantly more energy than conventional PV panels. The technology will track the sun throughout the day without tilting the panel.

Moniz said the research projects at Penn State and other universities and private laboratories — collectively called MOSAIC — will seek to overcome market barriers to widespread adoption of the new energy technologies.

The Energy Secretary said solar power is becoming increasingly competitive with that produced by fossil fuels, and he predicted that its price will drop in the coming decade to 6 cents a kilowatt hour, a level he called “extremely competitive.”

In another effort by the federal government to encourage energy saving by individuals, the administration said borrowers seeking Federal Housing Administration loans can do so for properties that have qualified for financing under the Property Assessed Clean Energy (PACE) program.

The program, already operated by a number of states, allows homeowners to finance energy improvements for up to 20 years through assessments attached to property taxes, allowing owners to benefit from the improvements immediately while paying the loan back over time.

Under the new federal initiative, lenders will be able to evaluate loan applications for properties with existing PACE assessments using FHA-insured financing.

Julian Castro, Secretary of the Department of Housing and Urban Development, said the PACE initiative is among those designed to cut carbon emissions and slow climate change.

“We only have one chance to get this right,” he told reporters. “This is the only planet we have.”

Brian Deese, a senior adviser to President Obama, said the new clean-energy initiatives, together with the administration’s recent plan to cut power-plant emissions, would not be derailed by the latest fall in oil prices because oil is not a significant source of electric power.

Asked whether cheap oil might reduce the incentive for consumers to save energy, Deese said: “When you are talking about the electric sector, oil isn’t a fuel that we are currently relying on.”