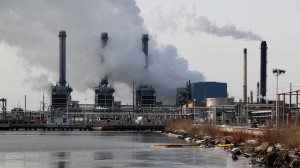 Pennsylvania voters are heavily in favor of new federal efforts to cut carbon emissions from coal-burning power plants, but are split on whether the initiative will be too expensive, according to an opinion poll published on Monday.

An even bigger majority – 72-24 percent – said they believe the initiative is necessary to clean the air, but voters were split 44-44 on whether the initiative will be too expensive.

There was also strong support for the call by Pope Francis – who is due to visit Philadelphia in late September – for more global action on climate change. Sixty-three percent of Pennsylvania voters said they agreed with the Pope’s call, against only 30 percent who disagreed.

The proposed rule is opposed by Republican voters by 51-45 percent, but is strongly supported by voters of other parties.

Support for the plan comes despite Pennsylvania’s history as a top coal-producing state.

“The coal industry has put food on the table for many generations in Pennsylvania, but nostalgia only goes so far,” said Tim Malloy, assistant director of the poll, in a statement. “Voters want cleaner air and they want the feds to police the pollution.”

Pennsylvania voters’ views on the EPA’s initiative are similar to those in Ohio and Florida, which were also polled because no presidential candidate has won the White House since 1960 without taking at least two of the three states, Quinnipiac said.

Peter Brown, assistant director of the poll, said it was noteworthy that the EPA is broadly backed by voters in Pennsylvania and Ohio even though, as industrial states, they would be more heavily affected by the rule than states with less reliance on coal.

Although Pennsylvania voters – like those in the other two states — back the administration’s power plan, they are dissatisfied with President Obama himself, and said by a margin of 72-24 percent that they don’t want four more years of the President. The poll was taken from Aug. 7 to 18.

The Environmental Protection Agency tightened carbon-emission standards on existing power plants, saying they must be reduced by 32 percent from 2005 levels by 2030, or 9 percent more than the agency first proposed.

The rule published on Aug. 3 said states can act individually or together to meet the emissions goal, and that they could use renewables, energy efficiency, carbon capture and storage, or nuclear power to help meet their targets. They can also use emissions-trading programs such as cap and trade, as well as demand-side energy-efficiency programs.

The plan was backed by Pennsylvania Gov. Tom Wolf who called it challenging, but achievable.