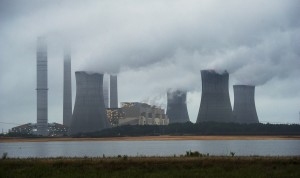 The Obama administration has included a carbon tax on existing power generators as an option for states to meeting emission-reduction goals..

Buried on page 899 of the 1,560-page document are two sentences that may revive a long-discussed but never-implemented way of providing a financial incentive for power generators to cut greenhouse-gas emissions.

“The EPA also notes that the state measures … could accommodate imposition by a state of a fee for CO2 emissions from affected EGUs, an approach suggested by a number of commenters,” the CPP says, referring to Electric Generating Units. “This plan type would allow the state to implement a suite of state measures that are adopted, implemented, and enforceable only under state law, and rely upon such measures in achieving the required level of CO2 emission performance from affected EGUs.”

The idea of imposing a carbon tax to incentivize lower consumption has been discussed in policy circles for years but has gained no legislative traction.

Although its inclusion in the CPP may revive the topic for debate in academic and think-tank circles it is still unlikely to be adopted by states as a tool for achieving compliance with the plan, even among states that otherwise welcome the CPP, analysts said.

“Only a lame-duck president would have put that in,” said Michael Lynch, president of Strategic Energy and Economic Research, a consultancy in Massachusetts. “He’s running it up the flagpole but he’s doing it at dusk and hoping people won’t notice.”

While a carbon tax might, in purely economic terms, be an effective way of reducing carbon emissions by cutting consumption, it is likely to be politically toxic even among states like Pennsylvania that have broadly welcomed the Clean Power Plan, Lynch said.

“The economic rationality is not really related to the political rationality, especially leading up to a presidential campaign, you are going to have an awful lot of voices denouncing the idea,” he said.

While Pennsylvania Gov. Tom Wolf has called the CPP challenging but achievable, he is highly likely to avoid a carbon tax because of the fear of losing businesses and jobs to other states that do not use it, Lynch predicted.

And any move to tax carbon in the Commonwealth is likely to run up against public opposition to higher taxes, especially if they are designed to pay for lower emissions, Lynch said.

“I’m not convinced we’re at the point where people think they need to pay something to save the climate. It’s partly that there’s way too many people out there saying that ‘we have a cheap and easy solution’ when they don’t,” he said.

Lou Pugliaresi, president of the Energy Policy Research Foundation, a Washington think tank, said a carbon tax has no chance of implementation at state or federal levels because of political and competitive concerns.

“Taxes are preferable to command and control but to do them on a state level is kind of ridiculous,” he said.

The inclusion of the carbon tax in the Clean Power Plan might revive the debate in academic circles but is a political non-starter, Pugliaresi said. “The carbon tax is going nowhere,” he said.

Adam Garber, field director at Penn Environment, said he’s in favor of a carbon tax because it would take the energy industry’s externalized costs such as climate change and negative health impacts, and internalize them by building them into the cost of generation.

From a market point of view, he said the concept makes “a ton of sense” as a way of cutting carbon pollution.

But such a tax is problematic to implement because it’s hard to know whether a certain level of tax would achieve the desired level of carbon reduction, and that’s why it’s unlikely to be implemented in Pennsylvania, Garber said.

“One of the reasons it’s probably not something Pennsylvania will look at is if you put, say $50 as a carbon tax you would see x percentage of carbon reduction over time.”

Neil Shader, a spokeman for Pennsylvania’s Department of Environmental Protection, said officials were not immediately available to comment on whether a carbon tax would be considered as part of Pennsylvania’s CPP compliance plan.