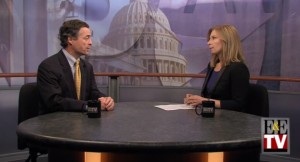 The election of Democratic Governor Tom Wolf has brought many changes to Pennsylvania– notably, the state has shifted in its approach to President Obama’s climate change plan, which seeks to dramatically limit carbon emissions.

Former Republican Governor Tom Corbett  questioned climate science and criticized the White House plan as an attack on the coal industry that threatens jobs. He said the federal Environmental Protection Agency was overstepping its authority.

“Governor Wolf supports this rule. He supports a Pennsylvania response that maintains our position as an energy exporter, that maintains the role of coal in our energy portfolio,” said Quigley. “He believes, as I do, that we can meet this clean-power mandate.”

Pennsylvania is the the nation’s third-largest emitter of carbon dioxide and fourth-largest coal producer. Under Obama’s proposal, the state would be required to reduce its greenhouse gas emissions by about 32 percent over the next 15 years.

Quigley joined other state environmental regulators for a meeting last week at the White House to discuss the Clean Power Plan. Although the EPA did not attend the meeting, Quigley says he expects the agency to release its final rule by early to mid-August. He says the DEP has already been meeting with affected stakeholders.

“We’ve actually met individually with power companies, with environmental organizations to hear what they had on their minds,” he told E&E TV. “Being a new administration, we wanted to make sure that those dialogues were taking early and in advance of the more formal post-rule process.”

Coal still supports about 8,000 direct mining jobs in Pennsylvania and supplies 40 percent of the state’s electricity. The coal industry has called Obama’s climate plan “the biggest obstacle” it’s faced in decades, however coal is also threatened by poor market conditions– particularly the increased use of cheap, abundant natural gas in the nation’s electric power sector.