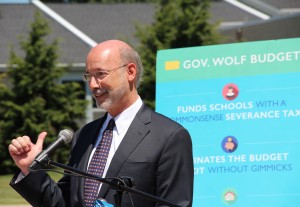 Speaking in Western Pennsylvania, Governor Tom Wolf said Monday he would be “willing to have conversations” about compromises on the 5 percent severance tax on natural gas he’s proposed to balance the state budget.

Wolf and the GOP-controlled legislature have yet to agree on a budget, and are entering their fourth week past a June 30 deadline. A key element of the impasse is Wolf’s insistence on passing a severance tax on natural gas. Republicans have so far resisted the governor’s call. Wolf says he wants to pass the tax to pay for education and to lower local property taxes.

Speaking at Big Beaver Elementary School, Wolf said he would stand fast by his proposal to fund schools with the gas tax, rather than what he calls “smoke-and-mirrors” one-time solutions.

“We can’t suspend reality–two plus two equals four. If we want to spend it, we have got to raise it. And we’ve got to raise it fairly. And education isn’t something we can say ‘Eh…I don’t want to do that.'”

“We cannot take action that would damage this valuable vehicle for economic development and job creation,” Corman said. “At the same time, if we could tailor a tax that may also have provisions that would allow the industry to continue to develop and maintain job growth, then it might be something we consider.”

Wolf’s severance tax proposal calls for a five percent tax on the value of the gas, plus 4.7 cents for every thousand cubic feet. His original budget proposal would also base the tax on a minimum value of $2.97 per thousand cubic feet, regardless of the actual sale price.

Wolf said Monday he was willing to let go of that so-called ‘price floor’ as part of a larger budget deal.

“It was pointed out — correctly–that under certain market prices, (the price floor) could lead to an excessively punitive tax–so i took the floor out,” Wolf said.

GOP leaders would like to keep the current per-well impact fee the state places on shale gas drillers. Local municipalities and counties with shale gas activities keep a portion of the fee to pay for roads and other impacts from drilling. Last year, Washington and Bradford counties brought in the most in fees, at over $6 million apiece.

On average, the fees have brought in $213 million per year. The state’s Independent Fiscal Office has said the impact fee amounts to one of the lowest effective tax rates on shale gas in the nation, but that Wolf’s tax proposal would give Pennsylvania one of the highest rates.

Steve Miskin, spokesman for the Pennsylvania House Republican caucus, criticized Wolf’s stop in Beaver County and other schools to promote his tax plan.

“While he often says we should have a conversation, he never actually has those conversations, but he is travelling the state, holding these media events,” Miskin said.

On June 30, Wolf vetoed a Republican budget that would have included no severance tax.

“He vetoed a budget that fully funded government without raising taxes,” Miskin said.

Jeff Sheridan, Wolf’s spokesman, said the budget the GOP passed was “a failed, unbalanced, status quo budget that the people of Pennsylvania do not support.”

Miskin said Republican leaders were expected to meet Tuesday with Wolf. Wolf’s office said he would be in Connellsville, Fayette County Tuesday morning at another school event.