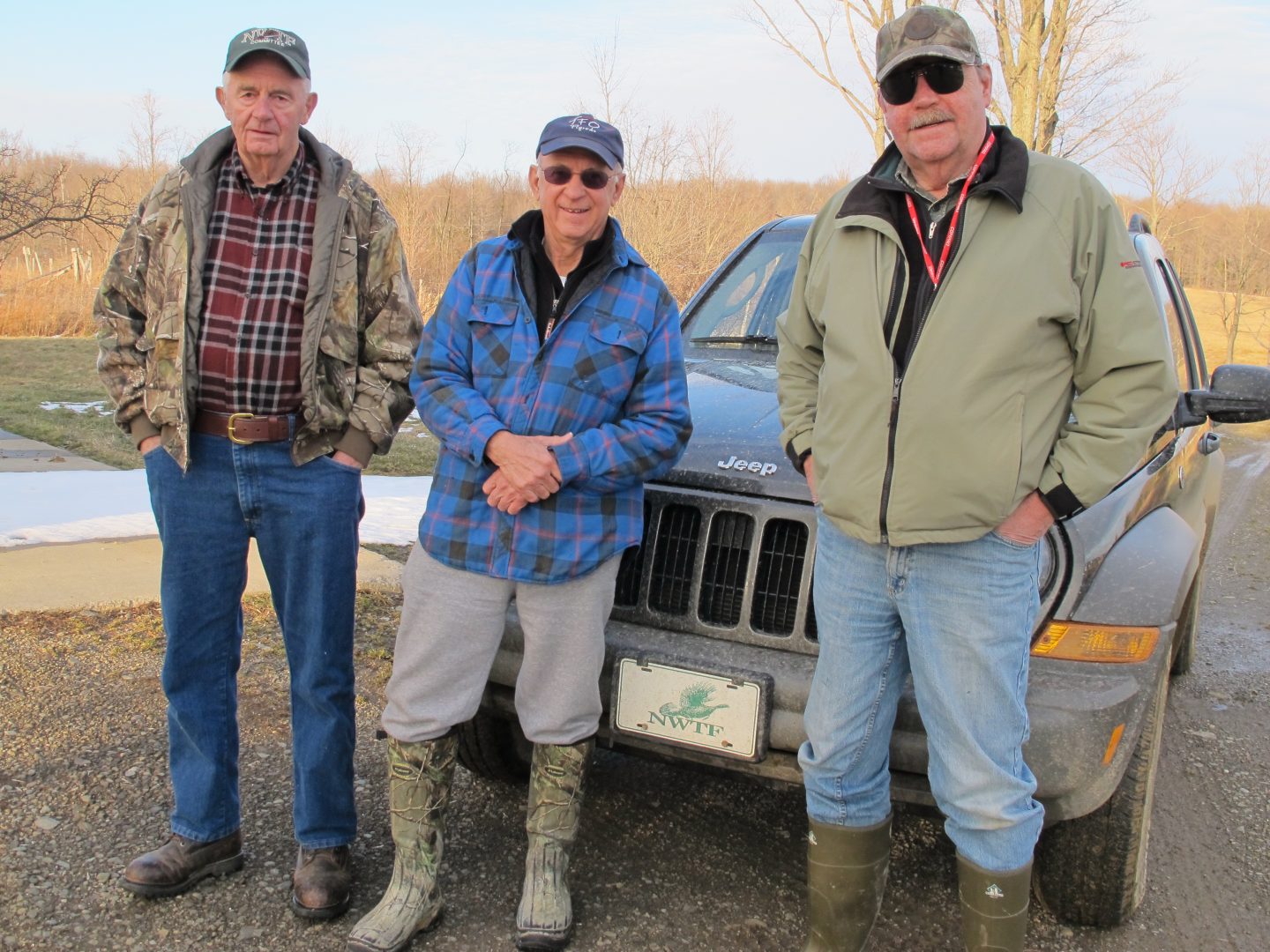 When you drill for natural gas, for every gallon of gas produced, some amount of wastewater gets created as well.
Sometimes it can be simple brine that can be disposed of in simple ways, such as using it to melt  snow on Pennsylvania’s roads in winter. Or to keep the dust down in summer.
But the wastewater can also be pretty nasty stuff, which can’t be cleaned up by water treatment plants. One option is to dump it down an old gas well, shooting it deep into the earth. It’s a method used in thousands of wells across the country.  Only five of those currently operate in Pennsylvania. Click on the above map to get more information on Pennsylvania's deep injection wells.

A proposal to add to that number is stirring concern among some who live in Warren County, Pennsylvania, near the New York state border.

Fueling those concerns are the headlines such deep injection wells, or underground disposal wells, recently made when one such well in Youngstown, Ohio, caused several earthquakes. But residents are also worried about the impact on water supplies and natural areas. With the Marcellus Shale boom, the EPA has received several new applications for deep injection wells in Pennsylvania.
When a Marcellus well gets fracked with a mixture of water, sand and chemicals, a portion of that water returns up the well. The amount that flows up with the gas ranges between 9 and 35 percent of the frack water sent down, over the lifetime of a well. That water contains some of the chemicals sent down the well, and potentially, newly formed contaminants due to chemical reactions underground. At the same time, some of the water that already existed deep within the formation comes up. That water contains contaminants such as heavy metals, total dissolved solids and naturally occurring radioactive material, or NORM. It’s also really salty. A portion of this wastewater gets recycled by drillers, but not all of it.  So they need to find a way to dispose of it.

Karl Kimmich is a petroleum engineer, and co-owner of Lyon Energy, and he faces just that dilemma.
“So my partner and I said, ‘Hmm, OK, what’s our plan going to be? Because we want to continue to produce our gas wells, that’s our livelihood,” Kimmich said.
Kimmich owns about 80 wells in Warren County, in the northwestern part of the state. He doesn’t tap the lucrative Marcellus Shale. Instead, he fracks for natural gas in much more shallow, vertical wells.  For the past decade he was allowed to taken his wastewater to a treatment plant, which discharged it into rivers and streams. But Pennsylvania regulators now frown on that, and he needed to find some other place to put it.
“We looked at our field and we have a certain portion of our field that was a very good gas field, which typically means it would also be a very good water disposal area.”
In other words, some of those gas wells have produced about as much gas as they’re ever going to produce. Think of it this way. Kimmich stuck a straw in the earth, sucked up the gas, and now, there’s an empty space down where the gas once existed.
So Kimmich applied for a permit to take his salty frack water, which could also contain chemicals, and send it back down into the space from which the gas came from, 4,000 feet below the surface, in a rock formation called the Medina Whirlpool Sands.
His gas field is in a remote part of the state, not far from the Tamarack Natural National Landmark Swamp in Warren County, near the New York state border.

A Rare and Unique Swamp

The Tamarack is one of the state’s rare, intact, white-pine glacial swamps, full of rare and endangered orchids, birds, and dragonflies, according to James Bissell. Bissell is a botanist at the Cleveland Museum of Natural History and has done extensive studies of the Tamarack Swamp. The swamp provides the headwaters for the Brokenstraw Creek, which feeds into the Allegheny River.
“We found plants there that haven’t been seen since 1897,” said Bissell.
Bissell says when he learned of the proposed injection well, he was horrified.
“I can’t think of a more inappropriate place to put one,” said Bissell.
But it’s not just an academic in the next state over who thinks using a former gas well to dispose of frack water is a bad idea. Bill Peiffer is a hunter and angler who lives in the area.
“I mean it’s like handing a couple little kindergarteners a gallon of gasoline and a bunch of matches; you know something bad is going to happen,” said Peiffer.
Peiffer grew up in this area. He also used to work for the gas industry. He hunts, traps and fishes in the Tamarack Swamp. Peiffer and his friend Tom Stroup say they found out about the plan by accident.

A Game of Telephone

“Well I’m sitting there minding my own business,” says Stroup.  “And I get a call from a township supervisor and he says, ‘Something is kind of disturbing me and I want to know if you know anything about it.'”
Stroup says the supervisor learned about the injection well plan from a road worker in an adjoining township. The township supervisor relayed what he heard, and told Stroup that Marcellus drilling waste was going to be dumped down old wells in the area.
To compound the confusion among local residents and officials, the EPA scheduled a public meeting in the wrong township, 20 miles away.  So Tom Stroup conducted his own investigation.  He went door-to-door in the right place, the borough of Bear Lake, to ask people about it.  He found that no one, no farmers and no residents living near the proposed sites, knew anything about Kimmich’s planned injection well.

Sloshing Around in the Swamp

Tom Stroup, Bill Peiffer and their friend Tom Savko, recently drove me into the Tamarack swamp.  They’ve heard the argument that the wells have been reinforced to prevent any leaks. But they’re not buying it.
“This area 25 to 35 years ago was drilled all over for the Medina formation,” Savko said. “And these wells are all compromised because of their age. The casings are compromised.”
Tom Savko says after 30 years, the cement well casings, which are meant to keep the gas in and the aquifer water out, likely have fractures. This, says Savko, means the wastewater could leak out into the aquifer that feeds the Tamarack Swamp.
“If they were bringing in old Medina brine and injecting it into these wells here, wouldn’t be anyone here have a problem with it. It’s the fact that they’re going to bring high volume slick water frack fluid flowback here with all these chemicals from other parts of the state.”
Savko’s comment underlines an important point.
There’s another good reason for Karl Kimmich to want to turn his old gas wells into disposal wells — money.  All the Marcellus Shale drillers from the northeastern and southwestern parts of the state are also looking to get rid of their wastewater. Kimmich says he’s gotten dozens of calls from other drillers who want to pay him to dispose of their frack water in his wells. At the same time, the success of those Marcellus drillers means the price of natural gas has plummeted, putting pressure on Kimmich’s bottom line.

Bill Peiffer and the two Toms have another concern about Kimmich’s plan: old, abandoned wells. They say the area is full of them, some known, some unknown.
The day I went with them into the swamp, we walked about a half mile from one of Kimmich’s former gas wells that might become a disposal well.  We came upon a big rusty metal pipe that’s poking about four feet out of the boggy ground. Bill Peiffer told me it’s a remnant of an old oil well, drilled back in the early 1900’s. It has jagged edges at the top, and oil is spewing out and into the swamp.  He worries that with enough pressure from the disposal wells, old abandoned wells like this one will provide a pathway for the wastewater to come back up.
“This well is liable to go ballistic because of all that pressure underground in that Medina geologic formation, or in another formation, or in the groundwater,” Peiffer said.

Tom Stroup says that’s not the only abandoned and unplugged well in this area.  At 77 years old, he says he’s been trapping in the area since he was seven.  Stroup says lots of wells drilled in this area over the past 100 years were just cut off and bulldozed over. He worries those old wells are corroded, and full of holes. And what’s worse, he says no one knows where all of them are.
Tom Savko says he worries the pressure exerted on injection wells could force the fluid up into older wells that have sprouted leaks:
“Now, they want to put this fluid in here, not a compressable gas, a fluid, this frack water, and it’s not gonna say: I don’t like it? It’s like someone cramming something down your throat with a long wooden spoon? Kinda? Does that make sense?”
Karl Kimmich, the natural gas company owner, says he’s heard all of those arguments but he’s convinced that the safety precautions have been met.
“The types of wells that we’re disposing into, there are tens of thousands of these wells in Pennsylvania,” Kimmich said. “And we’ve got a great database on the geology and rock characteristics and we know at what level we need to limit our pressure and we know when we’re done. You shut down, you plug and abandon the well and the water stays where the gas was for 400 million years.”
Trapper Tom Stroup asked Kimmich: What’s in it for the people who hike, trap and live near the swamp?
“Well, he said, it’s going to create jobs,” said Stroup.  “And I said, ‘Karl, what jobs?’ Well, he thought about it and he said well we’ll probably need a night watchman. Yeah. And we’re probably going to need heavy equipment to dig a pipeline. Yeah, I said, that’s a couple of folks.”
So who’s right?
The EPA responded to the permit review, saying Karl Kimmich’s company, Bear Lake Properties, properly retrofitted the wells with extra layers of protection. EPA officials say that old, oil-spewing well is far enough away from the proposed disposal wells to pose no problem. And, the EPA officials say they’ve done substantial modeling to insure the pressure would not exceed what the underground formation could handle.
But the old guys who’ve been trapping and tramping around the swamp for years? Well, they remain unconvinced.