DEP's Dimock Decision Based On 2010 Agreement, Not Water Quality 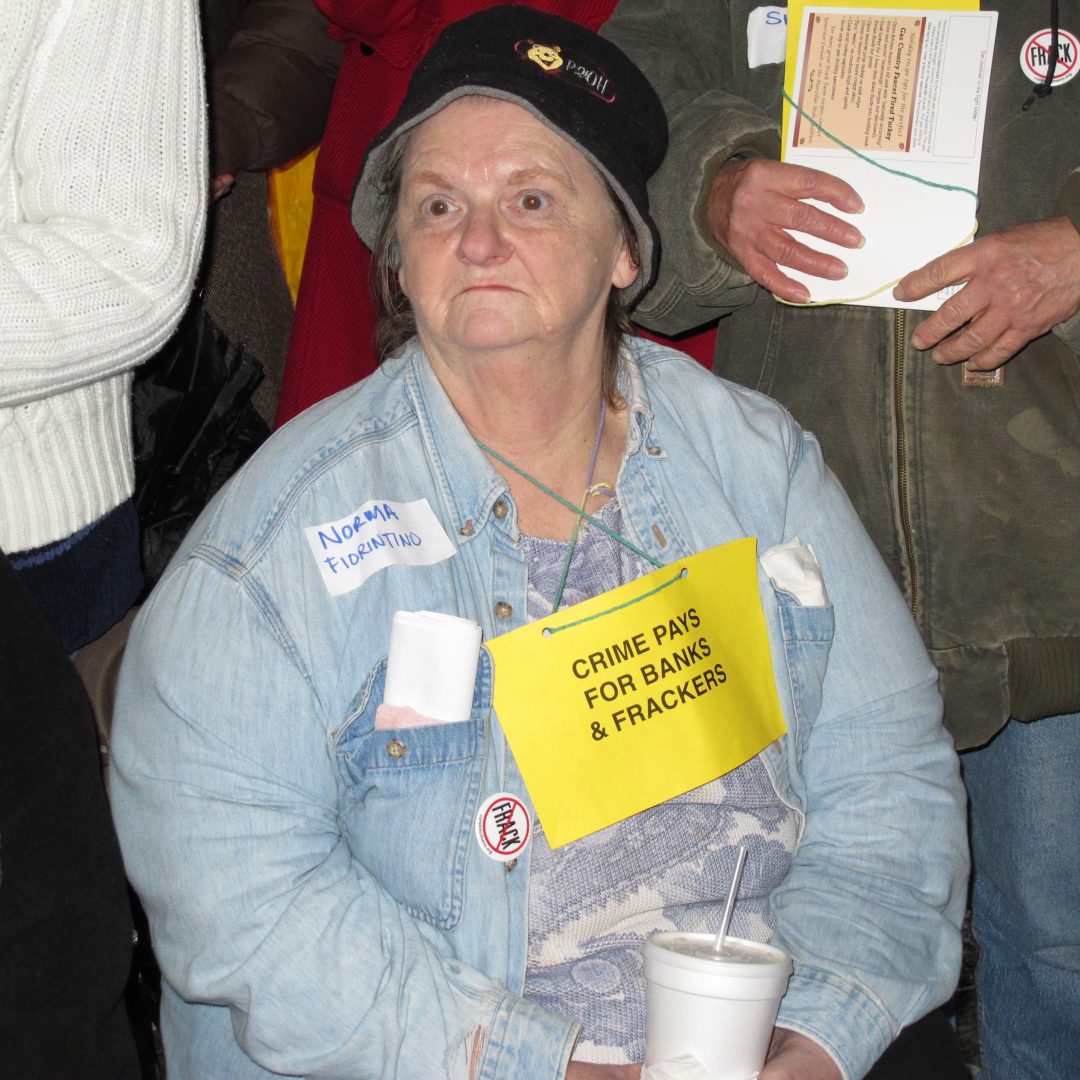 Actor Mark Ruffalo holds up a jug of water drawn from a well in Dimock, Pa. Ruffalo spoke at a rally this week after helping deliver fresh water to affected residents.

As anti-natural gas drilling protesters converged on Dimock, Susquehanna County this week to protest the Department of Environmental Protection granting Cabot Oil and Gas the right to stop delivering water to families whose water supply was contaminated, many activists on either side of the issue viewed the DEP decision as an endorsement of the community’s current water quality.
In fact, DEP’s decision allowing Cabot to stop providing water to Dimock residents had nothing to do with whether or not methane levels have increased or decreased at the affected water wells. “The [Consent Order and Agreement] didn’t require DEP to deem the water safe before permitting Cabot to stop delivering water,” explained department spokeswoman Katy Gresh via email.
Indeed, a December 2010 agreement between DEP and Cabot required the company to continue providing potable water to affected Dimock residents “until Cabot [received] written notice from the Department that it has complied” with a set list of requirements.  Improved water quality was not among the criteria.
DEP began investigating Cabot after a January 1, 2009 explosion at a Dimock resident’s water well. State inspectors documented multiple violations at Cabot wells, including faulty well casings, spilled diesel fuel and spilled drilling mud. DEP also documented high methane levels and “combustible gas” in water wells located near Cabot drilling sites. In the initial Consent Order and Agreement between DEP and Cabot, dated November 4, 2009, the agency determined, “the presence of dissolved methane and/or combustible gas in the 10 Affected Water Supplies occurred within six months of completion of drilling of one or more of the Cabot Wells. As such, Cabot is presumed to be responsible for the pollution to these 10 Affected Water Supplies.” Cabot signed onto this document, which ordered the driller to

Unlike the later December 2010 agreement – which we’ll get into shortly – the initial Consent Order and Agreement (COA) required Cabot to continue providing water to Dimock residents until, “the Department notifies Cabot, in writing, that the Department has determined that the Affected Water Supply has been restored such that Cabot is no longer required to provide such purchased water.” In other words, DEP would test the water sources.
“18 of these families had their water contaminated by gas migrating from poorly constructed gas wells. DEP found this repeatedly,” said former DEP Secretary John Hanger, who ran the department during the last two years of the Rendell Administration.  “Testing removed the possibility that this was preexisting gas.” Cabot has disputed this conclusion, releasing multiple studies showing methane migration is a common, natural occurrence in the Dimock area.
In 2010, the COA between Cabot and DEP was revised twice. The final agreement, reached in December, is the document dictating the agency’s current stance. In it, Cabot makes it clear the company disagrees with DEP’s findings, “however, Cabot agrees to and shall fullfil all of the terms and obligations of this Consent Order and Agreement Settlement.” The December 2010 document laid out harsh penalties for the driller. It required Cabot to pay the impacted families settlements worth twice their property values, a total Hanger said exceeded $4 million. But the document did not include water testing as a criteria for Cabot to stop providing clean water to the impacted families.
Instead, Cabot had to fulfill the following obligations:

In October, Cabot informed DEP it had met all these requirements, and asked for permission to stop delivering water to the Dimock families. Acting Deputy Secretary Scott Perry approved the request, and Cabot stopped providing water on December 1. In a letter to the Chambersburg Public Opinion, Secretary Mike Krancer defended the decision. “We were guided by a legal agreement dating to the previous administration,” he wrote. “The agreement…required Cabot to satisfy specific water provision obligations and meet certain requirements….Cabot satisfied those requirements, and the law, in turn, requires DEP to follow its obligations.”
In a statement, Cabot said it “continues to offer to install DEP-approved water treatment systems to affected residents. Residents across the Commonwealth have successfully used filtration systems as the time-tested solution to remove methane from water.” The statement continued,” all of the homeowners who accepted the methane treatment systems in Dimock have seen a 96%-98% reduction in methane concentrations.” But several families have refused Cabot’s offers, saying the filtration systems will not remove harmful chemicals.
DEP’s decision did not sit well with several impacted families. At the rally on Tuesday, residents held up a jug full of murky water they say came from their well. Craig Sautner challenged DEP Secretary Michael Krancer to drink his water.
“He says there’s nothing wrong with the water in Dimock. Does that water look like there’s nothing wrong with it? Does he drink it?”
Is the water safe? While DEP has not been conducting tests, Cabot has provided water samples to state-laboratories. The federal Environmental Protection Agency has reviewed the data, and found the water “does not indicate an immediate health threat to well water users.” In a statement, the agency said it “will continue to review the latest information,” noting it had received more than 300 pages of well water data from Dimock residents.
Several Dimock residents express scepticism about Cabot’s tests. Ray Kemble says he never gave Cabot permission to go on his land and test his water.
“They come here and think they own the place just because you signed a lease with them,” said Kemble.
Kemble’s well is now disconnected from his house, and he gets water from a water buffalo that stores trucked in water. He says he didn’t see where Cabot workers took water samples, and doesn’t trust the lab results.
Kemble and ten other Dimock families are challenging the DEP decision. At an Environmental Hearing Board yesterday, they asked a judge to overturn the agency’s ruling. As the Scranton Times-Tribune wrote,

The Natural Resources Defense Council, an environmental organization, joined the families’ attorneys Wednesday in asking the judge to reverse the state’s determination that Cabot fulfilled the terms of a December 2010 settlement allowing the deliveries to stop. Further, the attorneys asked the judge to throw out the “illegal” section of the settlement that fell short of state laws requiring drillers to “restore or replace” water they damage.
The attorneys argued the state wrongly ignored the harm the families would suffer if forced to drink well water they said contains contaminants including metals, solvents and manufactured chemicals at levels above state and federal drinking water standards.