Research on Marcellus Drilling Hampered by Lack of Data, Lack of Funding, and Concerns of Bias | StateImpact Pennsylvania Skip Navigation

Research on Marcellus Drilling Hampered by Lack of Data, Lack of Funding, and Concerns of Bias 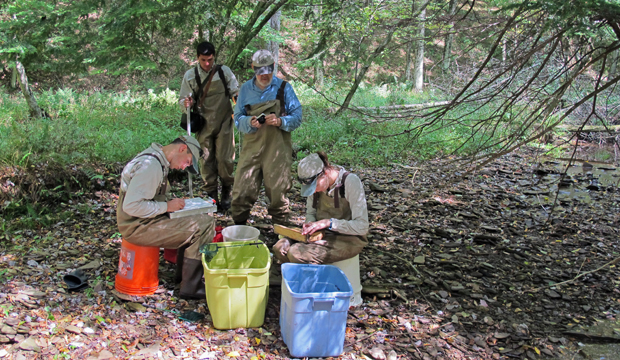 Pennsylvania Governor Tom Corbett has said he wants to make decisions about drilling for natural gas in the Marcellus Shale based on good science.  But the effort to research the impact of shale drilling has been hampered by lack of funding, lack of data and claims of bias.
During the next several months, lawmakers in Harrisburg will be drafting legislation based on Governor Corbett’s proposals for new gas drilling rules.
“We need to protect the water,” Corbett told a group of Township Supervisors in April.  “We need to protect the environment. But we must do it based on science and not emotion.”

Corbett’s proposals are based on recommendations from his Marcellus Shale Advisory Commission, which released a report back in July.
So what does that have to do with a bunch of scientists from Philadelphia looking for salamanders deep in a forest, in north central Pennsylvania?
Researchers from the Academy of Natural Sciences scour a small stream in the Susquehannock State Forest for salamanders, brook trout and algae.  This painstaking work is part of a larger effort to measure the impact of natural gas drilling on surface water.
More than 3000 Marcellus Shale gas wells have been drilled in the last five years in Pennsylvania.  But data on their environmental impact are hard to find. Richard Horwitz is a senior biologist with the Academy of Natural Sciences.
“There’s a lack of data because, this particular technology in this setting is very new,” said Horwitz. “This is something that I think has just exploded in terms of how much is going on and I have a feeling it even took regulatory people by surprise realizing how fast it would grow.”
Gas drilling is not new to Pennsylvania, but to get at the gas in the Marcellus shale formation, drillers go to new depths, drilling deeper and at higher pressure than conventional wells. They use water, sand and chemicals to extract the gas through a process called hydraulic fracturing, or fracking. The Marcellus wells also turn, and become horizontal.  Regulation of this drilling is left to states. So the federal government collects no uniform data on the practice.   And that has researchers playing catch-up.
But who pays for it? More and more researchers are seeking out private foundations. Diane Schrauth is a program director with the William Penn Foundation, which helps fund the Academy’s stream study.
“Every day we’re approached by people throughout the region and state, who have issues that they’re looking to get answers to,” said Schrauth.
“Everything from air quality, to forest fragmentation, to habitat impacts, to water quality impacts. So I think there’s just a lot that’s unknown right now.”
It’s expensive to do the kind of research the Academy team is doing in rural Pennsylvania. The price tag for this study is about $150,000 dollars. Researchers look hopefully to private foundations like William Penn, as a neutral source of money.
“They are struggling to not appear biased so many of them won’t take industry funding.”

“They are struggling to not appear biased so many of them won’t take industry funding,” said Schrauth. “Many of them are concerned about how to get funding for this work that is independent of the industry. So we’ve had some questions about that internally. What is the role of the philanthropic dollar?”
Richard Horwitz says he’s used industry funding in the past, and does not consider it “dirty.” But he says for the Marcellus Shale, he stays away from industry dollars.
“This is controversial enough that if we find something big, we expect the results to be looked over with a fine tooth comb,” said Horwitz. “We really want to dot our I’s and cross our T’s and really do a very thorough job of documenting what we’re doing and making sure that we can demonstrate first, that we aren’t biased and second that it’s good science.”
Who pays for what can get tricky. One institution that has garnered a lot of criticism for taking industry funding is Penn State University, which some activists accuse of acting as a cheerleader for Marcellus Shale drilling.
A recent jobs study by the university was funded by the Marcellus Shale Coalition, an industry group. But a program to put together a surface water database got funding from the National Science Foundation.
Michael Arthur is a professor of geo-science at Penn State and the head of the Marcellus Center for Outreach and Research, which takes no industry money. But Arthur says he does take industry money for some of his own research. He says the industry grants help his students.
“And lest you say well yeah, but you got this widget in your lab and its paid for with industry money,” said Arthur. “And I’ll say yep, it’s there and its being used for research beyond what industry was interested in and the students are trained on modern techniques that they otherwise wouldn’t have access too because no one was going to buy that for us.”
But Arthur says he’s careful not to take industry money for research that looks at controversial gas drilling practices, like his work on how methane leaks into private water wells.
“The research I’m involved in, the stray gas, that’s not industry funded,” he said. I wouldn’t take industry money for that at this point. But the geology of the Marcellus Shale and its geochemistry and its hydrocarbon potential, these are areas I do work with and that’s primarily funded by industry.”
Industry spokespeople say they’re committed to good science, that their companies are primarily staffed by scientists, and they feel that when it comes to the Marcellus, there’s bias on the other end.
Travis Windle is a spokesman for the Marcellus Shale Coalition, a group that includes about 95 percent of the companies drilling in Pennsylvania. Windle says several studies on gas drilling’s impact on water supplies were slanted against the industry.
But he says gas companies do respond to good science.
“A perfect example is how we proactively dealt with the wastewater discharge,” said Windle.
Up until last spring, drillers had been sending wastewater to poorly equipped municipal water treatment facilities, which discharged it into Pennsylvania’s rivers and streams.
“Now, because of some straightforward science and facts put forth by some Carnegie Mellon researchers, we said we were going to unilaterally as an industry stop these practices,” said Windle. We did that, we worked with the DEP to do it, and it was a monumental environmental achievement.”
Back in the forest, Richard Horwitz’s team is trying to figure out what gas drilling’s impact on aquatic life might be, even when drillers follow all the rules. But he expects the results may be disputed. “Whatever answer we come up with, there may be people who assume we were bought off,” Horwitz said.
In Harrisburg, lawmakers are putting together new legislation about natural gas drilling to consider next session. But they won’t have the good science from Horwitz and his crew until the end of 2012.

When It Comes To An Impact Fee, It's A House (Caucus) Divided