Pike Off OTA demonstrators hold signs outside of the Association of Oklahoma General Contractors.

Metadata from publicly posted meeting agendas appear to indicate Oklahoma turnpike staff altered agendas for a pair of public meetings leading up to the announcement of a controversial $5 billion turnpike project.

Attorney Richard Labarthe produced documents showing metadata taken from the agendas. According to the data from the OTA’s Jan. 25 and Feb. 22 meetings, the agendas were modified after the meeting took place. StateImpact Oklahoma independently verified this data.

Similar after-meeting revisions aren’t found on any other meeting agendas posted by the agency for the last two years.

The OTA announced its ACCESS turnpike project on Feb. 22. Since then, the project has drawn widespread pushback, including legislative organizing and judicial challenges.

Labarthe and a team of attorneys are representing dozens of plaintiffs affected by the turnpike project in a lawsuit filed in May. The suit alleges the agency violated the Oklahoma Open Meeting Act by failing to sufficiently inform the public of the ACCESS project with the available agenda documents (available here: January and February).

The metadata don’t include a version history showing the original agendas in their pre-modified forms. StateImpact Oklahoma filed an Open Records Request with the OTA Wednesday for these original documents. Labarthe said his team plans to ask Judge Tim Olsen at a hearing next week to allow forensic experts to look at the OTA’s hard drive.

On Oct. 18, the plaintiffs’ counsel filed a motion to allow the deposition of Johnson. Later that day, the agendas’ metadata was discovered, and a supplemental document was filed asking the court to order the OTA to produce Johnson and Gore for depositions, as well as for the original agendas.

“The OTA has relied on these agenda items to buttress its contention that it has complied with the [Oklahoma Open Meeting Act]. (…) [In] the case of both the January and February agenda, the metadata shows that the agendas were modified and re-uploaded to the OTA website after the meetings took place,” the document reads. “Compliance with the [Oklahoma Open Meeting Act] by posting the agendas is at the heart of the Plaintiffs’ case.”

When it comes to ACCESS, what’s on the agendas, and what happened during the meetings?

On the January meeting agenda, there is no mention by name of the ACCESS project, but rather “SP [Special Project]-65,” which is penned later in an addendum as “Long Range Turnpike Improvement and Expansion Program.”

The agenda item is to approve a program management contract not to exceed $4.96 million for the engineering firm Poe and Associates. That meeting’s minutes show the contract was approved unanimously. 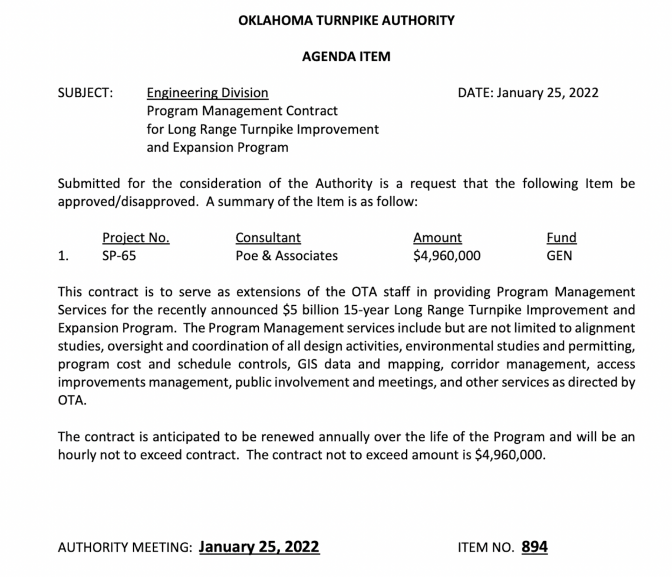 Courtesy of the Oklahoma Turnpike Authority

On the February meeting agenda, the ACCESS project appears on a vote to award design contracts. 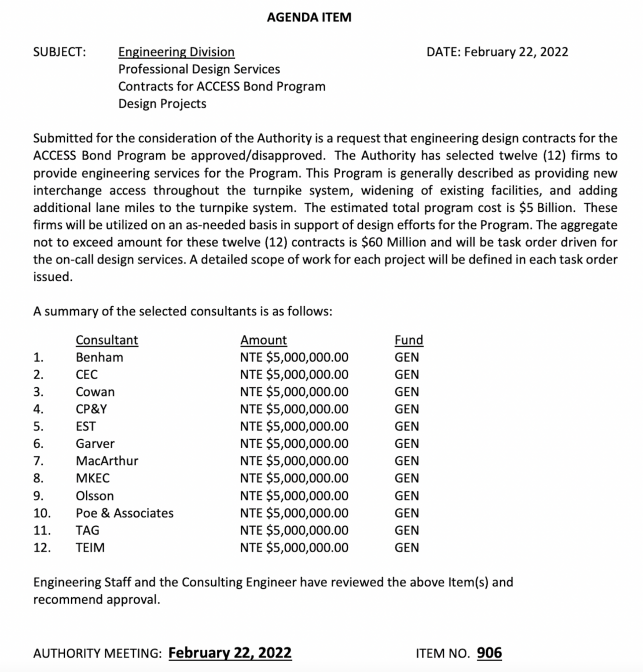 Additionally, two other right-of-way management contracts not to exceed $2 million each were awarded to Poe and Associates and the firm TEIM Design. The February meeting minutes show all engineering contracts were approved unanimously.

Response from the OTA

An OTA spokesperson denied the allegations in a statement Wednesday.

“Allegations of wrong doing by altering or modifying agendas following two OTA Board meetings based on a search of metadata are both ill-informed and inflammatory,” the spokesperson wrote. “The only modification to the documents posted to the OTA website was the addition of signatures, certifying the meetings occurred.”

In response, the spokesperson was asked why out of the last two years, only two months’ agendas show modifications after the meetings had taken place, and why it would take nearly four weeks to add certification signatures for the January meeting when it only took a day to modify the February meeting. StateImpact will update with a response when available.

While the January and February agendas do show the signatures of OTA Deputy Director Joe Echelle and Executive Director Tim Gatz on the meetings’ motions to adjourn, the motion to adjourn isn’t signed on any other agendas for the last two years.