Pike Off OTA demonstrators hold signs outside of the Association of Oklahoma General Contractors.

Supporters of Gov. Kevin Stitt were met with a barrage of turnpike protestors outside of a Tuesday morning campaign fundraising luncheon. The governor — whose event advertised a suggested $1,000 donation per plate — entered and exited through a side door and never acknowledged demonstrators. 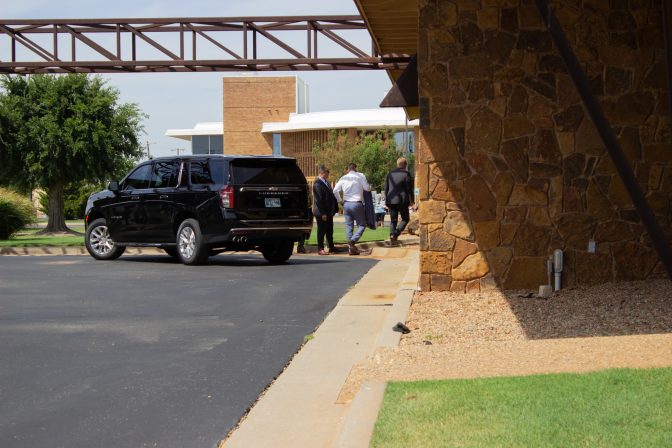 Gov. Kevin Stitt enters through a side door. Stitt did not acknowledge the group of protestors at the front of the building.

About twenty protestors from the anti-turnpike organization Pike Off OTA carried signs, spoke through a bullhorn and held crime scene tape outside of the fundraiser held at the Association of Oklahoma General Contractors.

Pike Off OTA — whose Facebook boasts over 8,000 members — was formed after the announcement of the $5 billion, 15-year ACCESS Oklahoma turnpike project. The ACCESS program includes several new turnpike paths — three of which the organization says will wipe out over 600 homes.

Pike Off has mounted an active opposition to the plans: it’s held informational events, filed two lawsuits, rallied lawmakers to limit the OTA’s reach through legislation, successfully called for a legislative interim study on the OTA and continues to push for an independent audit of the agency. 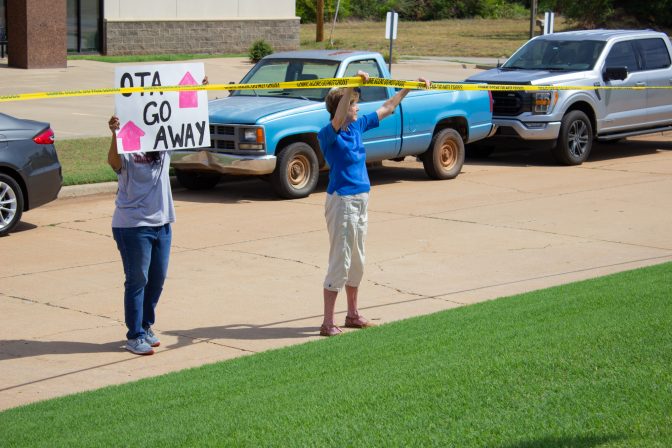 A demonstrator holds up crime scene tape in front of the Association of Oklahoma General Contractors, where the fundraiser was held.

Most demonstrators are residents whose homes are in the paths of several proposed turnpike routes in and around Norman. Protestor Roberta Provost, who is 80 years old, said the news of her home being demolished to make way for a toll road was devastating.

“I would’ve died there. That’s my home,” Provost said. “I raised my grandkids there. I have my memories there. The peace and quiet, the deer. It’s killing us. It really is killing us.”

Though Provost is a Republican, she said Stitt has lost her vote.

“I feel betrayed by the state because like a dummy, I voted for [Stitt],” Provost said. “Believe me, I’m not voting for him this year. I’ll vote Democrat.”

Provost’s opinion echoes that of other Pike Off Republicans. Terrie Clubb, whose house is also in the path of one of the proposed extensions, said Stitt should follow the state Republican party platform, which explicitly calls for a moratorium on new turnpike construction until the existing turnpikes are paid off.

“I’m a Republican, and he’s going to force me to vote for a Democrat,” Clubb said. “[Oklahoma is] going to be in debt forever. We will be paying for this 100 years from now.” 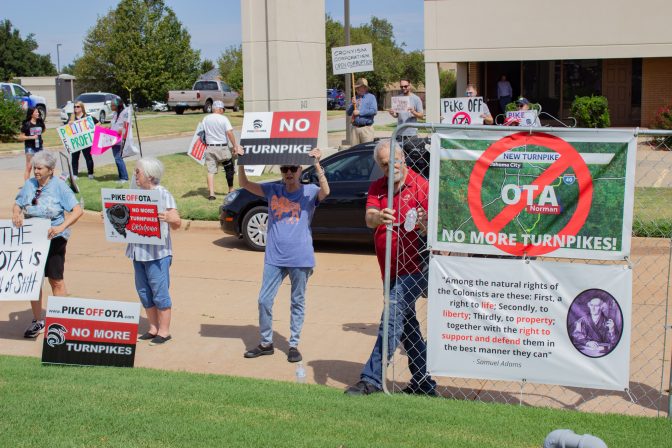 Demonstrators gather with signs in front of the fundraising event.

Turnpike opponents are quick to point out what they say is a telling sign the state doesn’t need any more toll roads: on average, turnpike revenues amount to less than 63% of initial five-year projections, according to a 2016 investigation by The Oklahoman.

State transportation officials argue new routes are necessary to divert traffic from I-35 in and around the Oklahoma City area, but Pike Off members contend the new routes won’t make enough of a difference to justify the displacement of hundreds of Oklahoma families. 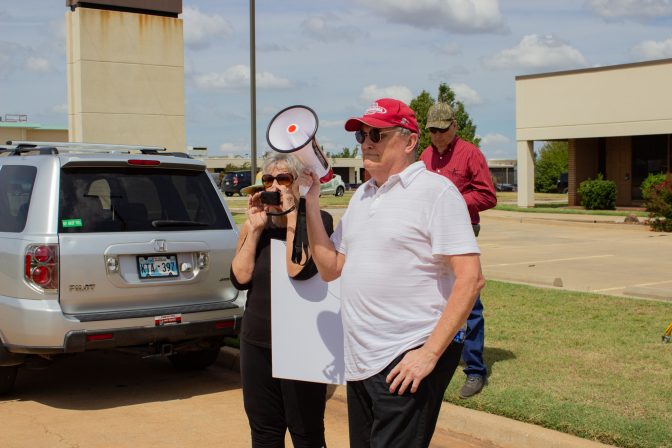 A Pike Off demonstrator speaks through a bullhorn aimed at building housing the fundraiser. “I would just like to say,” she said. “A man of integrity would walk out here, walk on those steps, come down on the grass knoll and say, ‘I want to talk to you.’”

Clubb said she doesn’t want to leave the community she and her husband have lived in and loved for 12 years, but she may have to.

“With all the turnpikes Oklahoma is allowing, why would I ever stay in this state?” Clubb said. “There’s just nothing here for us anymore.”