Darla LeBlanc thought there had to be some kind of mistake.

She remembers the day vividly. Gov. Kevin Stitt had just announced Oklahoma’s turnpike network was about to expand significantly, and that expansion was going to take a toll road right through her property.

“February 22… I saw a post on the Ward 5 Norman Facebook page that had 100-something comments. And I looked at it, and it was about, ‘Hey, has anyone seen this proposed turnpike?’” LeBlanc said. “And then I looked at the link, and I looked at the map, and I said, ‘What? Don’t they know that people live here?’ Like, I thought that was a mistake. I thought something must be wrong. I had no idea that a few people in suits in some corner office could take a map, draw a line on it, and destroy thousands of people’s lives.” 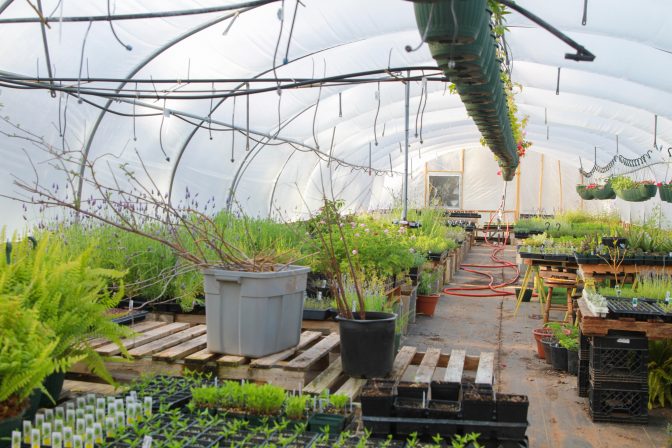 The LeBlanc’s greenhouses features a variety of plants, including many meant to attract pollinating insects.

Though the Oklahoma Turnpike Authority (OTA) has not yet confirmed the number of houses to be demolished to build the turnpike, the resistance group Pike Off OTA — nearly 7,000 members strong — has counted 665 homes currently in the paths of the proposed South Extension and East-West Corridor. They estimate over 4,700 homes sit within a half-mile of the routes and are concerned these properties could depreciate in value.

The OTA has said its ACCESS Oklahoma project will take 15 years to complete, but as property owners are staring down an exceptionally volatile housing market, concern about availability, especially in Norman, runs high.

According to the real estate website Zillow, as of publication, there were 263 houses available in Norman, though that number includes some houses on or near the turnpike paths. Homes in rural settings are even rarer. Only 19 properties with an acre or more of land – which is the size of many of the properties in the South Extension’s path – are for sale.

In response to a records request for individual purchase prices for several Turner Turnpike property acquisitions, the OTA told news agency CNHI it was exempted from disclosing that information, citing the material was potentially “private financial information.” Later, the agency reversed course and released the numbers.

Sen. Mary Boren, D-Norman, filed Senate Concurrent Resolution 28 on May 9, which would require the OTA to release information about any property acquired for the Kickapoo and ACCESS Turnpike projects in Cleveland County.

“There’s no way for the average person to negotiate in equal standing with the Turnpike Authority without knowing what property has been bought and sold, and how much it was bought and sold for,” Boren said. “There’s no Zillow out there for turnpike acquisition of property. The only thing we have to go off of is public records and whatever they’re willing to disclose.”

Upon passage, the agency would have to release all deeds, the amount paid for property, the amount of state funds used to purchase property for right-of-way access, copies of the contracts between state and property owners, and any rental or lease agreements.

How does property acquisition work?

In an interview with StateImpact, Kirsten McCullough, the environmental team leader for one of the engineering firms working on the ACCESS project, said environmental impact surveys will be completed prior to any property acquisition. The one exception would be residents who approach the OTA now about purchasing their homes.

According to handouts provided by the OTA at information sessions, the agency will notify residents whose property is in the path of the turnpike, hire an appraiser to assess the property value, and “in most cases,” the agency will have a second appraiser review the appraisal.

According to the handout, if a resident doesn’t agree with the appraisal, the agency “will give full and complete consideration to the property owner’s concerns and negotiate in good faith to reach a fair settlement for both the owner and OTA.” If a settlement can’t be reached, the OTA will defer to the eminent domain process.

According to an informational video on the ACCESS Oklahoma website, if eminent domain is used, the OTA would first file paperwork with the district court in the county the property is located. A judge would then appoint three disinterested landowners — termed “commissioners” — to inspect the property and file a just compensation report. The OTA would then deposit with the court the determined amount by the commissioners. By that point, the OTA normally obtains entry to the property, and the resident normally has access to the deposited funds.

However, in cases where the resident or the OTA objects to the amount decided on by the commissioners, the question could be put up to a jury trial for final determination. According to the video, because a jury trial can take years, the OTA would continue negotiations with the resident in the meantime.

After closing on the property, the resident normally has 30 days to move out. According to the handout, the agency can negotiate a one-year Occupancy Agreement, which may be able to be extended.

Darla and her husband Cedric LeBlanc — who were high school sweethearts at Norman High — don’t want to leave the house and the town they’ve invested their hopes and dreams in.

Norman has too many memories — Darla was the drum major of the high school marching band, Cedric has spent the last 13 years cultivating a garden and nursery on their property, and their 8-year-old son Nolan was even born in their living room. But for now, the family’s plans of a future in Norman are on hold.

“Norman is a big part of me, and I had never thought I would leave. It’s really hard to consider leaving, but we have talked about it after this,” Darla said. “It feels like Oklahoma doesn’t want us; our government doesn’t want us.”