Bristow High School librarian Allison Hilburn poses for a portrait in the library. Hilburn has spent the last three years working on improving the Bristow Library collection by adding books students would like to read.

Amid noisy controversies, Oklahoma school librarians do their best to create ‘informed citizens’

The books in Oklahoma school libraries don’t end up on their shelves by accident.

“But they are about some hard topics: drug use, sex, suicidal thoughts,” Hilburn lists off on a cold January day.

The book is thick. It might intimidate some students. But Hilburn, who as the librarian also doubles as the person who runs prom and as a substitute teacher, said her job is to show that the book – and many more like it – shouldn’t be intimidating.

Simply getting students reading creates a love for it. That’s the goal of a librarian.

“Whether we read a ton in our jobs in the future or anything like that, it’s not that aspect of that, just the aspect of critical thinking, of being an informed citizen,” she said.

The books in Oklahoma school libraries don’t end up on their shelves by accident. Amid efforts by a few parent groups and legislators to limit what appears in school libraries, librarians go to great lengths to get more kids reading.

It wasn’t easy for Hilburn to become a librarian.

She did it almost a decade ago when her daughter was a toddler, and she was a full-time English teacher at Bristow High School. The time it took is a “blur” as she balanced classes at Northeastern State’s Broken Arrow campus with her job.

On top of that degree requirement, there’s also an aptitude test that librarians must pass before they can take a job.

Tiffany Neill, deputy superintendent of curriculum and instruction at Oklahoma’s State Department of Education, oversees library regulations in the state. And there’s a lot of qualifications for good reason.

Librarians don’t just sit and read books all day once they move into the role.

It’s a difficult job. Maintaining a collection of books on a shoestring budget is hard enough. But librarians also have to be ready to help any child in the school when they get inquisitive.

“They have a lot of skills in helping students understand how to conduct research,” Neill said. “That’s a major skill for students, for college and career readiness. And so they help design programs within their schools to help students gain those skills and work really alongside other teachers in the building.”

There also aren’t enough librarians. Oklahoma’s teacher shortage gets many headlines. But the librarian shortage is a real challenge, too.

So far this school year, Oklahoma’s State Board of Education has approved a waiver for 23 library media specialists who don’t meet all the requirements. That’s a similar number to years past.

Neill said the good news is that those are temporary, and the people who are filling the role are often working toward meeting all the requirements for the job.

Hilburn has poured herself into curating the book selection inside Bristow High School’s Library. She’s thrown hundreds away. But that wasn’t about censorship. Some of those books were decades old and hadn’t been checked out in years. Much of the nonfiction collection was from the 1990s.

“I wanted that to be up to date because I wanted when teachers came in with their classes, I wanted them to be able to have that information to research. So it’s kind of been my focus,” she said.

She’s carefully added hundreds of books to the library in the last three years. And that’s what made it so surprising when she faced a challenge. 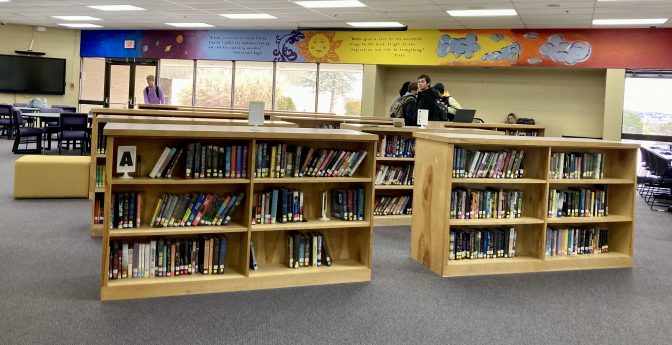 Bristow High School’s library. In 2021, a community group challenged a number of titles inside the library, which led to a handful of books pulled, but most were retained.

An effort to ban books

Bristow has a process for reviewing books that parents don’t like.

Parents can turn in a form that’s reviewed by librarians, school leadership and ultimately the district school board. It’s similar to policies many districts have across the state.

Over the last three years, Hilburn has slowly been replacing hundreds of titles. She knows her library well, so she was surprised when a community group called on Bristow to remove almost 50 titles from the district.

Some on the list weren’t even in the library. But Hilburn and a group of librarians and teachers read every single one that was challenged. Ultimately, they kept the vast majority of the books, but got rid of a handful that she says frankly had little to no literary merit.

“Overall, we just decided, hey, maybe those shouldn’t have been there and not necessarily anything that I bought. But, you know, past librarians, had them in there,” she said.

A handful were given a content warning, so if specific students who aren’t allowed to check out 16-and-up books try to, they’ll be prevented from checking them out. There are only two such students at Bristow High.

“We’ve seen challenges for centuries to items in libraries,” said Cherity Pennington, President of the Oklahoma Library Association and longtime school librarian. “So that is nothing new. There is an uptick nationwide in challenges to reading materials in schools, both school libraries and classroom libraries. We are just seeing more of that.”

The uptick has gotten attention from both school boards and state legislators. Pennington said she’s troubled by some of the legislation, like a proposed measure to get rid of LGBTQ-themed books from the library and other moves to restrict student access to books around the state.

But in the end, she said, librarians are open to conversations about what’s in school libraries. It’s through those talks, whether with parents or school board members or state legislators that a better understanding will come.

“We want an educated Oklahoma,” Pennington said. “We want students being given appropriate resources. And we want our legislators to understand that school librarians are the experts in developing those collections.”