Oklahoma’s cafeterias have been hit hard by the coronavirus 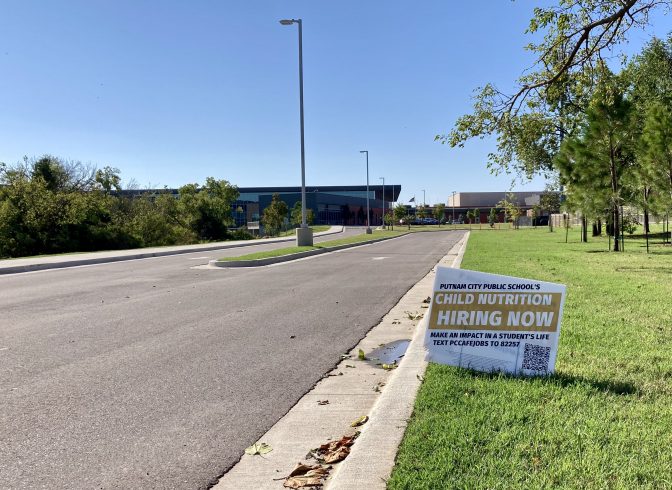 A help wanted sign greets parents picking up and dropping off their children at Capps Middle School in Warr Acres. Sodexo, the company that contracts out Putnam City Schools’ cafeteria services, says it’s down about 15 employees from full staffing.

Students are lining up to get nachos from Jackie Havenridge. Nachos are one of a few options students have got today. There’s a salad bar and pizza. But they are gravitating toward Havenridge.

“They love nachos,” she said with a laugh.

More than one option is actually a lot these days. Thanks to a national food shortage, child nutrition staff – like the one working here as part of the Putnam City School District – are scrambling to make sure trays are filled.

“It has been an interesting challenge,” said Jennifer Strong, district manager for the state of Oklahoma for Sodexo, a contract management company that provides school districts with their nutrition programs. “I’ve been in school food service now for over 20 years, and the last 18 months has been different than anything we’ve ever experienced.”

The pandemic has changed everything about lunchtime at Oklahoma schools. Strong says there was a massive statewide effort to feed kids when schools shut down in 2020. Now, there are issues with various options. In October, Edmond Public announced it would only serve one meal option each day at sites.

It’s been tough to serve some things like hamburgers at Putnam City Schools.

“Students are used to seeing them multiple times a week, potentially as one of their choices,” Strong said. “Now they may only see them, you know, once a week or every other week or even in the elementary schools, maybe once a month.”

On top of the shortage in food, Strong says, there’s a shortage in workers. A help wanted sign for cafeteria workers greets parents as they pick up and drop off their children at Capps.

Strong says Putnam City Schools is down 15 people at the moment.

But the district is hardly alone, said Jennifer Weber, Oklahoma’s State Department of Education Executive Director of Child Nutrition. She works with practically every lunchroom administrator in the state.

“Staffing is what we’re hearing is their biggest challenge,” she said.

Like many food service jobs, there’s a shortage of workers. Child nutrition might have appealing hours that coincide with a school day, but there are a lot of employers looking for staff right now. That means you’ll see administrators joining the food service line across the state.

In his rural district, he’s had limited and inconsistent options. So he’s switched up his menu strategy. School meals are a complicated affair at each school. There are numerous federal nutritional regulations that each district has to follow. And shortages in anything puts pressure on staff to constantly change their menus.

“Now it says the main item and it will say fresh fruit, vegetable and milk and Juice Daily, because we don’t always know what that is,” Price said.

Rural schools like Okmulgee have had similar problems to urban districts like Putnam City. So getting creative is critical for everyone to ensure kids are fed.

Students might notice fewer options. They probably have seen the help wanted sign out front. But Sodexo’s Strong says, they’re largely unaware of what’s going on. And she says, that’s the goal.