John Reinenger sits and waits for an unveiling ceremony of the new Bison logo at Oklahoma School for the Deaf in early October. 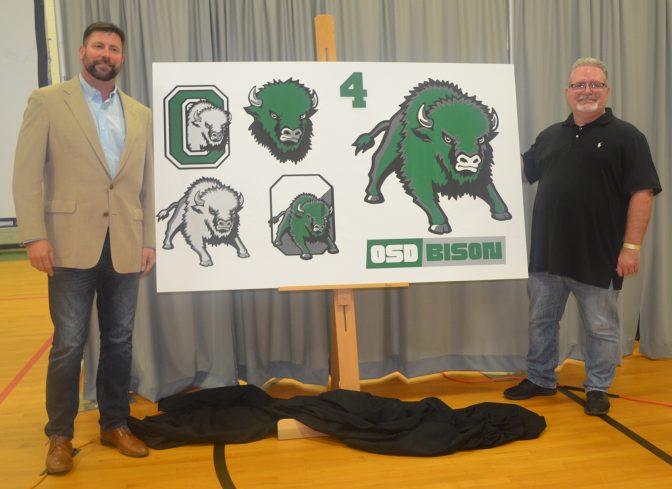 Oklahoma School for the Deaf superintendent Chris Dvorak (left) and Nathan Fylstra, the artist who designed the school’s new Bison logo, pose for a picture after its unveiling.

John Reininger flips through the pages of old newspaper clippings about Oklahoma School for the Deaf on a crisp October afternoon.

He points toward old classmates and friends and even finds a picture of himself with the rest of his basketball team.

“It brings back a lot of memories,” Reininger told StateImpact through an interpreter. “Definitely nostalgic. So yeah. I feel very, very closely connected to OSD. It’s like my second home, really.”

The Midwest City man’s children attend here. His parents met here. He is a 2000 graduate. But there was one thing his mother Sylvia told him not to do at school.

“My mother told me never to dress, like, in costume as an Indian, like any kind of Indian costumes,” he said.

He’s a citizen of the Muscogee Nation, but he never really gave it a lot of thought. When he was a student he even took pride in the mascot.

But as an adult, he shrugs and even cringes a little bit at some of the depictions of Native people at the school’s Betty Fine Museum. There are cartoonish images of a smiling Indian dribbling circles around Bugs Bunny and old pictures of white people dressed in Native regalia. It’s frankly stuff that he isn’t OK with now.

And he wasn’t alone. There’s been a community-wide realization here as well. The Indians mascot was officially retired this year and replaced with the Bison at a ceremony the same day as the school’s homecoming football game (Oklahoma School for the Deaf lost a nailbiter to New Mexico School for the Deaf 59-55).

Superintendent Chris Dvorak says last year as conversations about mascots swirled nationally, folks at the school wanted to get serious.

“It really kind of came to a head where there were some serious conversations within the administration that had links to alumni,” Dvorak said. “And we just got the sense that the time is now, you know, we really need to have a serious conversation. The writing is on the wall.” 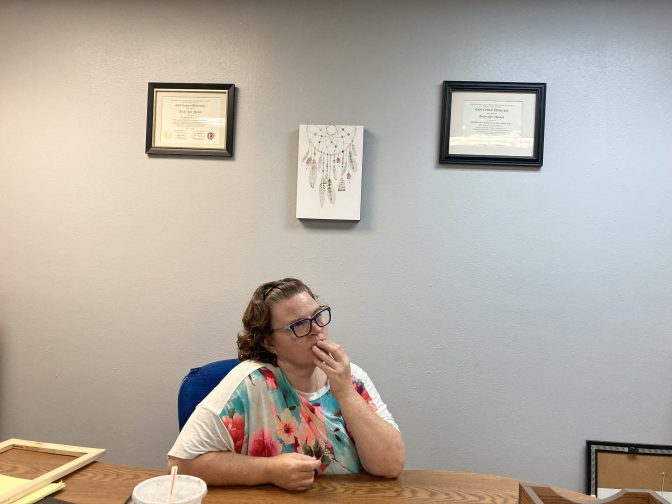 Trudy Mitchell in her office. Mitchell led the committee to change Oklahoma School for the Deaf’s mascot from Indians to Bison.

Changing a mascot isn’t an easy task. And it was gradual at Oklahoma School for the Deaf.

It started in 2016, when the school began removing imagery from logos and pivoting as much as possible to a block O with two feathers, but keeping the Indians nickname. The attitude at the time was to show greater respect to indigenous Oklahomans, Dvorak said.

The attitude then, he said was “let’s not make Indigenous people look like cartoons.”

So the school got rid of logos and artwork around the school featuring “caricature imagery,” he said.

But 2020 changed things further. And staff members who are also alumni actually approached Dvorak about making a more drastic change.

“A hearing person’s perspective dominates the world,” Dvorak said. “And it’s a constant struggle [for deaf and hard of hearing people] to navigate that world and then to also advocate for themselves. It’s always a fight.”

So the long fight to end Indegenous mascots resonated with some staff members. But he knew it would still be a difficult process. Dvorak said he wasn’t going to leave the leadership of it to just anybody. So he called on Trudy Mitchell.

Mitchell has a deep connection to the school too. She’s been involved with it since she was a 5-year-old, minus a stint at East Central University to get her bachelor’s degree.

“At first, the alumni were upset, they were angry, they didn’t want to change it,” Mitchell said. And after some explanation of the reasons of considering the change, the alumni started to understand the perspective in changing it and so we can move forward from there. And so then we started collaborating on ideas.”

Reininger’s own mother, who told him to avoid dressing up like an Indian at school, said she wasn’t a big fan of the change.

But Mitchell said, thanks to Reininger’s help and a willingness of the alumni to listen, they were willing to make the change. 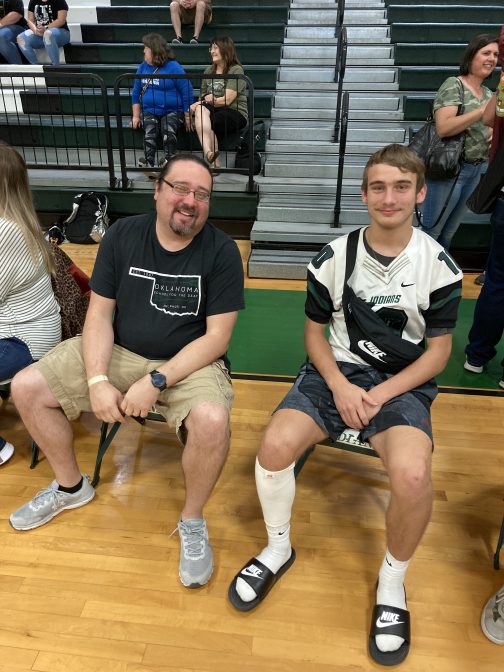 John Reininger, with his son Ryjan Reininger sit together before the start of a ceremony to reveal Oklahoma School for the Deaf’s new Bison logo.

In July, the Commission for Rehabilitation Services, which oversees OSD and serves as its board, unanimously voted to approve the change.

They had plenty of suggestions ranging from Tasmanian Devils, to T. Rexes, to Painted Horses to Eagles. But more than two-thirds ended up voting for Bison. The animal is native the area around Sulphur.

“I like it, I think it’s cool,” Reininger, who was a leader on the alumni renaming committee said. “People who are deaf rely on things like vibrations. Thinking about herds and movements and vibrations, I think it really connects well with the deaf community.”

The movement in changing names has gained momentum in western states recently. State laws in Washington and Colorado passed this year are compelling schools to stop using Indigenous peoples as mascots.

Such a bill has not been introduced in Oklahoma – the state with the highest proportion of Native Americans in the lower 48.

But Native Americans have been calling for an end to Indigenous themed mascots for decades. Oklahoma’s Five Tribes called on schools, “to eliminate the stereotypical use of American Indian names and images as mascots in sports and other events and to provide meaningful education about real American Indian people, current American Indian issues, and the rich variety of American Indian cultures in the U.S.,” 20 years ago. The National Congress of American Indians has led a yearslong campaign with an entire dedicated webpage to the movement.

“The chants from opposing teams and the slogans that kind of go are associated with the mascots and the imagery they can quickly get carried away,” Bunch said. “And they just don’t represent Native people well.”

He said the calls for mascot changes are important. He prefers to work with school districts who actually want to listen.

“Certainly, Cherokee Nation nor other tribal nations are out twisting anybody’s arm, telling them that they ought to change their mascots,” Bunch said. “But when we are asked we are certainly happy to participate.”

Tulsa Union recently announced it would change its nickname to either Redhawks or Bison based on a student vote. Tulsa Public Schools is in the early stages of looking at other mascots at its schools as well.

Will Oklahoma School for the Deaf’s decision help spark a change in Oklahoma? It’s difficult to say. A StateImpact review of mascots in Oklahoma districts found almost 80 still use mascots and nicknames that evoke Indigenous imagery..

“We don’t want them to be ashamed for any reason to just be the people that they are,” Bunch said. “And you know, it would be a shame if they do have these negative feelings simply because of how mascots are portrayed.” 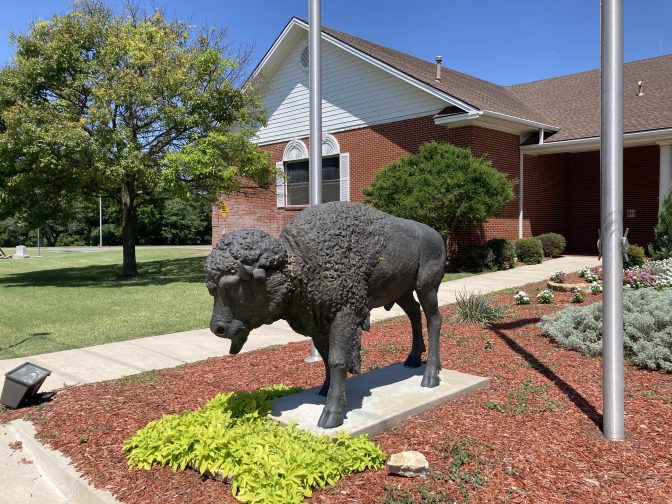 A Bison statue outside Sulphur City Hall. Oklahoma School for the Deaf has been located in the south central Oklahoma city since 1908.