The U.S. Department of Health and Human Services tracks each state's bed capacity and usage. Hospital and ICU bed use are fluid, and the data isn't updated in real time. The table is a snapshot of a point in time.

Four of the state's major hospital systems pledged to share their own ICU capacity data.

Oklahoma health officials are choosing to keep hospital capacity data under wraps as some of the state’s major health systems announce they have zero ICU beds open.

The Oklahoma State Department of Health held a COVID-19 briefing Thursday, where officials fielded several questions about current hospital and ICU capacity. They provided figures on current COVID-19 hospitalizations and ICU admissions, but didn’t disclose any data showing the number of open beds statewide. Statewide bed vacancies can shift minute by minute, dropping with every new admission and rising with each discharge.

Less than a day after that briefing, four of the state’s major hospital systems — which began coordinated communications and press events weeks ago — issued a release stating they would begin releasing their own ICU bed capacity figures “in an effort to provide transparency.”

Commissioner of Health Lance Frye demurred on questions about the number of open beds on Thursday.

“It’s a very difficult thing to really have a good grasp on,” he said.

During earlier waves in the pandemic, the department’s daily reports included those exact figures. On a given day, the reports would disclose the number of ICU and hospital beds in use, the number empty, and the percentage of beds that remain empty. For example, in one report, about 70 of the state’s roughly 1,000 staffed ICU beds were open — amounting to 7 percent of the state’s ICU beds. The last report containing that information came May 4, during the post-vaccine lull in cases and hospitalizations. 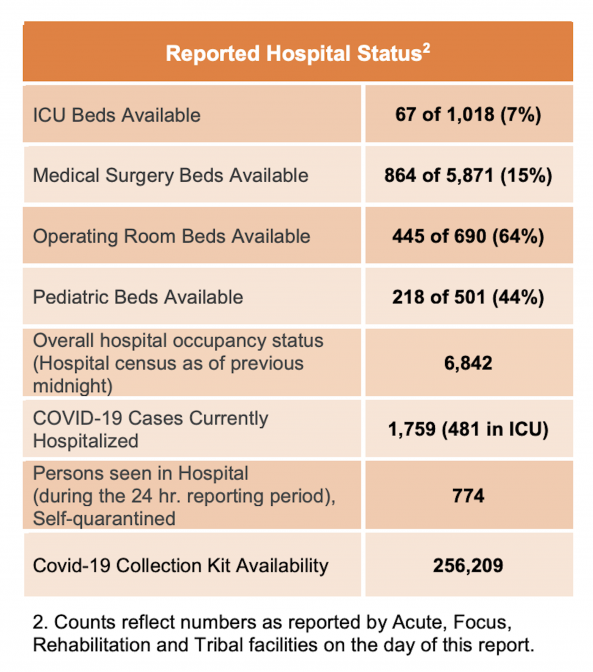 When Gov. Kevin Stitt implemented an executive order declaring a health emergency, Oklahoma began requiring hospitals to report bed capacity data daily. That information would then been disseminated in the State Department of Health’s daily reports to the public. This one is from December 2020.

Health officials, hospital administrators and others at the time often reminded the public those figures are fluid. A once common phrase, “a bed is not a bed,” highlighted that the presence of a physical bed isn’t all that’s required to fill it. A patient can’t be offered a bed without a nurse, doctor and support staff there to treat them. The advice was always to take the numbers with a grain of salt.

Frye said during the Thursday briefing that Oklahoma health officials used to track those numbers themselves, but they stopped once the U.S. Department of Health and Human Services began collecting the data.

“At some point during the pandemic, we switched from our mandatory reporting that we were doing in the state to, when HHS came out and said that they were going to require mandatory reporting,” he said. “We didn’t initially, but there was so much burden on the hospital system anyway that having them double report was really not — it just wasn’t a good thing for them. They said they had bigger, better things to take care of than trying to fill out two separate reports every day with the same information.” 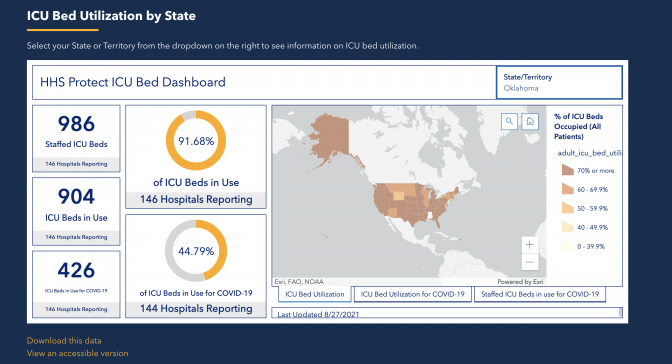 The U.S. Department of Health and Human Services tracks each state’s bed capacity and usage. Hospital and ICU bed use are fluid, and the data isn’t updated in real time. The table is a snapshot of a point in time.

During the earlier part of the pandemic, Oklahoma was under a public health emergency order. That came with state-level data reporting requirements, said Oklahoma Hospital Association President Patti Davis. Many of the figures required by the state were duplicated by the HHS requirements.

“It is essentially the same information,” she said.

She said it did provide some relief to the hospitals for the state to begin using HHS data.

When asked why the department opts out of including the HHS capacity data in daily reports, the agency offered the following statement attributed to Deputy Commissioner of Health Keith Reed:

“The HHS number fluctuates considerably from day to day based on the available staff for that particular day. It serves a valuable purpose in identifying the issue of the day, but does not always accurately reflect possible capacity in the state. In addition, the HHS data that is publicly available is the entire state, including Focus Facilities, Tribal and Rehab, so they are including facilities that the state has limited jurisdiction over and/or facilities that are not typically used to treat acute illness.”

More than 900 of the state’s 984 ICU beds were in use on Friday, according to the HHS dashboard.

The four health systems issued their joint release Friday afternoon. OU Health, SSM Health St. Anthony, INTEGRIS Health and Mercy all reported that they have no ICU beds. They also announced they would be offering these figures and other data independently every Monday, Wednesday and and Friday.