About every other person in Oklahoma can't get dental insurance. Nonprofits scramble to fill in the gaps, caring for people who come in with broken teeth, painful abscesses and worse.

Dr. David Jones said that working on a MobileSmiles unit, he’s seen it all.

“Most of these people haven’t seen a dentist in years,” he said. “And I mean, sometimes 20 years, 30 years. You’re going to see everything. You’re going to see all kinds of pathology. Of course, the lady I saw this morning, all the teeth are broken off the gum line, every one of them.” 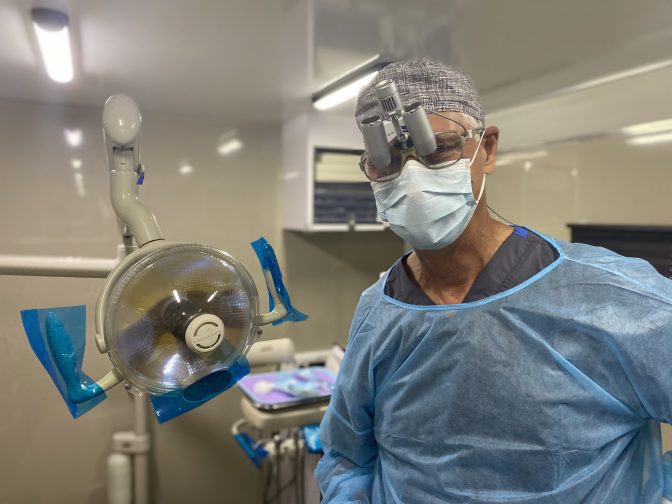 Dr. David Jones is one of many dentists who provide services on the Oklahoma Dental Foundation’s MobileSmiles unit.

For so many Oklahomans, these MobileSmiles trucks are the only way to get dental care. The Oklahoma Dental Foundation runs the program, as well as an annual massive dental event called Mission of Mercy. The foundation’s executive director, John Wilguess, said that nonprofits like this one have their work cut out for them.

“More than 50-percent of Oklahomans don’t have access to dental insurance,” he said.

The Oklahoma Dental Foundation’s dentists and hygienists get a first-hand look at Oklahoma’s severe lack of care.

“We’ll go down there with our mobile program and we will hear from — usually it’s ladies, almost 100 percent ladies, and they’re older — and they will say, ‘Boy, I wish I’d known you were coming,'” he said. “‘I took a bottle of whiskey and suppliers and pulled out this tooth and that tooth.’ I’m not kidding. I’m not exaggerating.”

Up until this year, that half of the population with no way to get to the dentist included adults on Medicaid. SoonerCare covered extractions, but the legislature hadn’t funded preventative services — like cleanings, fillings and dentures — in decades.

That’s changing. The Legislature decided to take up the federal government’s long-standing offer to cover such services. Karen Luce, the director of dental services at Oklahoma Health Care Authority, says it’s been a long time coming.

“Every year, we, we put out a budget and let them know the cost, and it is really determined by the Legislature whether or not they’ll fund the budget for it,” she said. “So I can’t say that we’ve done anything different. I think it just has a lot to do with political climate. And people are starting to realize the benefit of dental benefits and how much it impacts everything from livelihood, your overall health, your impact, everything that a person does.”

The political shift is obvious, especially after Medicaid expansion. Under former Governor Mary Fallin, Oklahoma spent a decade refusing Medicaid expansion. During tough budget years in 2017 and 2018, cuts to Medicaid funding were rampant. Then, in 2020, voters placed the expansion mandate in the constitution. When Governor Kevin Stitt kicked off the legislative session in February, he said it’s time for the state to use that program to work on improving health outcomes.

Historically, getting dental benefits into the legislative spotlight has been tough, Wilguess said. Politicians just don’t seem to realize the importance dental health has on broader health outcomes.
“They think, typically, that the moneys are all going to go to help get people teeth whitening because that’s their experience,” he said. “That’s where they spend their time going to the to the dentist.”

Adding preventative dental benefits to adult Medicaid isn’t a panacea. Many providers don’t accept Medicaid. And many low-income workers whose employers do not offer dental coverage still earn too much to qualify for Medicaid. But supporters do say it’s a step in the right direction.