A discarded syringe is shown with litter before being removed by the San Francisco AIDS Foundation's Syringe Pickup Crew. (AP Photo/Lorin Eleni Gill)

‘It’s all about meeting people where they are:’ Oklahoma legalizes clean needle exchange programming

Lawmakers focused on the policy's public safety benefits to ensure its passage out of Oklahoma's conservative statehouse.

When a constituent first came came in to advocate for needle exchange programming, Oklahoma State Rep. Carol Bush wasn’t sure what to think. That didn’t sound like the kind of policy likely to succeed in Oklahoma’s deeply conservative statehouse.

There was a shift one summer day in 2019. Bush is an avid cyclist, and she was riding in a Tulsa park when she saw it.

“I found a pile of needles,” she said. “Just right there on the side of the trail. And then I met somebody for lunch at one of the places over on 61st and Yale, and I got out of my car … and there was a needle right there. I had on sandals.” 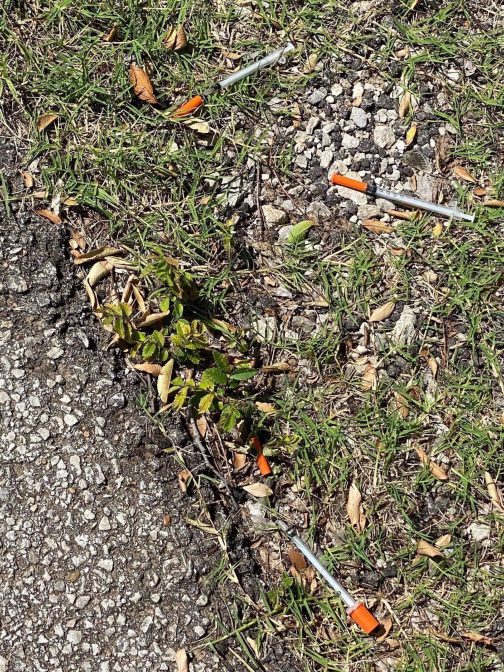 Oklahoma State Rep. Carol Bush was riding her bike in Tulsa, when she found a pile of needles just off the trail. She snapped this photo with her phone.

Bush has spent the past two years working to pass legislation that allows needle exchange programs in Oklahoma. Her bills didn’t create state-sponsored programs, but instead built a legal framework for them, so that community partners such as treatment centers or churches can create them.

The Oklahoma Legislature adopted the policy this year, when members passed Senate Bill 511. But it’s been a journey. On its face, it just sounds like something Oklahoma wouldn’t do.

But the need for clean syringe programming became impossible to ignore when she starting seeing dirty needles scattered around her district. And not just in the stereotypical places one might expect. When she saw the needle in the parking lot before lunch, she was in affluent south Tulsa — a visual reminder that the opioid epidemic and the resulting heroin use surge affect Oklahomans of all stripes. 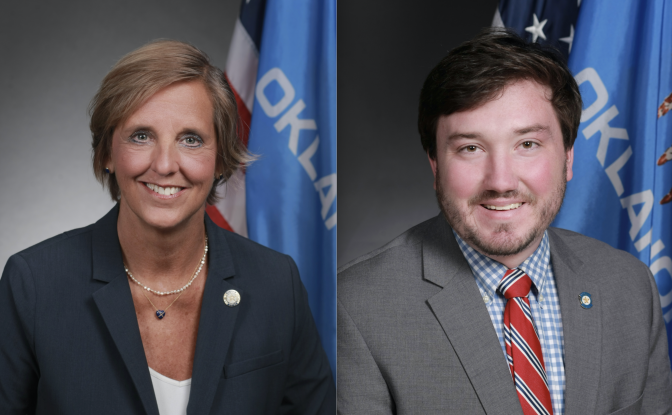 She and the Senate author, John Michael Montgomery — both Republicans — had to figure out how to get the state’s conservative-dominated Legislature on board.

“Do we go through this looking at this as a public health issue or public safety issue?” she said. “We decided was it was probably going to be more palatable to do this as public safety, as opposed to public health, just given the nature of how public health runs at the Capitol.”

The lawmakers also worked with the Healthy Minds Policy Initiative, a data-driven non-partisan think tank that focuses on mental health in Oklahoma.

“The reality is one in three officers will experience a dirty needlestick injury in the course of their career, and actually 25% experience more than one,” said the initiative’s executive director, Zack Stoycoff. “And what we’ve known from these types of programs in other states is that instances of law enforcement getting stuck by dirty needles can decrease by as much as 66% just having these syringe programs available in communities. So it really became a pro-law enforcement, pro-first responder bill  as much as it was a mental health bill.”

The lawmakers also focused their message on Republican states that adopted similar policies. That included Indiana, under then-Gov. Mike Pence. That definitely came up in committee.

The bills passed in April with far from unanimous approval. About a quarter of the House voted no, and so did about a third of the Senate. But it got through.

“Really, what we’ve been doing in Oklahoma for so many years is missing an opportunity to connect people who are living with addiction to treatment,” Stoycoff said. “And that’s what we need to do. We know that treatment is effective.”

The programs do link people with opportunities for treatment, but they also provide other benefits. Needle exchange programs are a form of what’s called “harm reduction.” Antonbara Sowemimo is the prevention programs manager and viral Hepatitis prevention coordinator for the Oklahoma State Department of Health’s sexual health and harm reduction services.

“It’s all about meeting people where they are,” she said. “So they meet someone and the person is not quite ready to stop injecting — that’s fine. Here are ways that you can inject safely. Here are ways that you can prevent whomever you inject with from getting or spreading any infectious disease. Here is naloxone to prevent overdose. You need frequent testing for HIV, Hep C. We’re here! We’re going to test you. It’s just a space where we can improve the quality of life for people.”

The State Department of Health won’t run its own exchange programs, but it will be involved. The legislation requires its officials to create the policy framework for exchange programs, to regulate them and collect data on their outcomes.

Stoycoff said that this king of programming has become even more critical since Bush first starting advocating for it.

“We’re seeing the impacts of COVID have really been on the drug addiction side,” he said. “As a financial downturn for families kicks in as, stress about just life situations, as loss of social connections kick in you, the rate of Oklahomans feeling like they have to self-medicate because they don’t have access to care — it’s really a concern. It is probably the concern right now we’re seeing in the data.”