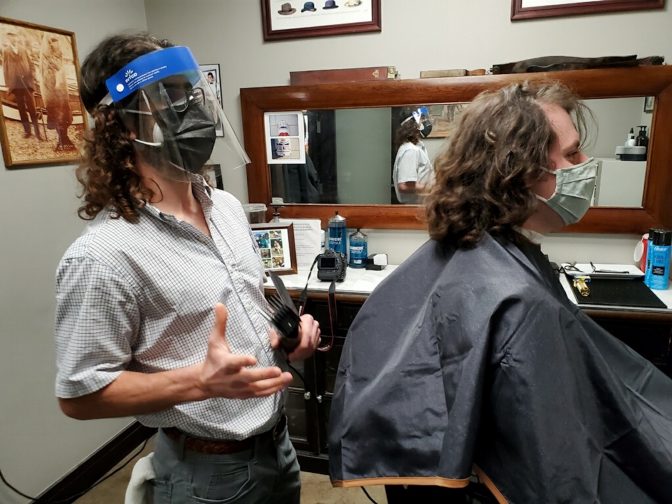 It had been well over a year since I’d gotten a trim. And it showed.

My hair was the longest it had ever been in my life. Normally, when it goes over my ears that’s the sign I use to visit a barber. But because of COVID-19 and health professionals urging me to stay home as much as possible, I didn’t get it cut. It grew, grew, grew in the interim.

By April 2021, it was down to my shoulders. But getting vaccinated meant it was time for a cut.

So at the recommendation of a Cordell Santa Claus who relies on having a good barber, I went to visit Chuck Naifeh at Carwin’s Shave Shop in Nichols Hills.

Naifeh said I’m hardly the only person to avoid getting a haircut. I knew this. I have plenty of family members – including a distant cousin who is a Catholic priest – who have forgone a buzz because of the risks of the coronavirus.

But business is finally picking up again.

Naifeh said precautions will continue while he’s giving haircuts. During our cut, he wore two masks and a face shield and I kept my mask on. Additionally, sanitization, which was always a priority, has been kicked into overdrive during the pandemic, Naifeh said.

After every haircut, he sprays down his whole barbering room with viricide.

Naifeh is the consummate professional. I know I want to get my hair chopped off, but I asked him for styling advice.

“If you weren’t going to leave it long, I think we should go back and bring you back, bring you back to your old self,” he said. “I mean I guess that’s part of getting back to the new normal. We can start to start to get back to what we used to look like at least.”

The new normal is ill-defined for Naifeh.

From the moment he was forced to close down, he’s had to weigh client safety with his personal well-being. And even though it felt risky in the beginning, he knew he had to open up the shop.

“We were in a financial bind that we had to continue offering services, even if we felt they were unsafe for me as a barber, even though I was sure that I was keeping everything as safe as possible for the client,” Naifeh said.

Now that he’s in the swing of things, it feels much safer, Naifeh said.

But there’s been a great personal cost to his family because of the pandemic. His father – attorney Bob Naifeh – died at the age of 62 in March 2020.

Bob Naifeh was one of the very first patients in the state, and the first COVID-19 case admitted to Mercy Hospital in North Oklahoma City.

His father went on a ventilator for 15 days and never woke up. It was heartbreaking for the Naifeh family.

And what he’s seen since from other Oklahomans has been maddening.

“It’s been frustrating to know that, you know, not much could have been done to help my dad,” Naifeh said. “[He] got the best care that was available at the time, but that he died in a way that so many others didn’t have to go through. And I think that the most frustrating part of this year is that all of the fighting of the clear solutions to this problem.”

Naifeh isn’t totally sure how to move forward.

He feels safe at work, but participating in other parts of life are still intimidating, he said. 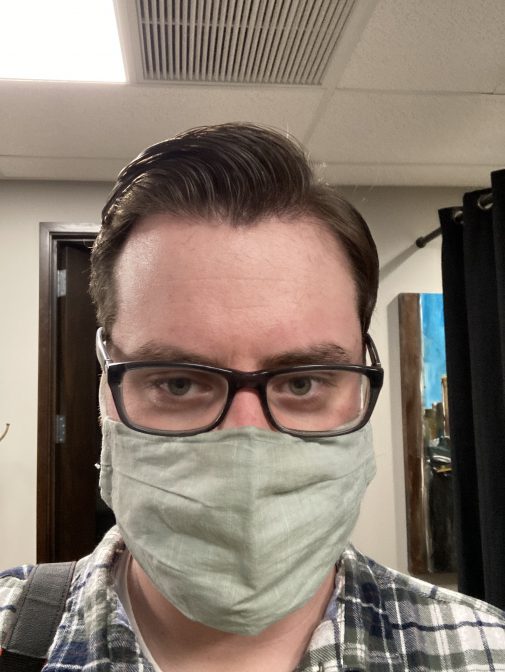 StateImpact Robby Korth after a haircut at Carwin’s Shave Shop in Oklahoma City.

“I’m not ready,” he said. “I now have both vaccines. And I think that COVID has been kind of just a part of this veil being lifted on what our neighbors and family and friends  have reacted to this has really shown us a side of our culture that has been frustrating.”

A conversation with Naifeh felt like a chat with an old friend. Barbers are supposed to shy away from tough issues, he said. It was one of the first things he learned in barber school.

But I was grateful for an opportunity to talk about present day issues and listen to his thoughts on them.

Plus I was happy with the haircut. I looked a lot like I did pre-pandemic. Maybe even better?

It got the stamp of approval from my wife.