Senate President Pro Tempore Greg Treat, R-Oklahoma City, speaks during a news conference at the state Capitol, Monday, May 4, 2020, in Oklahoma City. Treat is one of the Legislature's most vocal abortion opponents. (AP Photo/Sue Ogrocki)

The proposed restriction policies don’t vary much, but they could have a better shot at implementation because of shifts on the U.S. and Oklahoma supreme courts.

This story was produced in partnership with The Frontier‘s Kassie McClung.

Legislators have sponsored more than a dozen abortion bills for the 2021 session. Members introduced a bill that would ban abortion after a doctor can detect a fetal heartbeat — usually around six weeks, when many women don’t yet know they’re pregnant. Another bill would restrict which doctors can perform the procedure.

One “trigger bill” would automatically ban abortion in the state if the U.S. Supreme Court overturned or altered Roe. v. Wade, the 1973 landmark opinion that established a woman’s right to have an abortion. On Jan. 21 — one day before Roe v. Wade’s 48th anniversary —Senate President Pro Tem Greg Treat, R-Oklahoma City, filed the measure.

The shift in the U.S. Supreme Court didn’t prompt the introduction of the anti-abortion bills, but it did ignite more optimism among Oklahoma lawmakers, Treat said.

“Obviously, there are some of us that have more hope going into it, but it has not driven us filing these bills or pursuing these policies,” Treat said during a media availability last week. “This is just what we have done for a very long time.”

Under the Trump Administration, the U.S. Supreme Court shifted to a conservative majority. Republican officials and anti-abortion rights groups have long pushed for a conservative court as a means to effectively overturn Roe v. Wade and restrict access to abortion in Oklahoma. Constitutional challenges to state-level abortion bills — such as the ones Oklahoma is considering — could work their way to the nation’s highest court, creating an opportunity for the court to change course on Roe v. Wade. 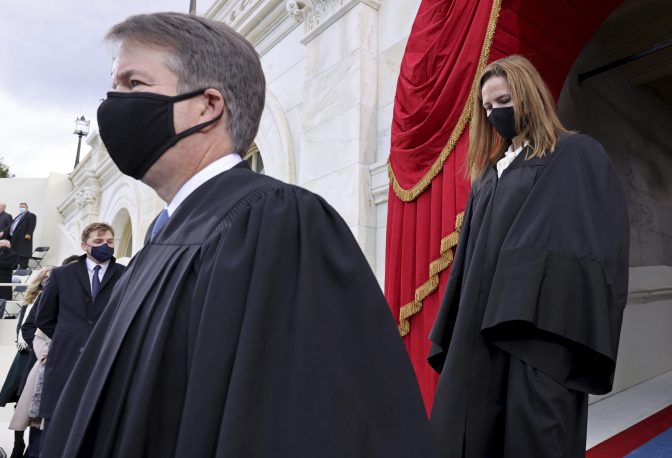 Similarly, justices appointed by Democratic governors held a majority on the Oklahoma Supreme Court for decades. Throughout that time, the Court has consistently overturned the Legislature’s abortion restriction bills.

However, with Justice Tom Colbert’s retirement announced in early 2021, the makeup of that court is shifting as well. Gov. Kevin Stitt has started the Supreme Court appointment process and is awaiting recommendations from the Judicial Nominating Commission, according to a spokesman for the office.

Another justice is expected to retire in the near future. That could be the break Republicans need to take their first majority of the state Supreme Court, said Connor Alford, a political science instructor at Southeastern Oklahoma State University

“It will depend on who they select, but it is an opportunity to basically go from an era in our state’s history where the left had complete control over the court, to a point where the right now has a genuine opportunity in the next few years to change that drastically,” Alford said.

Although a conservative U.S. Supreme Court could be more favorable to anti-abortion legislation, Alford said to take that with a grain of salt. Federal Republican judicial nominees have held majorities for long stretches since Roe v. Wade, but they haven’t overturned it. In fact, they were instrumental in the case.

“Actually, six of the seven justices who voted for abortion were Republican appointees,” Alford said of Roe v. Wade.

The committee, in its first hearing since the pandemic started, heard six anti-abortion bills, which accounted for a third of the bils considered that day. Committee members passed five of the abortion bills, but unanimously rejected one that would classify abortion as homicide. That measure would have punished not only physicians performing abortions, but also patients who undergo the procedure.

Abortion rights advocates say the proposed bills are meant to scare women out of accessing abortion or make them believe they cannot access it. The shift in the U.S. Supreme Court has emboldened state lawmakers to advocate for abortion bans at a “really quick pace,” said Gloria Pedro, Planned Parenthood Great Plains Votes’ regional manager of public policy and organizing for Arkansas and Oklahoma.

“We are seeing these fights play out in states all across the nation, so yes, it’s happening in Oklahoma, and it’s super crazy but it’s also not an isolated incident,” Pedro said. “So that just lets us know the time to keep the pressure on is now.”

In Oklahoma, which has some of the strictest regulations on abortion in the U.S., women must first receive a sonogram and wait at least 72 hours before the procedure. Most abortions in Oklahoma are banned after 20 weeks.

There were four clinics in Oklahoma performing abortions in 2017, and only three of the state’s counties had a clinic, according data from the Guttmacher Institute, a national research and policy organization that supports abortion rights.

At a committee hearing on Feb. 24, Todd Russ, R-Cordell, who authored the “heartbeat bill,” said the legislation would put Oklahoma in a better position to restrict abortion. Rep. John Waldron, D-Tulsa, asked Russ if the measure could undermine Roe v. Wade and noted his concern that women might be unaware they’re pregnant so early. 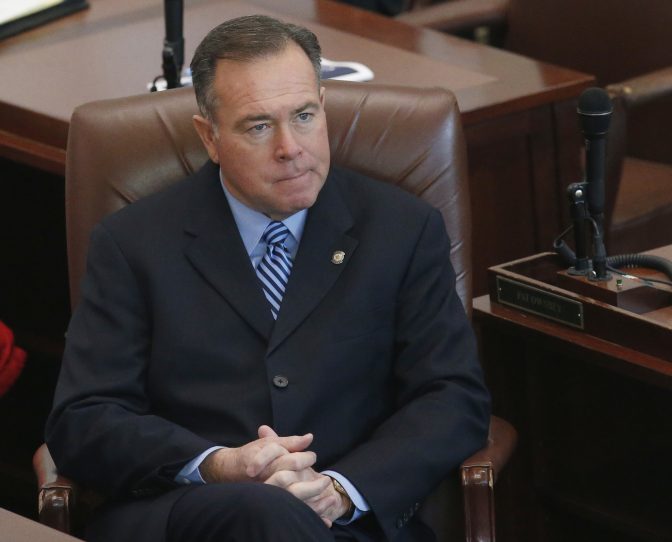 The bill also contains language that would require physicians to provide those seeking medication-induced abortions information about reversing the medication’s effects — information that critics say is misleading, unscientific and potentially dangerous.

One proposed law would prohibit Planned Parenthood from receiving any public funds.

Another bill aims to limit who can perform abortions, requiring that the procedure only be performed by medical doctors who are board certified in obstretics and gynecology.

That measure was one of the first abortion bills to make it to a full floor hearing. The House considered it this week, and debated it for over an hour. Supporters heralded the measure as a way to protect women who undergo abortions, referring to the procedure as morally incorrigible throughout.

Lawmakers opposed to the measure have said it would reduce access to the procedure and questioned its constitutionality. Rep. Cynthia Roe, R-Lindsay, one of the bill’s authors, said similar bills have survived court challenges in other states.

South Carolina has such a law in effect, but similar measures in Arkansas and Louisiana have been paused pending court challenges.

“If we can save one life with this legislation then we’ve done our job,” Roe said on Tuesday.

Minority Leader Emily Virgin, D-Norman, said if lawmakers want to improve women’s health, they should place their resources in other areas, such as providing comprehensive sex education and expanding access to paid family medical leave.

“If you truly want to decrease the number of abortions that take place in this state there are proven strategies to do so. But time and again this body fails to take those policies up,” Virgin said on Tuesday.