The companies will usher in managed care and partially privatize Oklahoma’s Medicaid program, SoonerCare. That will include the portions under the recently passed Medicaid expansion.

This story was written in collaboration with The Frontier’s Kassie McClung.

State officials announced the winners of up to $2.1 billion in health care contracts on Friday, a major milestone in implementing Oklahoma’s hotly debated privatized Medicaid program.

Gov. Kevin Stitt has made partially privatizing Medicaid one of his administration’s top priorities. Using a policy called the managed care model, Oklahoma will begin paying private health insurance companies to coordinate much of the state’s Medicaid program, known as SoonerCare. Up to 75 percent of the state’s Medicaid enrollees will work with the private companies. That includes the anticipated 200,000 working adults who will newly qualify for Medicaid after voters passed expansion last year.

Oklahoma has some of the worst health outcomes in the country, Stitt said during a news conference at the state Capitol on Friday. The state’s current approach to health isn’t working, he said, and it’s time to try something new.

“Business as usual will not make us a Top 10 state,” he said.

The program, which will be called SoonerSelect, has proven highly controversial.

Supporters, including officials within the Oklahoma Health Care Authority, argue that the policy protects the state from financial risk. For example, when demand for services increases because of a pandemic or a financial downturn, the onus would be on the private companies to adjust to new costs, removing the burden from state coffers. It would also place a new incentive on preventative care. That could improve the state’s health outcomes, which rank 46th nationally.

Opponents are concerned the program was designed hastily, that it will reduce health access for low-income Oklahomans instead of improving it, that it will drive down provider participation in Medicaid, that the $2.2 billion contracts faced no legislative oversight, and that Oklahoma’s past attempts to implement full managed care failed miserably. Most of the state’s medical trade associations and many top-ranking legislators have publicly criticized it.

The contracts will be valid for one year with the possibility of year-long extensions at the health care authority’s discretion. Enrollment into the programs will be effective Oct. 1. Seven companies went through the bidding process, which opened in mid-October and closed Dec. 15. The 400-page request for proposals for SoonerSelect asked companies to provide a substantial amount of information, including its experience working in Oklahoma, staffing and implementation plans.

Managed care changes how Medicaid funding works. Right now, the Oklahoma Health Care Authority manages SoonerCare and pays providers directly, using a fee-for-service model. That means the state pays doctors, hospitals, nursing homes and others a uniform rate for their services. For example, regardless of where they are in the state, physicians who accept SoonerCare will get paid the same amount to treat an ear infection.

Under managed care, the Oklahoma Health Care Authority will pay private companies to coordinate enrollees’ care, and those companies will be responsible for paying providers like doctors and hospitals. Instead of paying standard rates to providers, the state will pay the company a sum of money per enrollee. The company will determine the best way to use that funding for the enrollees’ health needs. 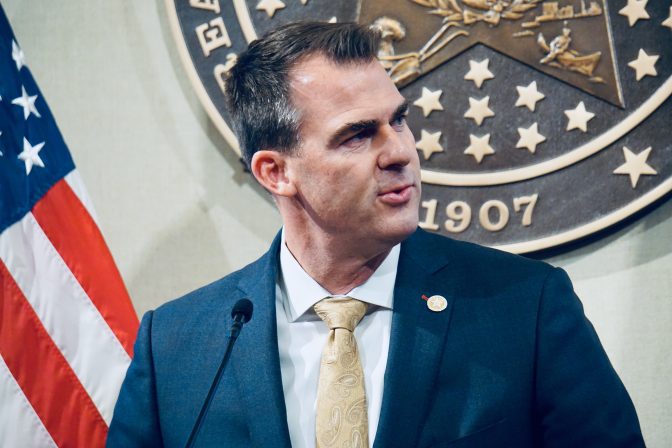 Gov. Kevin Stitt said during the Jan. 29 press conference that Oklahoma needs to improve its health outcomes, which now rank 46th in the nation. Photo by Ben Felder, The Frontier.

Several of Oklahoma’s top health care organizations have come out to oppose the managed care plan.

Three physicians groups — the Oklahoma State Medical Association, Oklahoma Osteopathic Association and the state’s chapter of the American Academy of Pediatrics — released a scathing joint statement on Friday afternoon, criticizing the move. Although there’s room to improve the state’s Medicaid program, handing over control to for-profit companies is ill-advised, the statement said.

“It is unfortunate that, rather than working with stakeholders and legislators on his managed care scheme, this administration has chosen to push through an ill-conceived plan that will have serious implications for our state’s most vulnerable and at-risk populations,” Stillwater
physician Woody Jenkins is quoted in the release. “Real leadership involves more than buzzwords and partisan talking points. It requires dialogue and compromise, two things that have been sorely lacking during this process.”

The Oklahoma Hospital Association criticized, among other things, the timing of the program.

“We are disappointed in the governor’s decision to award these contracts that will do nothing to
improve the health of Oklahomans and will increase costs to the state,” the statement reads in part. “The middle of a public health crisis is not the time to be sending Oklahoma health care dollars to insurance companies to manage the care of Oklahomans.”

The announcement of the contracts came just days before the state legislative session, which begins Monday. Although the Legislature appropriates funding to the Oklahoma Health Care Authority, it doesn’t get to control many specific funding decisions within the agency.

The proposal has drawn blowback from many Oklahoma lawmakers on both sides of the aisle. In December, dozens of House Republicans issued a joint press release, expressing fears that the program would “be a disaster,” and concern that the agency might “try to act before the legislative session begins Feb. 1.”

“This may be the biggest contract ever contemplated by the state of Oklahoma, and we’re going to do that without legislative approval,” he said in an interview. “That defies all logic, in my opinion.”

During an Oklahoma Health Care Authority budget hearing before the Senate Health and Human Services committee on Jan. 25, chairman Greg McCortney raised concerns about bringing in costly private companies for work the agency could do in house.

“I think every one of us believes you could do this better,” he said.

Sen. Kim David, a longtime proponent of managed care, said she had no concerns that the Legislature and critics within it could block the program. She said the state question that placed Medicaid expansion in the constitution guaranteed it.

“Constitutionally, we have to fund the expansion population, so there is no doubt that we will absolutely fund this,” she said during Friday’s news conference.

She said that critics in the Legislature simply don’t understand the policy, or that they’re looking out for special interests that benefit under the status quo.

“I think a lot of a lot of members — some of those who have been outspoken about it — don’t understand exactly what the concept is,” she said. “They know what they’ve been told and they know they should be afraid. And then I have several who stand to gain by keeping the system the way it is.”

Asked whether introducing profit motives into Medicaid would hamper access or quality, Corbett said no.

“I think the reality is maybe the only organization in the health care system today that’s a not-for-profit, in the real sense of the word, is us (the Health Care Authority),” he said. “Most of our providers are in the business for profit or for surplus creation and things of that nature. What we’re looking for from our partners is the ability for them to make investments, bring innovation and really make a difference in what we need to be doing.”

At least 40 states have implemented some form of managed care, but many use it only for limited populations. Not all managed care programs use what is called fully capitated care, in which there is a hard cap on the amount of money per enrollee the state pre-pays the companies. SoonerSelect is fully capitated.

Oklahoma voters approved Medicaid expansion in June. That policy was created under the Affordable Care Act in 2009. When states choose to expand Medicaid, they change the program’s eligibility requirements to accept more working poor adults. Households with incomes at or below 138 percent of the federal poverty guideline will be eligible.

Medicaid expansion will make about 200,000 working Oklahomans eligible for the health program. State officials project Oklahoma’s share — one tenth of the total cost — to be about $160 million. Medicaid expansion goes into effect on July 1. 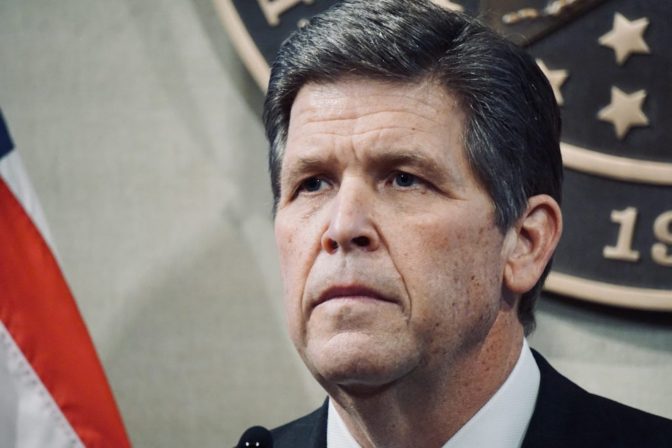 Secretary of Health Kevin Corbett also serves as the Oklahoma Health Care Authority CEO. He announced the four vendors during the press conference on Jan. 29. Photo by Ben Felder, The Frontier.

Corbett said the agency decided to go the managed care route after Medicaid expansion passed. That has meant creating this program from start to finish in about 7 months — a heavy load for the agency’s workers.

“They took the holidays and did all the work we needed to do,” he said.

This won’t be the state’s first foray into managed care. Oklahoma implemented a managed care program for urban residents in the late 1990s, which failed and was canceled in 2003.

The program, known as SoonerCare Plus, ran into several issues. The private companies contracting with the state demanded rate increases — one demanding an 18 percent increase year over year during a budget shortfall. When the state didn’t grant the increase, it dropped out of the program, like several others had in preceding years.

In 2002, Oklahoma Health Care Authority CEO Mike Forgary issued a letter to members, warning them that because of changes with their managed care organizations, they could soon see their care rationed or copays required.

“Our State is experiencing a revenue shortfall and OHCA must revise and balance its budget,” the letter reads in part. “As a result we have given the Health Plans greater leeway to control the cost of services that you receive.,. This will likely mean fewer services to you than you now receive… We very much regret that we have to take this action but the law requires it.”

The state canceled the program a year later, when too few companies were available to enrollees. A state-sponsored report on Medicaid policy later found that a different program that did not use fully capitated managed care, SoonerCare Choice, would be a better model.

“In 2003, OHCA developed an analysis that indicated OHCA could operate the Choice program in urban areas at approximately one-quarter of the administrative costs of the Plus program,” the report states in part.

“The concern now expressed by many providers is that we have been here before and that it was a disaster,” the editorial reads in part. “Indeed, this is very true…The justifiable outrage was intense.”

This go round will be different, he wrote.

“So, what is the difference now? In my opinion OHCA has gone to extraordinary lengths to ensure that the past is not repeated. There are a plethora of protections and safeguards built into the Request for Proposal (RFP) language that ensure the state’s providers will not be disadvantaged. For instance, the contractor will be held to a tight rein on how much they will be allowed for profit and overhead. So, too, the quality, patient and provider reactions will be closely monitored. As Chair of OHCA I am confident the mistakes of the past will not be repeated.”