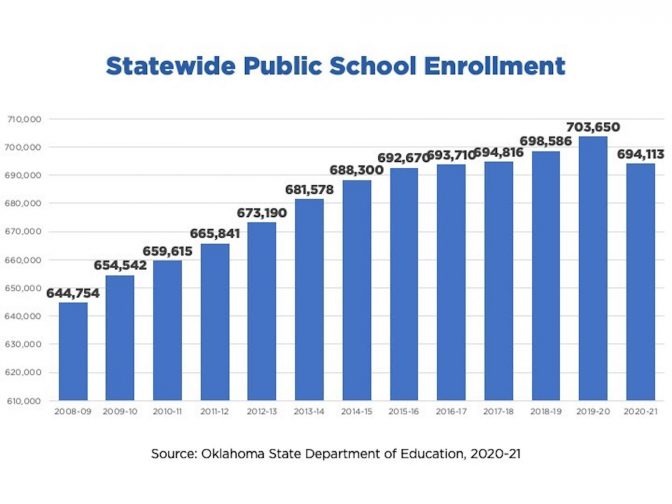 Public school enrollment in Oklahoma plummeted amid the coronavirus pandemic, according to October 1 enrollment data released Thursday by Oklahoma’s State Department of Education.

Public school enrollment shrunk by more than 9,000 students, the largest single year drop since at least the 1976-77 school year, the earliest year for which statewide enrollment data is available. It’s the first time enrollment has dropped overall in 19 years.

More than 400 of the state’s 538 districts shrank when compared to the previous year.

Much of the decrease can be attributed to fewer students enrolling in pre-kindergarten and kindergarten across the state.

More than 4,700 fewer students enrolled in a public pre-kindergarten program and the state’s schools lost more than 2,300 kindergarteners.

“This pandemic has presented a multitude of challenges, and lower early childhood enrollment numbers tell us we will need to heighten our focus on early learning opportunities and strategic interventions to ensure these children have the prerequisite skills needed for reading and math,” State Superintendent of Public Instruction Joy Hofmeister said in a written statement.”

More than three quarters of Oklahoma 4-year-olds take part in a pre-k program during the typical school year.

Click here to see a full list of school districts and how they shrank or grew via Oklahoma’s State Department of Education.