The Howe High School graduation wasn’t supposed to be at dusk in the shadow of Poteau’s Cavanal Mountain.

There weren’t supposed to be funnel cakes.

There weren’t supposed to be car horns.

But COVID-19 created a need for a different kind of graduation ceremony for the tiny Oklahoma town’s graduating class of 39. So, it was moved from the gymnasium to a nearby drive-in movie theater.

“The drive-in brings about a dynamic that nobody expected,” Howe Superintendent Scott Parks said. “They’re all getting funnel cakes and popcorn and there are soft drinks.”

Parks said that Howe will have some sort of celebration for its graduates at a later date when social distancing isn’t a necessity. But they had to have something now.

“Some folks can’t wait,” he said. “Seniors are going to go out and get jobs, going off to school. They may not be available at a later date.” 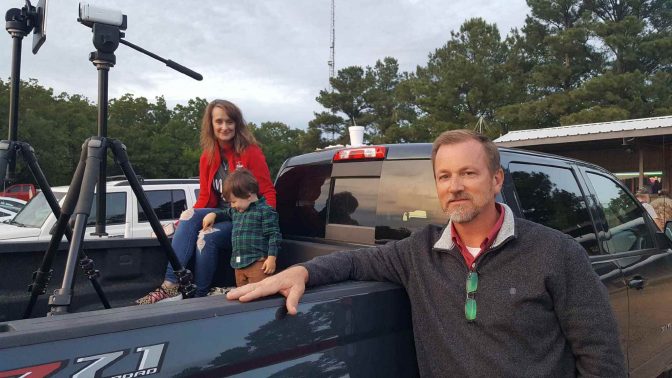 Howe Schools Superintendent Scott Parks (foreground) sits with Howe teacher and his wife Tammy Parks and their son Carson Parks, as they prepare for the start of Howe High School’s graduation. Tammy Parks recorded the ceremony on Facebook live.

The novel coronavirus has changed a lot of graduation plans throughout Oklahoma. Normally, a community’s staple spring event, the global pandemic has altered plans.

Districts across Oklahoma are taking a wide range of approaches to honor graduates. That includes ways outside the ceremonies.

Yard signs across the state are dotting green spaces. Downtowns are covered in banners. And online – where many students have been attending school since after spring break – is filled with thousands of tributes.

But nothing can substitute an actual graduation ceremony.

Smaller districts are finding creative ways like drive-in gatherings and car parades to celebrate graduates. Many suburban districts like Edmond and Moore are simply delaying their in-person events. While the state’s biggest district Oklahoma City is celebrating digitally like many others. Superintendent Sean McDaniel says schools will host virtual graduations in a video sent out to graduating seniors.

“It is not ideal,” he said in the message to graduates. “It’s not what we would hope for. But we want to make sure we can do everything we can to honor you.”

State Superintendent Joy Hofmeister said during a weekly call with school leaders across the state that graduation is an important cultural ceremony and schools should try to be creative to honor graduates.

“Any sort of virtual ceremony, drive-in ceremony, mobile parade where our social distancing is possible, it is allowable and encouraged,” she said on the call.

However, she cautioned district leaders to stay safe. And discouraged any in-person ceremonies before June 1.

School districts were technically able to allow in-person graduations with proper social distancing after May 15 as outlined by Governor Kevin Stitt’s plan to re-open.

Cache High School, 15 miles west of Lawton, is planning to host its graduation ceremony in its football stadium next week. Superintendent Chad Hance says the ceremony is too important to skip, and moving it past June first wasn’t practical.

“We owed it to our senior class to try to do something good for them,” he said.

Cache has put together an extensive plan designed to keep people properly distanced and safe. Hand sanitizing stations will be spread about the stadium. The crowd will sit two yards apart on the field while the 130 graduates are spread apart in the stands.

“The last thing we want is to be the reason why somebody gets sick,” Hance said. “And that’s something that weighs heavy on our mind. But, you know, we also kind of realized this is going to be around a long time so we’re going to have to make adjustments to just kind of live with it.”

The adjustments might seem extreme. But Hance said other school districts have reached out as they explore similar options moving forward. 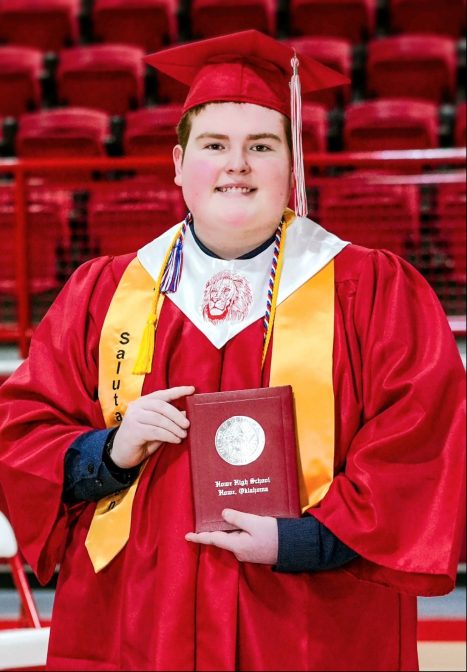 Every Oklahoma high school is in a tough place, trying to figure out to honor their senior students, he says.

Morris, the Howe salutatorian, said the scenario is upsetting. But it will make perfect storytelling material in the future.

“No one could have ever imagined their own graduation up on their local drive-in’s theater screen or livestreamed through Facebook,” he said. “But it will make a nice little story to tell our children or grandchildren decades from now.”