A Spanish flyer used by Oklahoma City Public Schools to advertise the beginning of distance learning in the district. 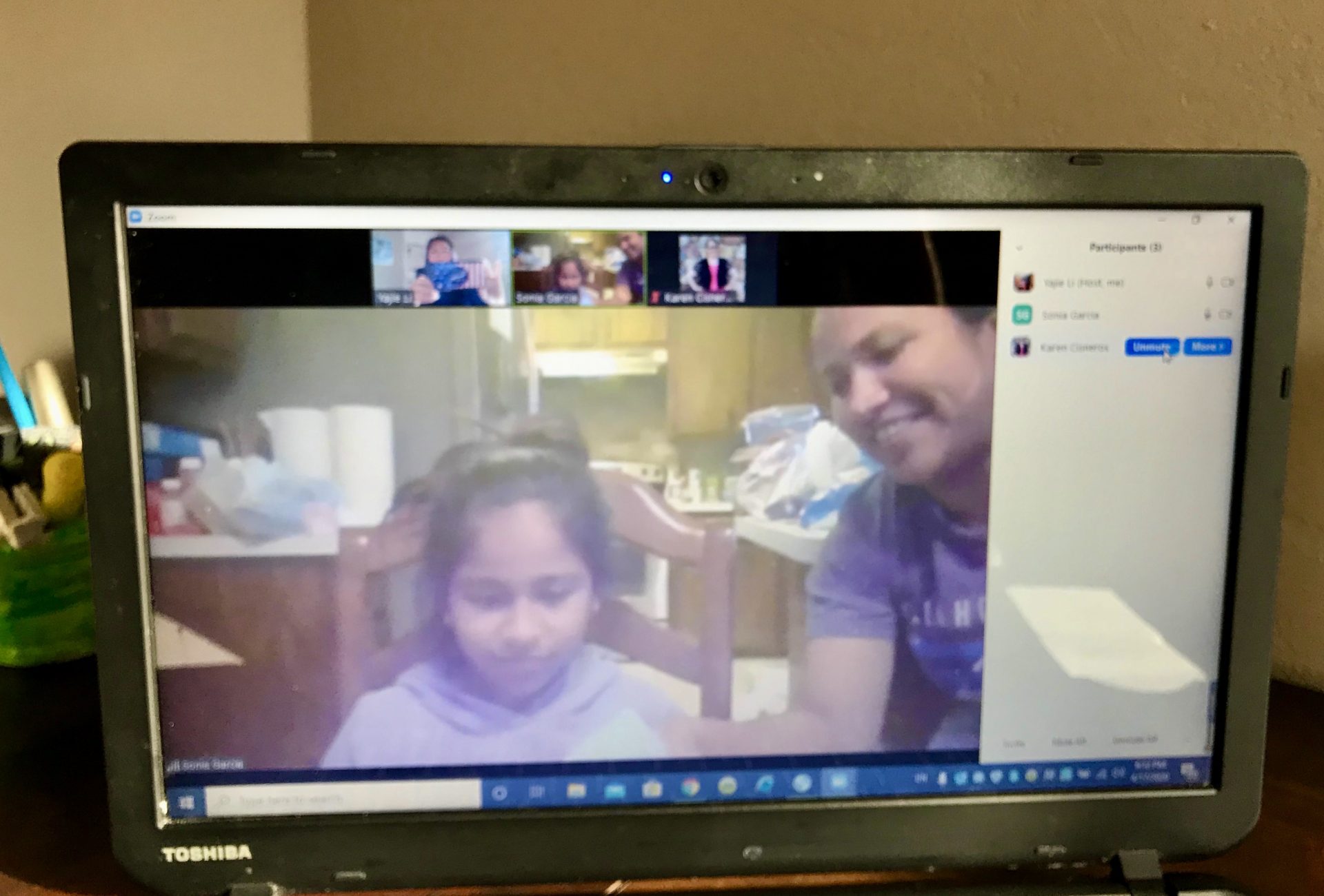 Moore English learner teacher Catherine Li works with one of her students over Zoom.

In Moore, students are getting messages in 30-plus languages other than English.

Moore Public Schools is using different methods from recorded phone messages to an application that translates text messages in real time to communicate with its English learners, — those students who live in homes where English isn’t the primary language spoken.

“It’s a task just trying to communicate with the multiple languages we have,” said Kristy Hernandez, Director of Public Services in Moore.

Reaching the approximately 60,000 English learner students in Oklahoma’s public schools is a challenge in the time of COVID-19. Oklahoma schools are shuttered in favor of distance learning

Districts are trying to reach them any way possible. After an initial period of taking care of their basic well-being, teachers are now trying to maintain English proficiency while building ability in other subjects.

It remains to be seen what the final result will be, Hernandez said

“Teachers are working as hard as they can to communicate, to provide resources and things to families,” Hernandez said. “But ultimately, it’s going to rely on what’s going on at home.”

What schools are doing

Moore is sending out paper packets to younger kids and working with the older ones via the internet where possible.

Hernandez said the district is leaning on community volunteers, like local woman Nu Ngo, to translate phone messages into languages spoken by students and their families, like Vietnamese.

Email hasn’t been effective for Moore teachers while trying to reach out to English learner parents.

The app – developed by the Gates Foundation – translates text messages in real time between teachers and students. And it has improved communication with families immensely, Hernandez said.

Moore’s larger neighbor to the north, Oklahoma City, is just trying to reach students any way it can. There are 65 languages spoken by that district’s more than 10,000 English learner students.

So far, the district has distributed at least 2,000 English learner packets.

One of those packets was picked up by Maria Guevara, mother of fifth grade English learner student Dulce Guevara.

In an interview through an interpreter, Maria Guevara said the quarantine has been difficult on her family. She has two older children who are in Oklahoma City Public Schools working on their education via computer, and an older son in college.

They’re all cooped up together. So schoolwork has been a welcome relief, she said.

“They don’t go out unless they absolutely have to,” interpreter Lorena Cardenas said. “But she is afraid.”

Christopher Berry, Director of Language and Cultural Services at OKCPS, said he recognizes that fear. 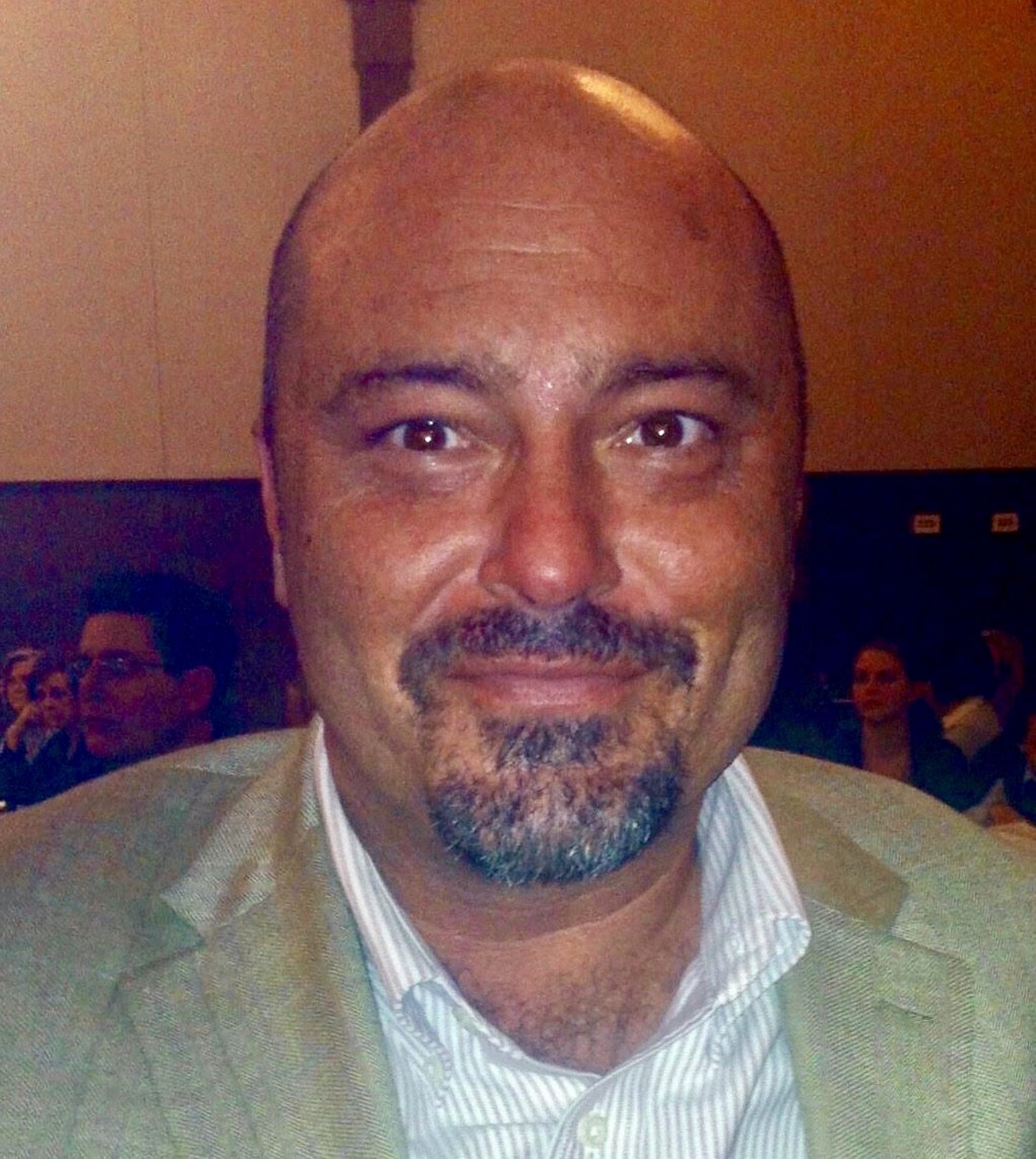 He said his goal is to provide some normalcy in children’s lives via education. That’s why with English learner students he said teachers are continuing to try to build growth in varied subjects like math and social studies.

“That’s what we always do and that’s what we’re going to continue to do regardless if it’s virtual, or whatever that looks like,” he said.

So, Berry said, he reminds teachers they are also there to provide support during the coronavirus closures.

Education is still the top goal, he said.

“On top of that it’s just continuing to let our students know we love them, we care for them, we value them and we can’t wait to see them again,” Berry said.

Julie Edenborough of Guymon said she’s trying to stress to teachers that they must meet their students’ basic needs.

Edenborough is Director of Language Services at Guymon Public Schools. And she said she’s encouraging teachers to make contact with students and help fill their basic needs.

She estimates half of Guymon students don’t have home internet. She said public wifi at the city’s rodeo grounds is helping to fill that gap a little bit, but it’s still a challenge.

Edenborough said she and other teachers are trying to approach students with empathy and help meet their needs no matter how basic.

English learners will be even more challenged than their peers by distance learning, school leaders said.

Sometimes, school is the only place where students get English during their typical days, said Dan Ruhl, Oklahoma’s State Department of Education  Executive Director of English Language Proficiency.

Others might have more schooling in their native language or better resources at home to practice the language.

Ruhl said in a perfect world students would continue their academic growth. But that’s probably not realistic. So he’s tempered best case scenarios for growth from English learners who won’t be given assessment tests this year like they have been in the past.

“I would hope at minimum we just see a blip of a plateau,” he said. 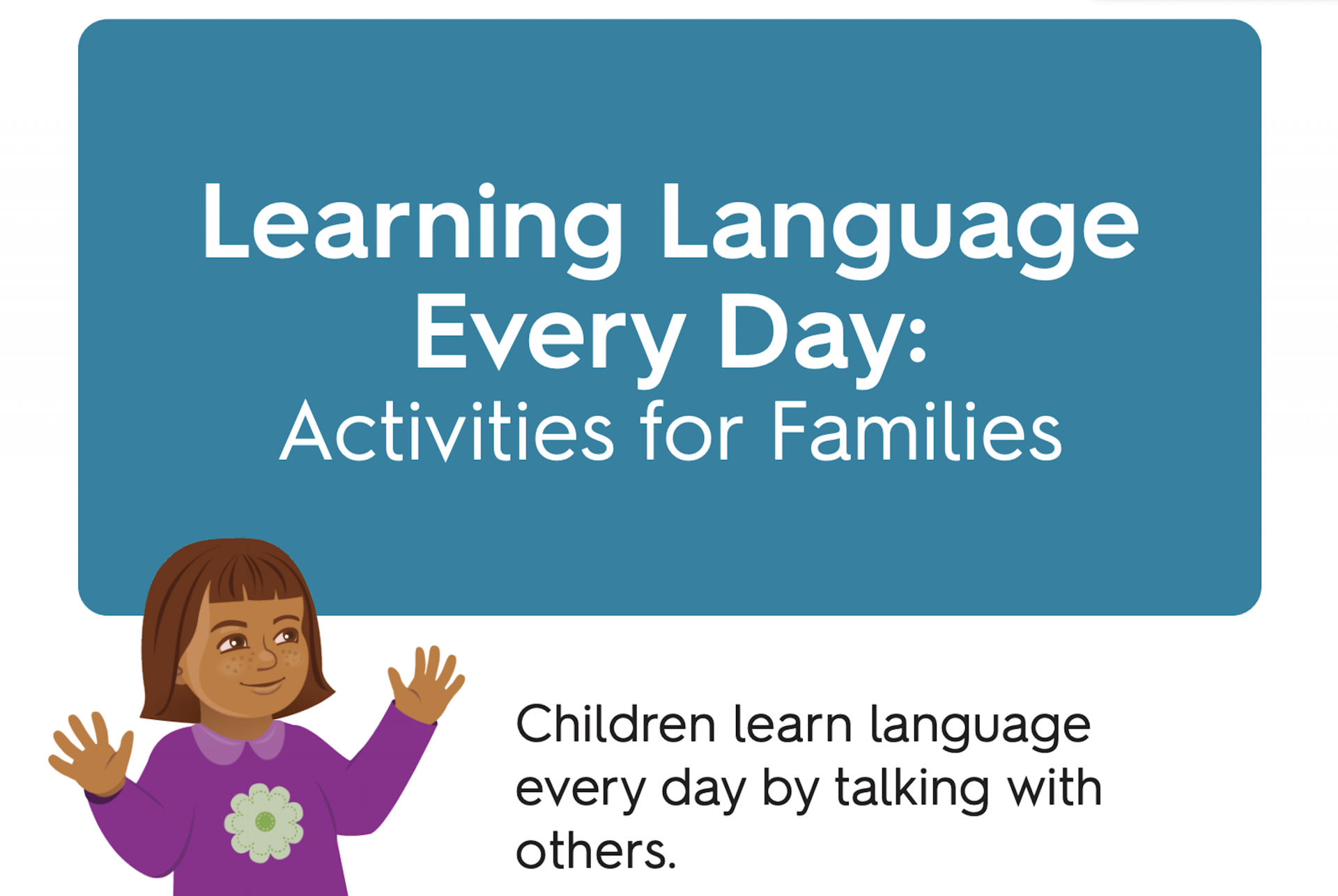 The first page of a packet for families to work with English learner students assembled by the World-class Instructional Design and Assessment consortium at the University of Wisconsin.

Tim Boals wants every teacher to think beyond their classroom subject.

“I need every science and math teacher to also see him or herself as a language teacher,” he said.

Boals is the Executive Director of the World-class Instructional Design and Assessment consortium or WIDA. And the Wisconsin-based educator has been a career-long English language teacher.

He said that the coronavirus presents unique challenges. So much of the best teaching for English learners involves in-person instruction. However, he said, teachers should be able to help these students.

Lesson plans for every subject will need to have language components built in, like they do in Oklahoma City.

He said “campfire” conversations about family history are incredibly valuable for learning. They build identity and language skills that are translatable to English. 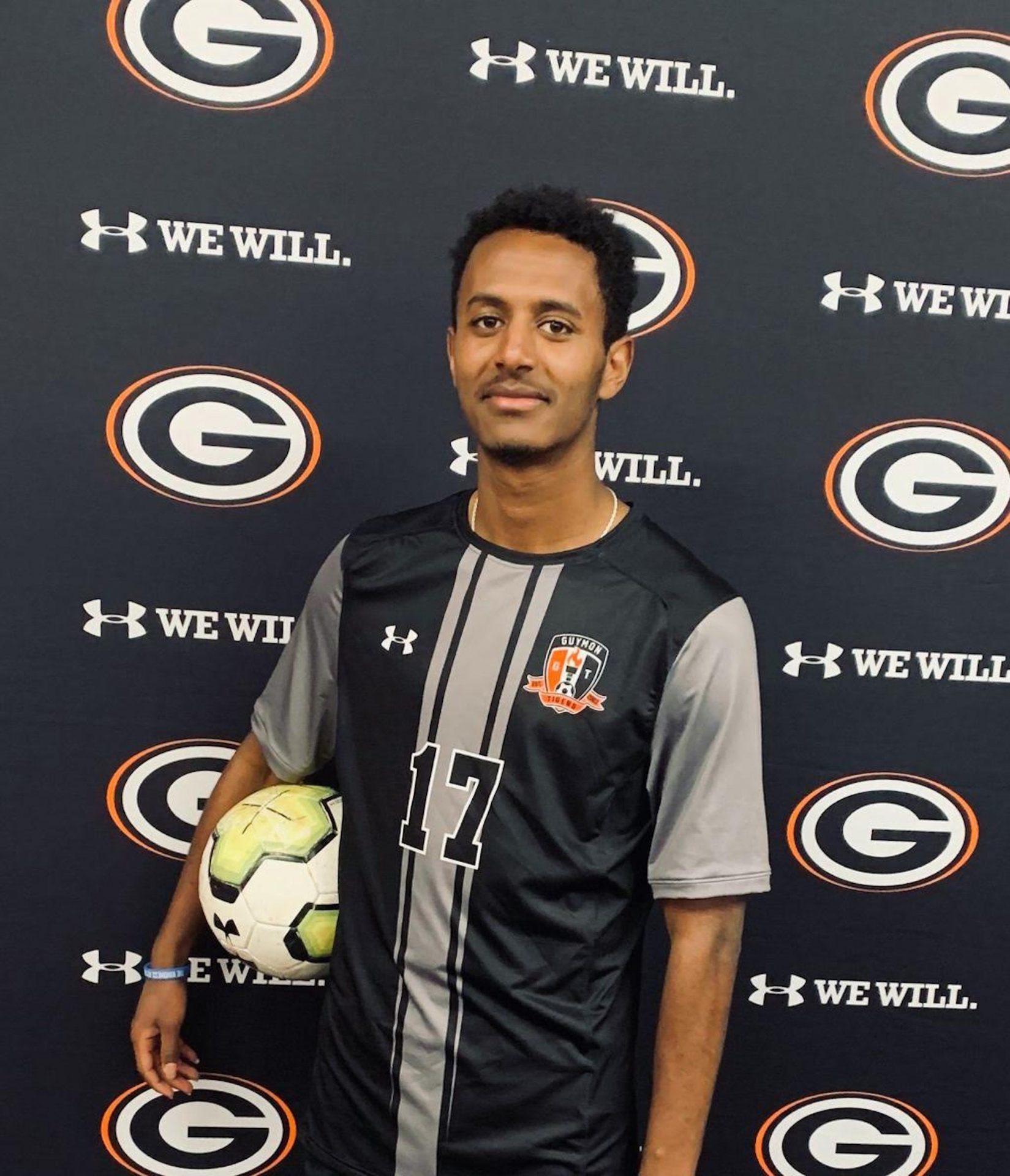 The senior at Guymon High School says before his school closed and he moved to distance education, he was getting a good American education. It exceeded the one he’d previously received as a child growing up in Ethiopia.

But, the move to online education is disappointing.

“My grade isn’t bad this year,” he said. “Honestly, I don’t know why but I’ve lost my appetite for study.”

Achisew started learning the language when he moved to Guymon from Ethiopia in 2018, so he has higher proficiency than many of his peers. But he misses playing on the Guymon High School soccer team and hanging out with his friends.

But like everyone else – no matter the language they speak – Achisew said he’s just trying to keep living his life. He’s limiting contacts with people other than his immediate family and he’s just waiting to see what the world will be like when the threat from coronavirus subsides.

“I didn’t expect this virus,” Achisew said. “So I don’t scare. But I am confused.”