177,000 would need mobile hotspots to do digital learning in their homes

With schools shuttered due to COVID-19, many Oklahoma school districts are pivoting to the internet for instruction.

More than 80 percent of the 546 districts that filled out the survey say they have access to online learning platforms that students can use at home.

The numbers were revealed by a survey sent out by the State Department of Education as Oklahoma prepped for distance learning during school closures. 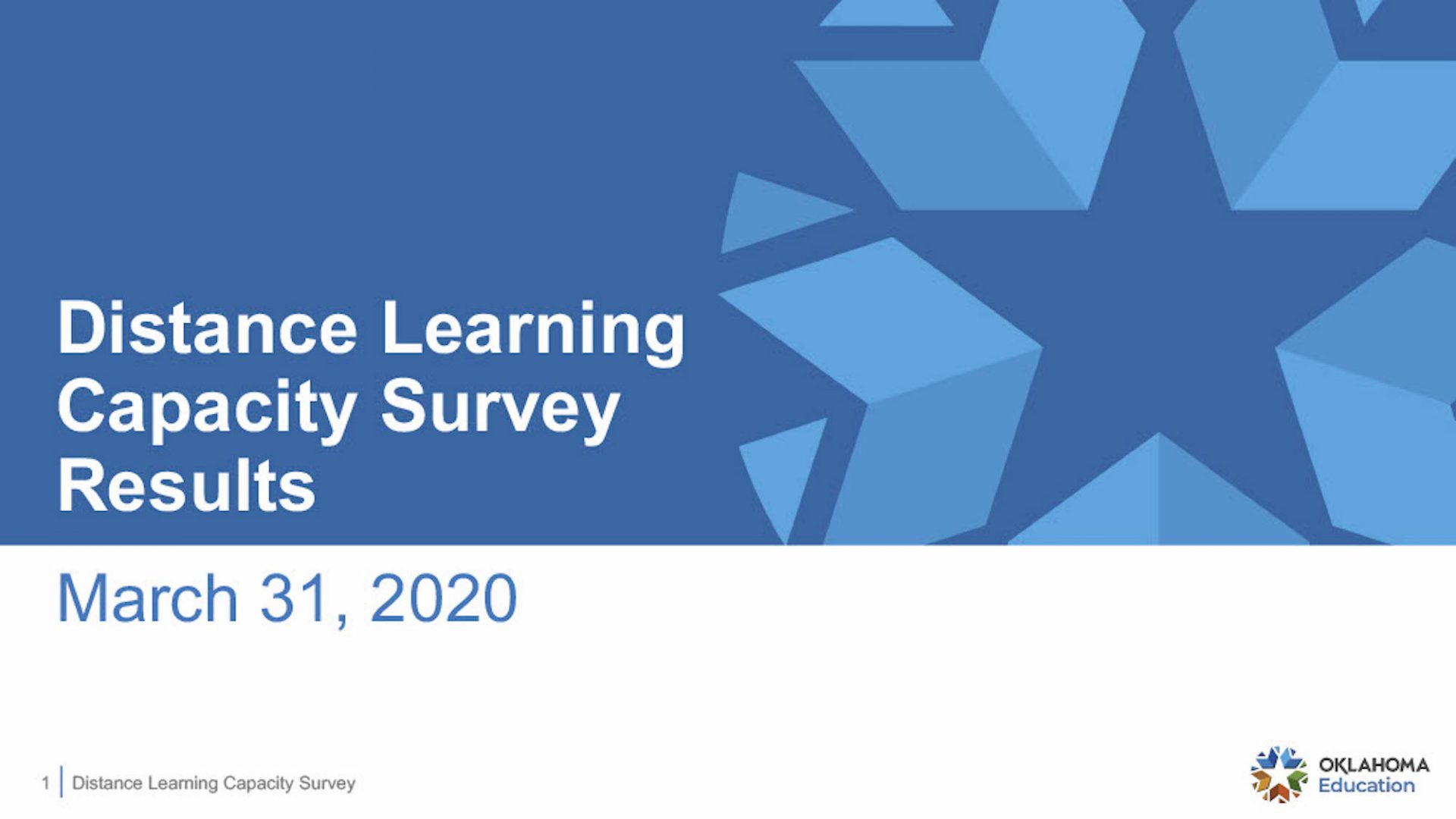 A presentation of the results of a distance learning survey conducted by Oklahoma’s State Department of Education. 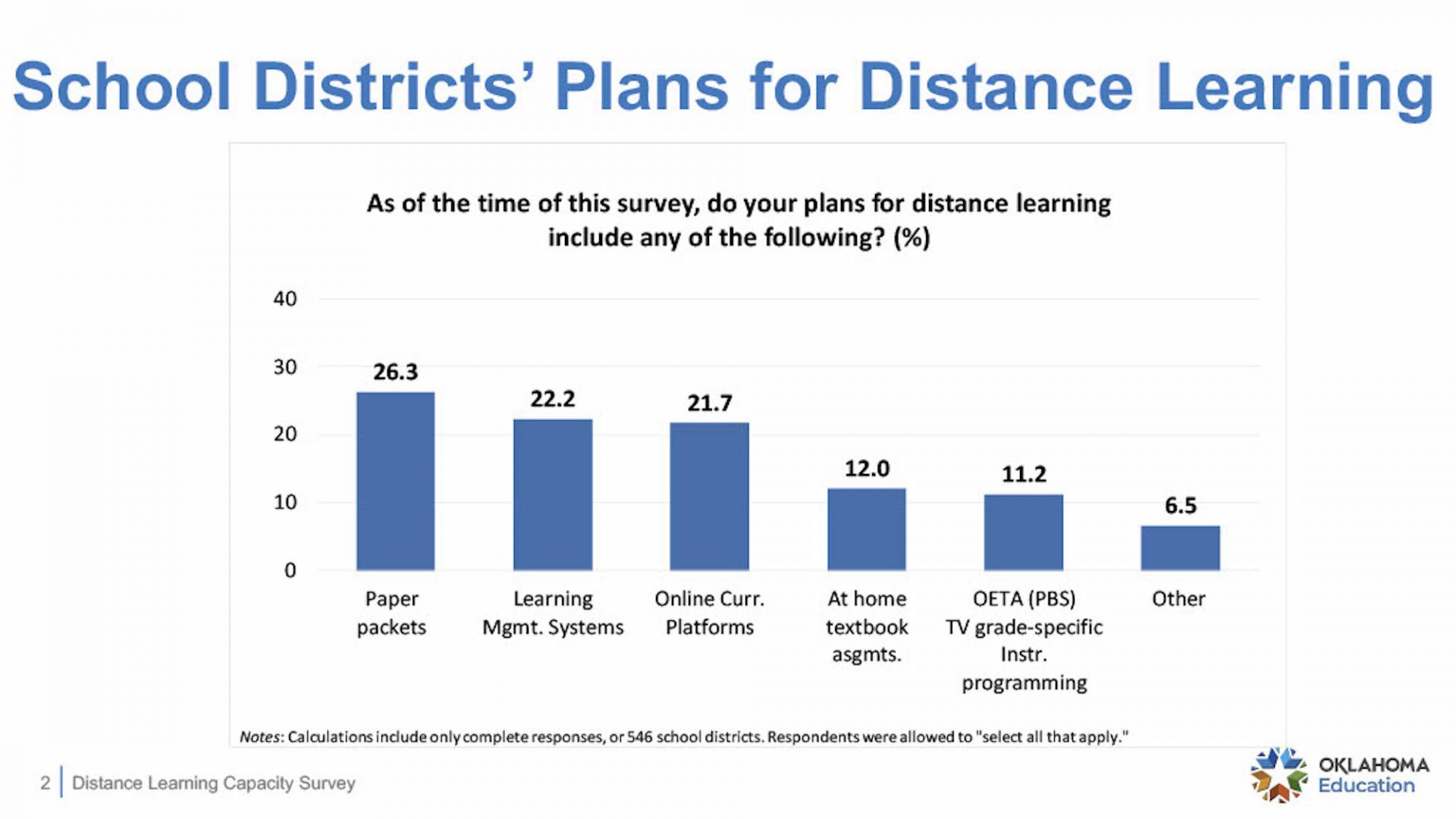 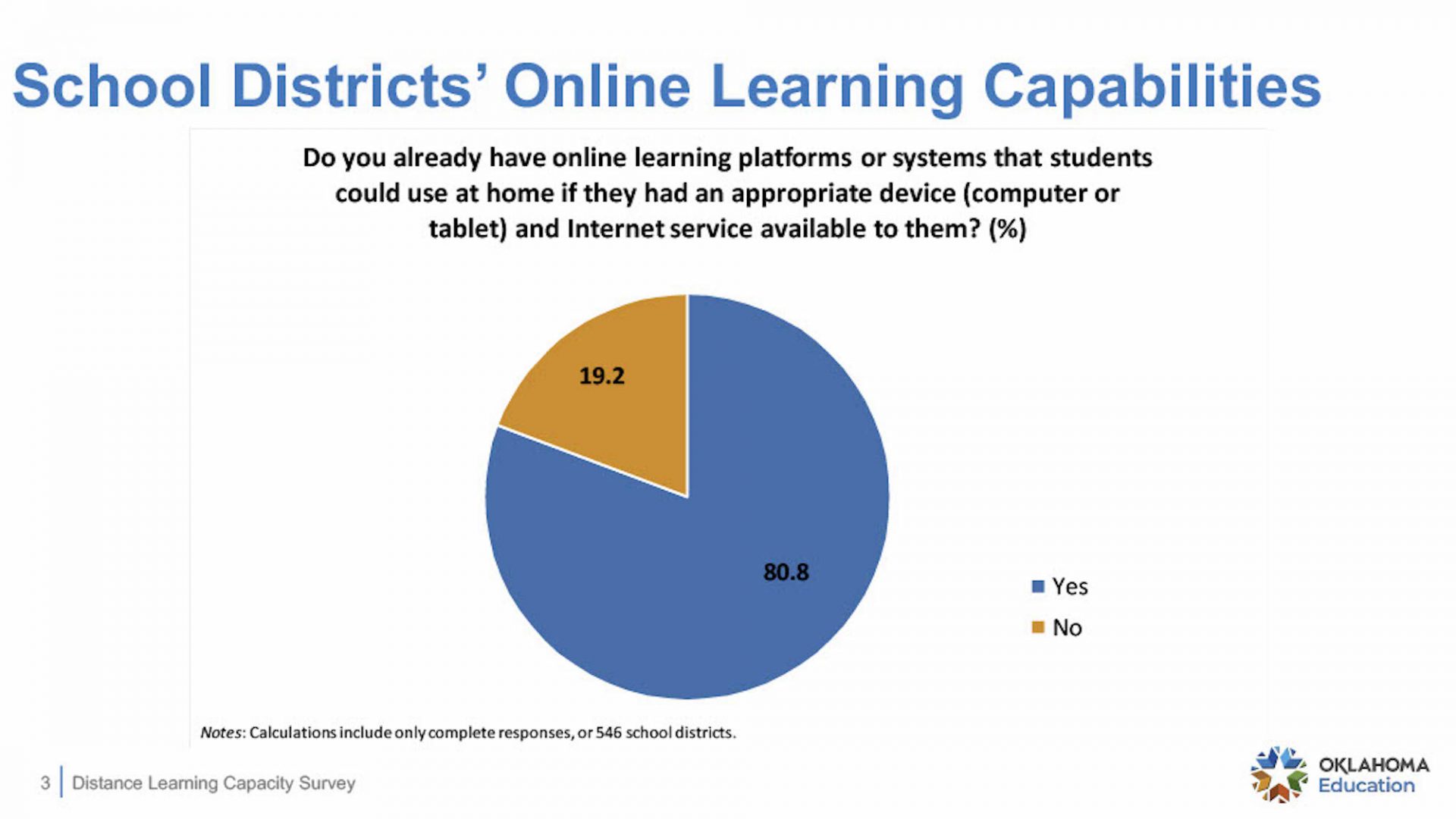 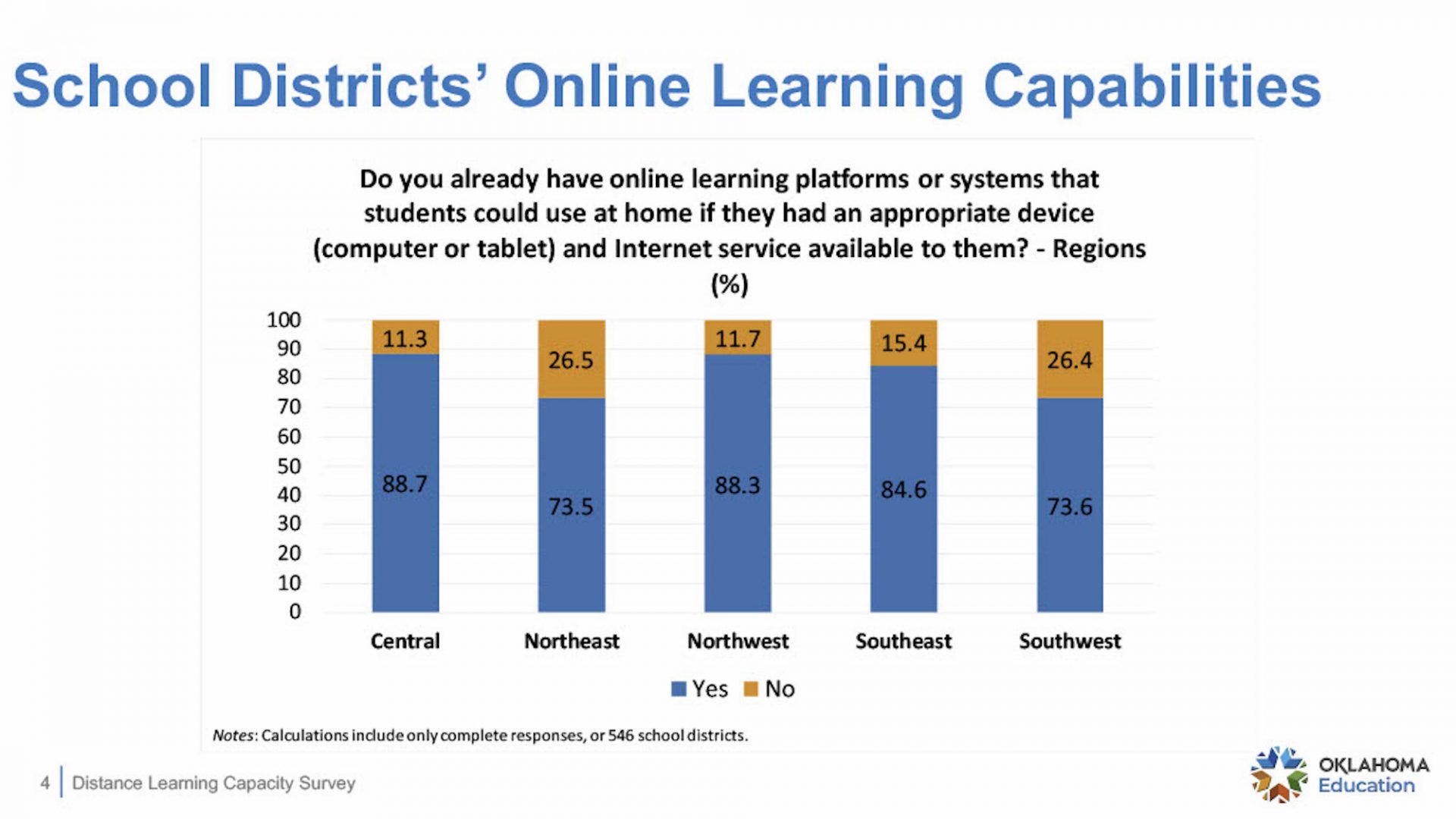 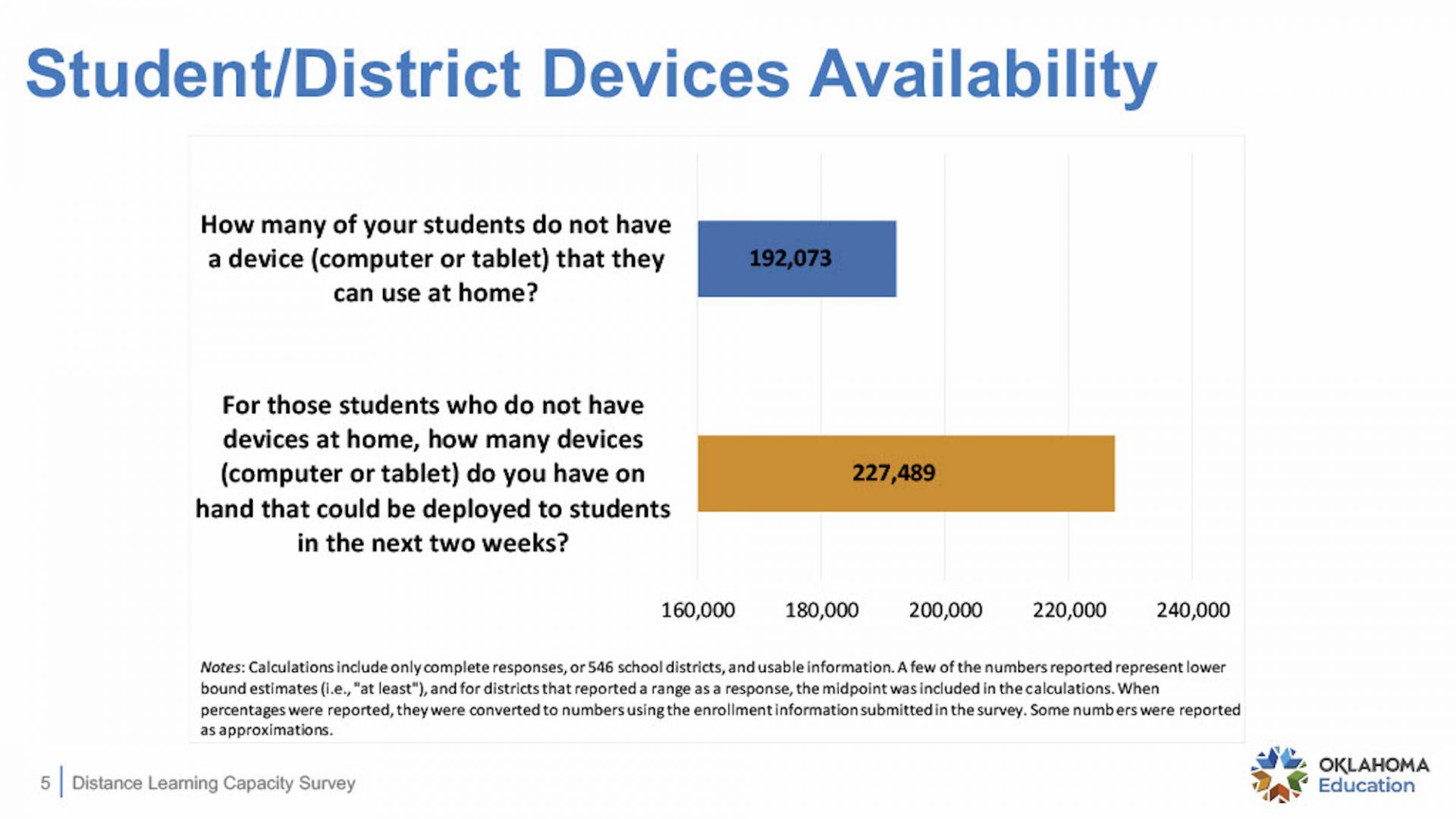 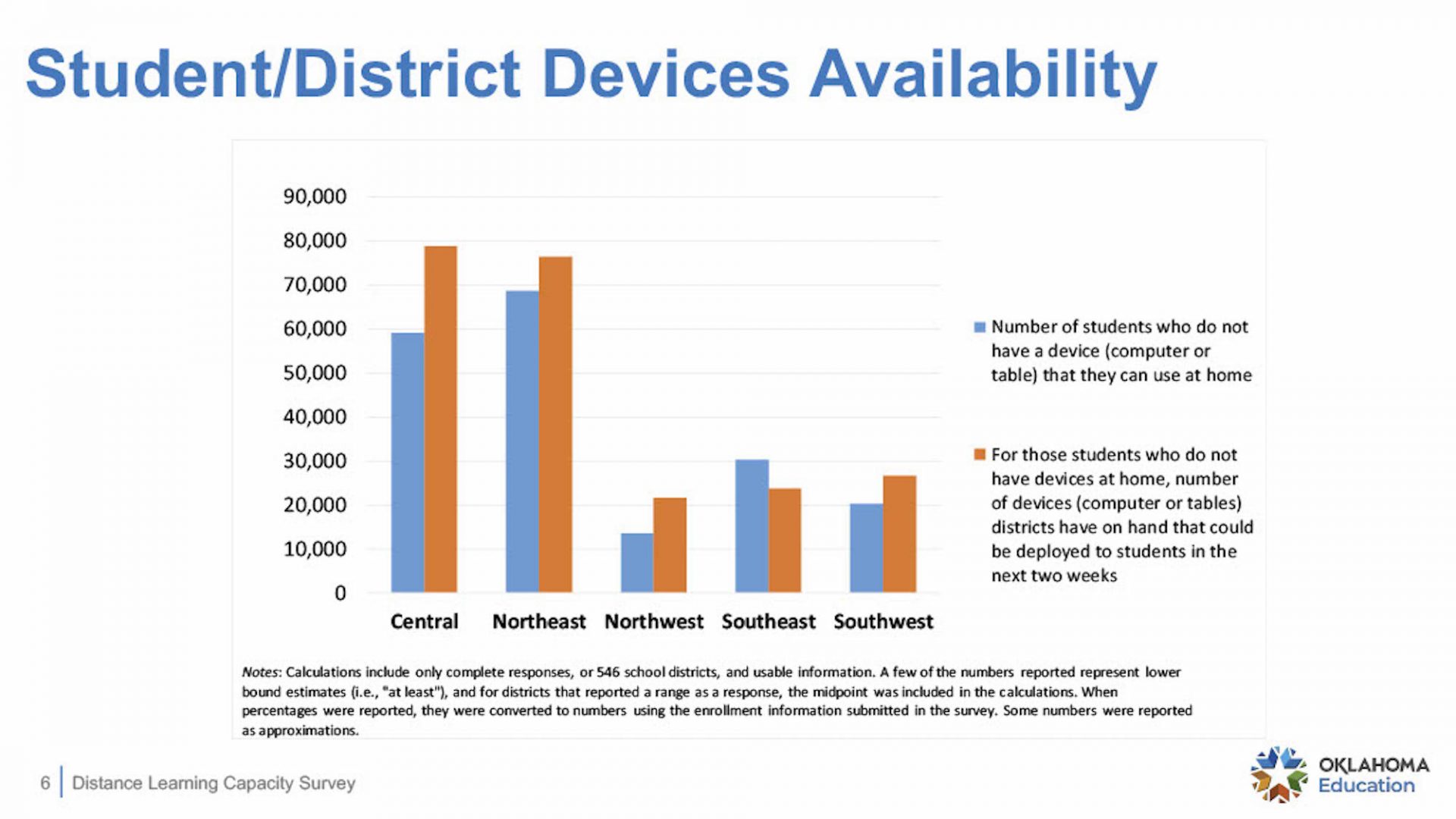 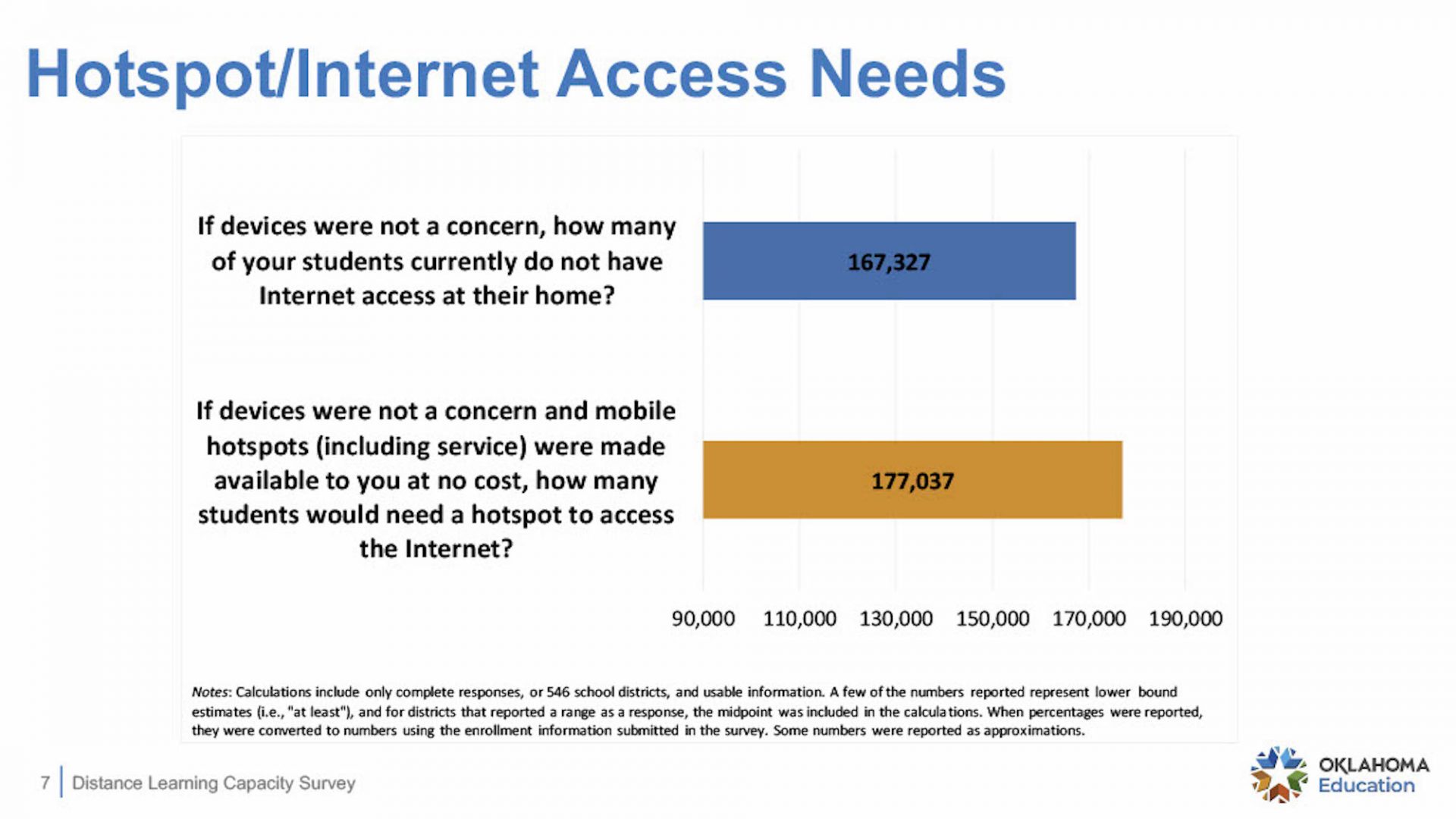 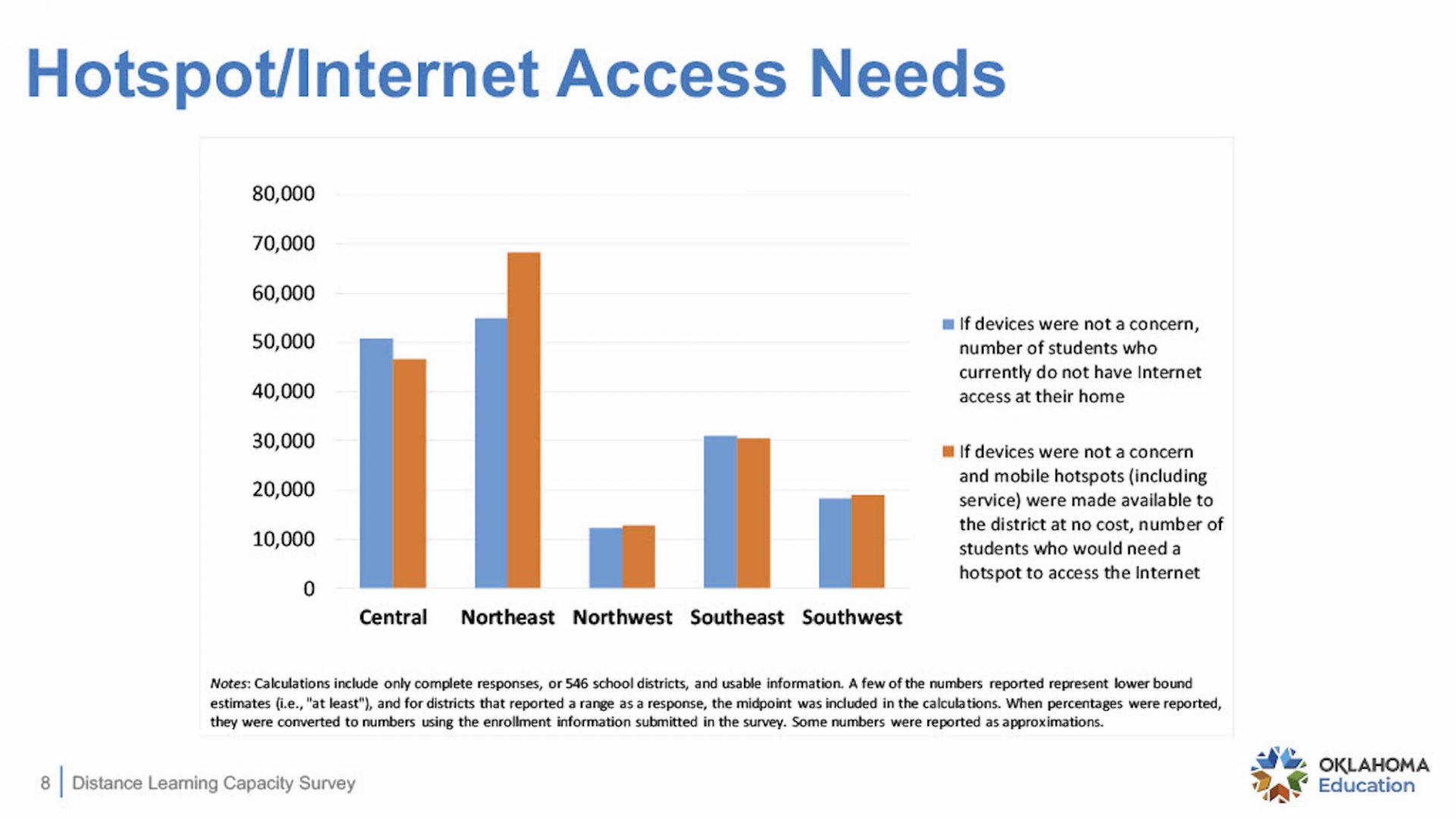 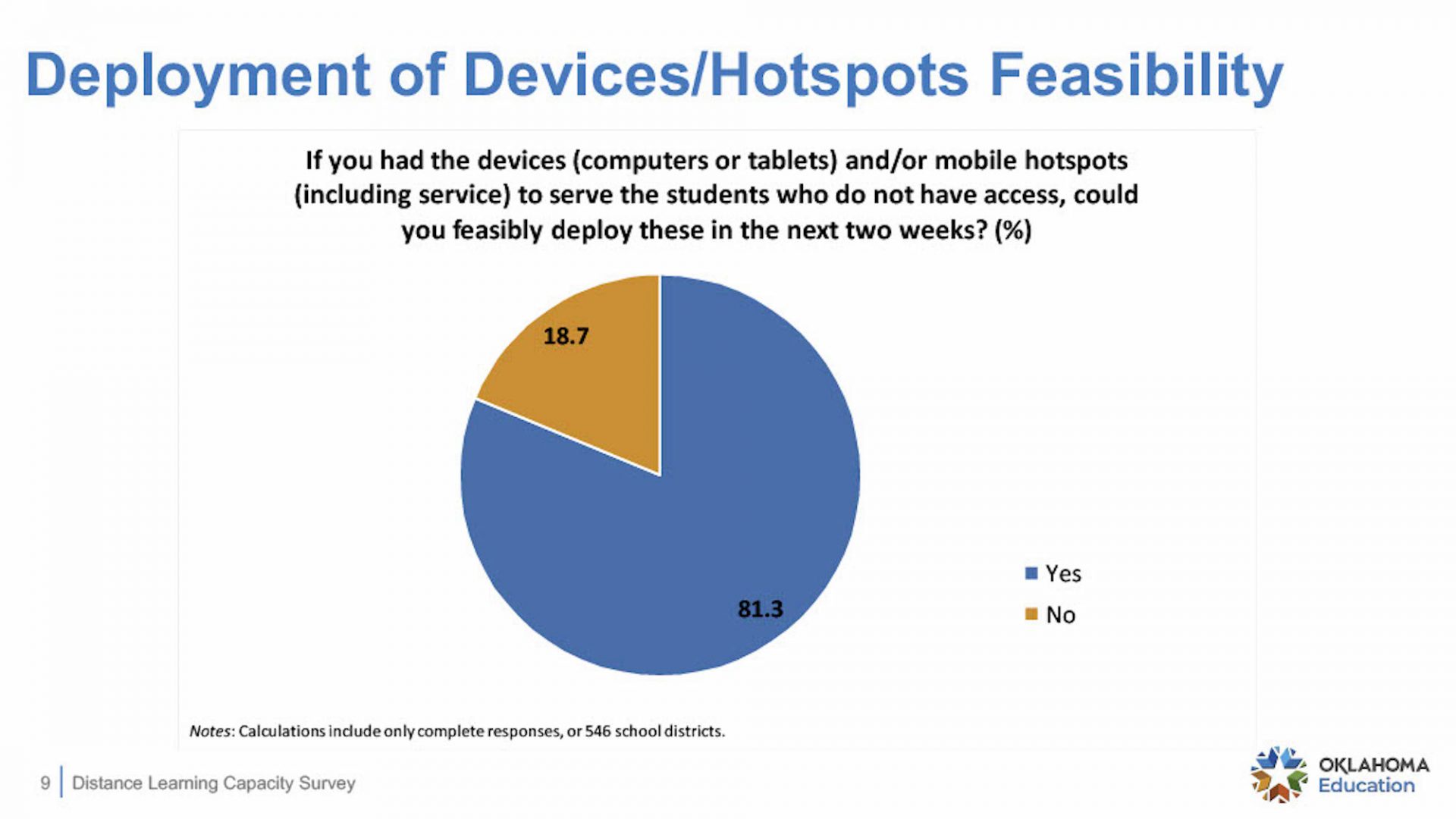 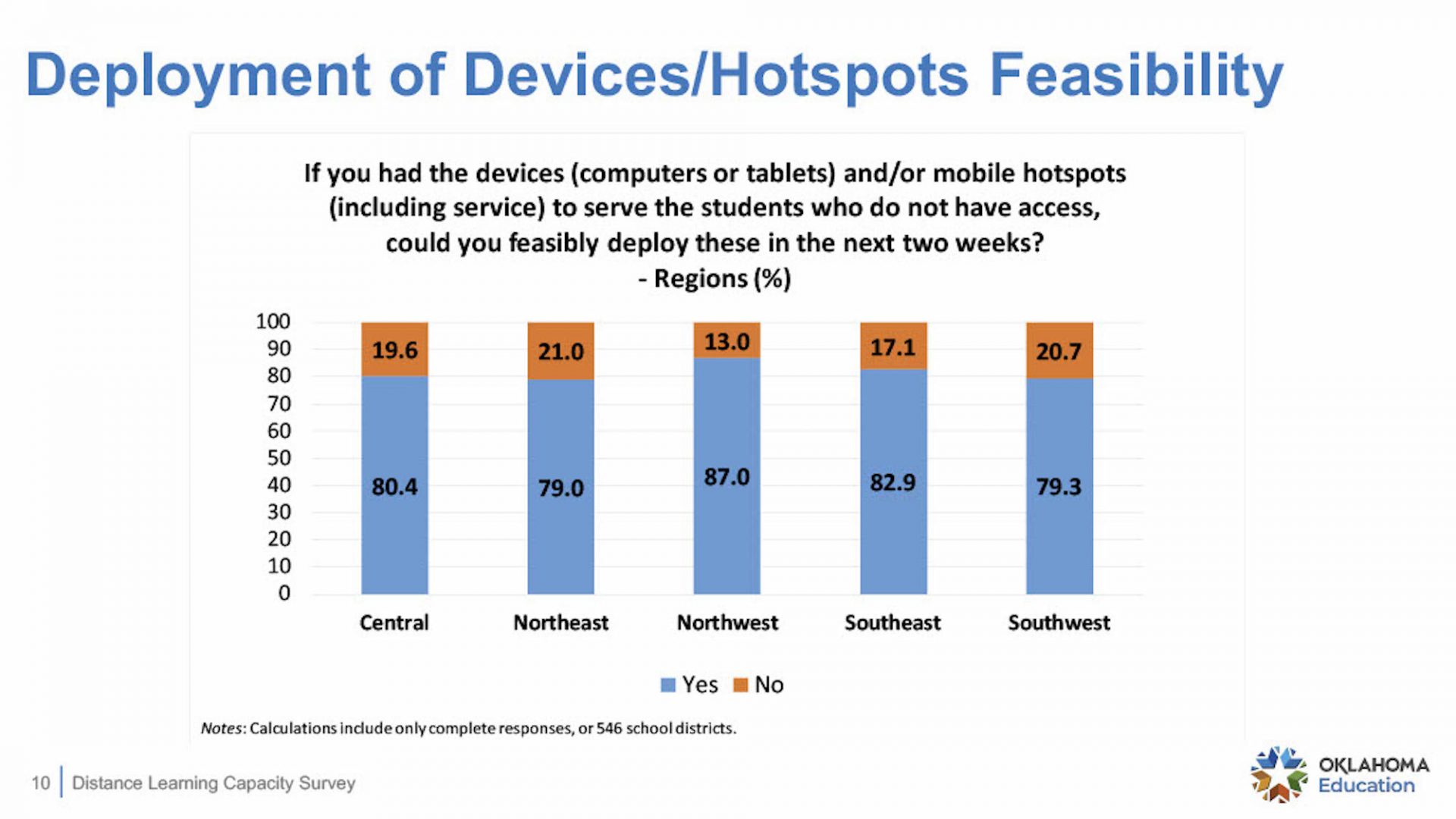 In an interview Monday, State Superintendent Joy Hofmeister said the COVID-19 closures have exposed an equity gap between students who have home internet access and those who don’t.

“I want every one of our Oklahoma students to have access to a computer and internet access at home,” she said. “And I won’t rest until that’s done.”

The best way to educate students while their schools are closed is through online learning, Hofmeister said.

“And that can’t happen without connectivity so let’s make it happen for all kids and be prepared for the summer or the fall with or without a pandemic,” she said.

Thursday, Hofmeister said through a spokeswoman her “priority is to get all public school students connected as soon as possible, but given the pandemic and resulting social distancing and shelter in place in many communities, it won’t be feasible to achieve in the next six weeks.”

Some students might have home access, but at least 177,000 would need hotspots to make distance education online feasible, according to the survey.

The survey also revealed that almost 200,000 students don’t have a computer or tablet at home. But, according to the survey, districts have 227,000 devices that they can distribute to students without a device.

Device and hotspot distribution could prove tricky, though.

Districts had to be prepped for online instruction if they wanted to get hotspots to their students, said Miami Public Schools superintendent Jeremy Hogan.

Hogan said his district, with about 2,300 students, will have a device for each household with a student. He said the district was also working to get 400 hotspots into students’ homes without internet access.

Education will be blended with paper packets and online instruction, Hogan said.

Miami already had a virtual program, so it was easier to make a pivot. But they did make sure they had additional hotspots. Before spring break, the district had about 200 hotspots.

But the reports about COVID-19 were disturbing.

“This is the direction it appears to be heading so we’re going to take… a chance,” Hogan said. “And we ordered another 150 hotspots.”

The district received them all, ordered another 100. They’ve received half so far with the other half on back order.