Oklahomans Decide Healthcare announced they have collected the required 178,000 signatures to get the question on the ballot. 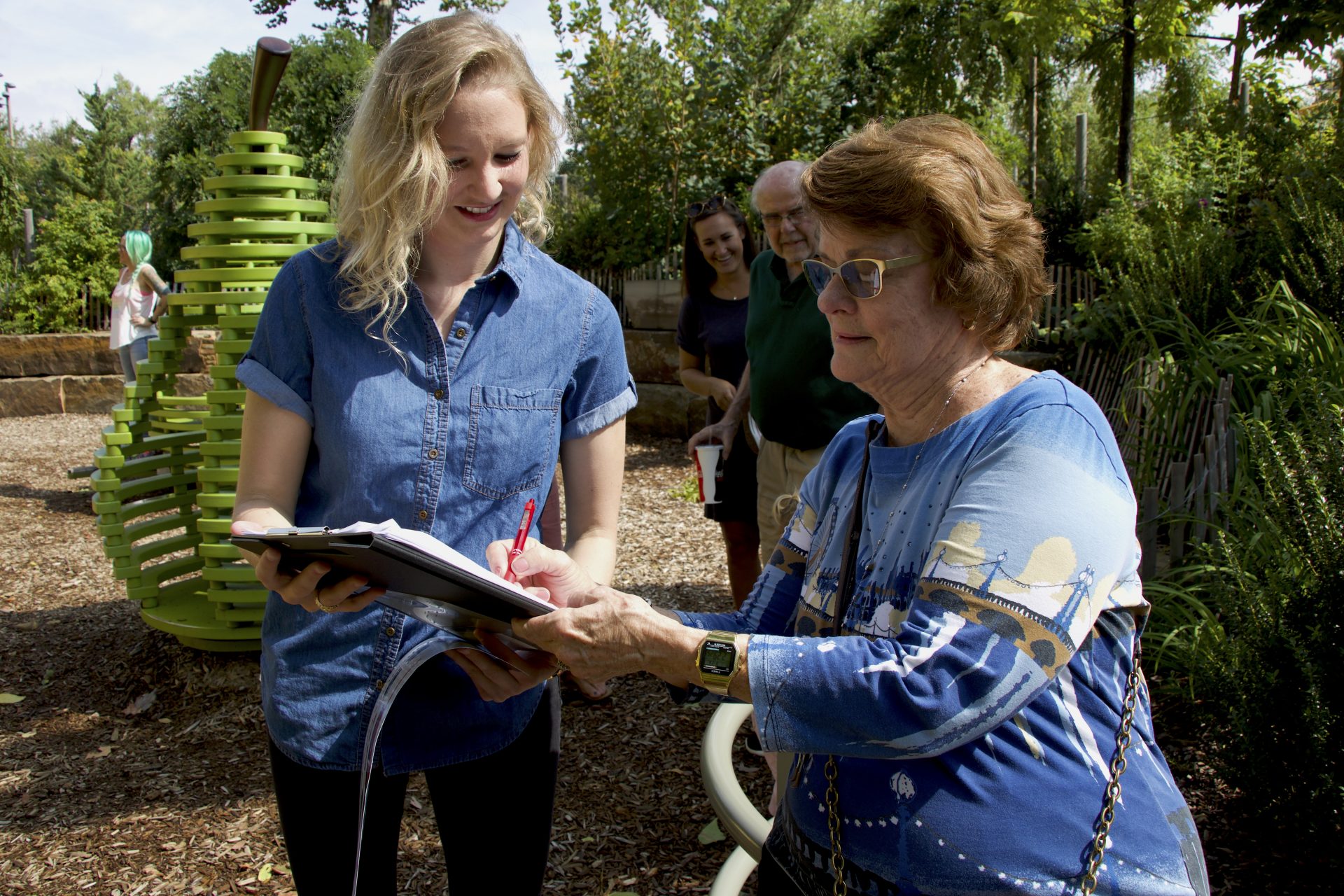 Martha Nell Jones (right) is quick to sign the Medicaid expansion petition because she has several friends “who are in the poverty level who have problems with medical bills and they have been saying how much they need it.” Jones says she’s disappointed in state legislators for not expanding Medicaid when they first had the option in 2010.

In between studying for medical school tests, Ashton Gores walks around the Gathering Place Park in Tulsa, asking people to sign a petition to put Medicaid expansion on the 2020 ballot.

“When I first came out here I was like ‘nobody’s going to want to sign this, I’ll just be sunburning for an hour’ but it was actually really receptive, and people are very nice,” she said.


Also called SoonerCare in Oklahoma, Medicaid is the federal-state health insurance program for low-income residents that 36 states and the District of Columbia decided to expand under the Affordable Care Act. However, Oklahoma politicians chose not to expand it — a decision the group Oklahomans Decide Healthcare is trying to reverse by collecting signatures to put the option on the 2020 ballot. Gores estimates she’s collected 60 signatures in her time as a volunteer.

“Soonercare only enlists certain people, like pregnant women who are under the poverty level by a certain number and have dependent children, but Medicaid expansion would allow people that are just under the poverty level so you don’t have to have these additional requirements to have health insurance, and it would be state-sponsored,” Gores explains.

It wasn’t supposed to be this way.

Before the Affordable Care Act (ACA), Medicaid was reserved mainly for pregnant women, poor children, low-income seniors and people with disabilities. With the ACA came the requirement for states to expand access to Medicaid to childless adults whose incomes are less than 138 percent of the federal poverty level, which is $12,140 for individuals.

A U.S. Supreme Court ruling in 2012 made the expansion optional for states. After that decision, Oklahoma Gov. Mary Fallin declined federal funds that would have footed the bill for Medicaid expansion.

The policy has become less bipartisan. In 2018, voters in the traditionally red states of Idaho, Nebraska, and Utah passed expansion and are now working on implementation.

Who would be affected by Medicaid expansion?

The U.S. Census Bureau reports that in 2017, Oklahoma had the second-highest uninsured rate in the country, at 14.2%. Only Texas was higher.

A recent analysis from the Oklahoma Hospital Association projected that 550,000 Oklahomans would be newly eligible for Medicaid.

The data, however, are more striking when looking just at those eligible under Medicaid expansion. Oklahoma Watch reports:

Almost 26.4% of low-income Oklahomans under 65 who make up to 138% of the poverty level lack insurance, according to the Census Bureau. In rural Oklahoma, particularly in the Panhandle and northwest corner of the state, the number is higher, with uninsured rates at or over one-third of the population in several counties.

Rural areas tend to be poorer and have higher rates of unemployment and disability — all factors linked to Medicaid eligibility.

University of Colorado professor Richard Lindrooth found that the probability that a hospital would close was reduced by more than 81 percent if a state expanded Medicaid.

“We performed a more rigorous analysis and controlled for things like local market conditions such as unemployment rate, median income and also hospital characteristics to see if the increased probability of closure in states that did not expand Medicaid remain — and it did,” Lindrooth said.

As the ballot measure push continues, Oklahoma Gov. Kevin Stitt, a Republican, recently created a bipartisan legislative committee charged with deciding whether to endorse Medicaid expansion or other policy moves.

If Oklahoma expands Medicaid, the federal government would pay 90 percent of the cost. The state would pay the remaining 10 percent, estimated to be $100 million dollars.

Quinn asked “So, if we add 250,000 people [ as Medicaid recipients], and that match goes from nine-to-one to five-to-one, what do we do then?

“Well five-to-one is still five-to-one,” Spicer answered. “I liken it to other federally supported programs and industries in our state. If there was a [military] base expansion initiative to add $200 million to one of our bases, knowing that there have been base closures before, we’d still take the $200 million. I think if it’s a road or a bridge or an airforce base, we’re not asking that question.”

Spicer also told legislators that OU Medicine spends more than $100 million per year on uncompensated care, meaning health care that the hospital is legally required to provide that they are not reimbursed for either by government or private health insurance, in many cases because the patient is uninsured.

“People who are uninsured in Oklahoma right now, are still getting a lot of health care, they just aren’t able to pay their bills,” he said.

Searing said states don’t see a huge expense when they expand because the state is already picking up a lot of the health care tab. 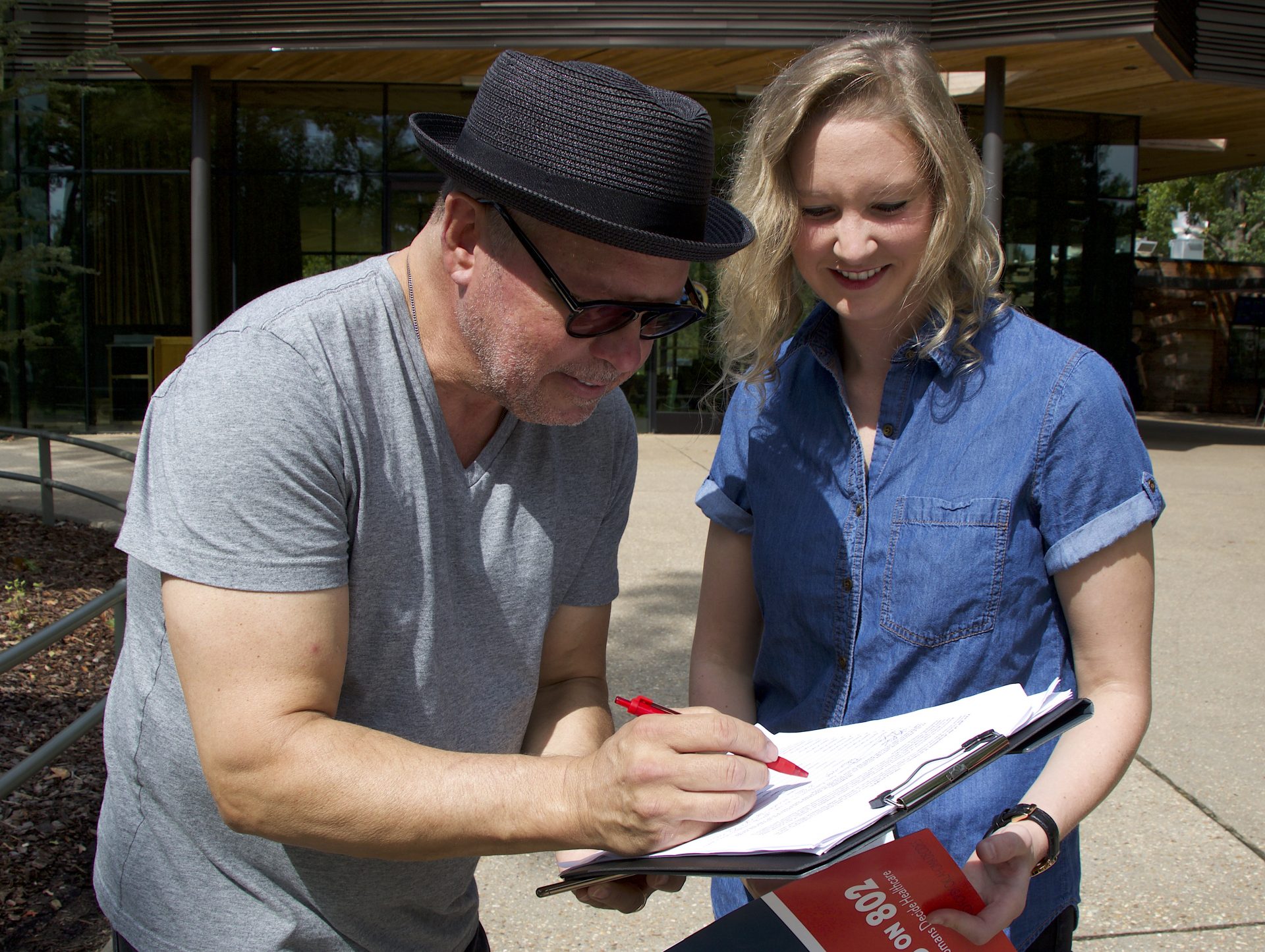 A registered voter signs the petition to put Medicaid expansion on the Oklahoma ballot. Ashton Gores (right) volunteers to collect signatures in the Tulsa area.

Searing cautions legislators in the 14 states that have so far chosen not to expand Medicaid. He believes the healthcare gap between expansion and non-expansion states will continue to widen.

“It’s created a two-tier health system,” he said. “States like Oklahoma, that have poor health rankings, will continue to see them get worse as more states expand Medicaid and they don’t.”

Oklahomans Decide Healthcare recently announced they have collected the required 178,000 signatures to get the question on the ballot and will soon turn them into the Secretary of State’s office to be validated.

However, the proposed ballot language is silent on how to pay for the expansion, likely leaving that decision up to state lawmakers.