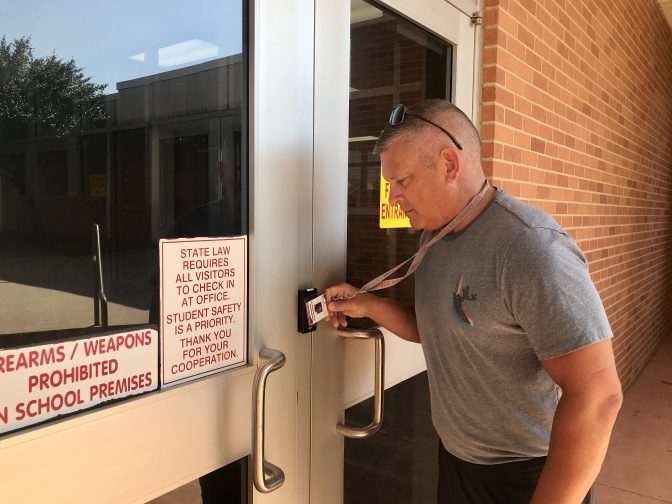 With more mass shootings happening every year, protecting kids has become a priority for school administrators in Oklahoma. However, safety looks very different depending on each school district’s budget.

With nearly 25,000 students, Moore Public Schools is one of Oklahoma’s largest school districts. Last fall, the district implemented a new high-tech building entry system across its 35 campuses that uses student and staff identification cards to electronically open doors and collect data on who enters where and when.

“It is one of many layers that we have put together as far as the safety and security,” explained District Superintendent Robert Romines.

The district is also rolling out a new emergency communications system. It employs a full-time administrator who focuses exclusively on safety and security. And school resource officers, which are armed law enforcement, are stationed at each middle and high school.

“Twenty-five years ago, when I started in this business as a teacher, this was nothing that we ever had to consider or focus on,” Romines said. “But times have changed.”

The new building entry system cost the district close to $400,000, and it was paid for with private donations raised through the Moore Public Schools Foundation. Clayton Ramick, the foundation’s director, said the community was spurred into action by the 2018 school shooting that killed 17 people in Parkland, Florida.

“After Parkland, it just clicked with this community that we that we needed to step up,” Ramick said.

The Parkland shooting sparked a wave of school safety legislation. At least 26 states immediately responded by increasing or adding new funding for school safety, but Oklahoma was not one of them. That means the state’s school districts are largely on their own when it comes to safety.

In the small town of Hartshorne, about 150 miles southeast of Moore, protecting the district’s roughly 800 students is also a major concern, but budgeting for safety involves tradeoffs.

“Do you give them (students) a safe environment? Or do you provide a teacher, or a computer, or a textbook?” asked Superintendent Jason Lindley. “Those are not good decisions to have to make.”

Like Moore, Hartshorne has tightened building access. They also have security cameras and some windows are covered in film that reduces visibility from the outside. This year, an increase in school funding by the state legislature allowed the district to hire a private security guard. However, Lindley says one guard isn’t enough to cover all three of the district’s buildings because they are so spread out.

“We can’t afford more than one (guard),” Lindley said. “So we try to fill the gaps with with armed staff.”

Lindley says five of his employees already carry guns on campus, and more are getting ready to go through training required by a 2015 state law allowing school boards to arm staff.

One of Hartshorne’s armed staff members said frequent news of mass shootings motivated him to take on the extra responsibility, even though it does not come with additional compensation.

“It does give me a sense of security, but I’m not going to sit here and tell you that we’ve been trained to the point that we’re going to know exactly what to do and when that when that time happens,” the staff member said. “Hopefully we never have to to fire our weapon.”

The district does not want to reveal the identities of armed staff.

“It is tough to come in and know that we have a weapon, because that’s just not what we’re really supposed to be doing,” the staff member said. “I wish that we had enough money, or our state government would someway, somehow come up to where we could put security guards in every school.”

Addressing Safety In Other Ways

Aside from passing along federal grants, Oklahoma has not provided schools with extra money to spend on security, but the state has done other things. In 2013, following the shooting at Sandy Hook Elementary School in Connecticut, lawmakers created the Oklahoma School Security Institute, an agency that conducts free safety assessments for school districts upon request.

Gary Shelton, OSSI’s program manager, says the agency has assessed about one third of public school districts since its inception. During his time at OSSI he has noticed major differences in the resources available to larger districts, like Moore, versus smaller districts, like Hartshorne.

“There is somewhat of a disparity there as it relates to security,” Shelton said.

Shelton says some of the most effective safety measures, such as locking doors and enacting stricter visitor policies, cost nothing, but he is keenly aware of the financial constraints many schools face.

“I could go out and recommend all sorts of things to make their school very secure, but there’s a cost associated with that,” Shelton explained. “One of the things that we really have to be conscious of when we do our assessments is making suggestions or recommendations that are low cost to no cost.”

Administrators are also taking matters into their own hands. According to Shelton, many are using cost-sharing agreements with local police departments to pay for school resource officers. And a new group of safety-focused administrators has begun meeting regularly.

Jennifer Newell, who previously worked at OSSI, became Mustang Public Schools’ first Director of School Safety and Security last year. Around the same time, she organized what she calls a “consortium” of people from around the state with similar jobs.

“When I was still at the Oklahoma School Security Institute, one of the things that was constantly on my mind was that schools were missing opportunities to visit with each other to learn from each other,” Newell said.

Newell hopes to grow the group and host conferences in the future.

In addition to allowing school staff to arm themselves and the work of OSSI, Oklahoma has taken one other recent action to address school safety. This year the state entered into a $3 million one-year contract for an app called Rave Panic Button, which connects school staff to first responders, among other things. It is now available to all public schools.

Districts across the state are investing in safety, but without additional funding from the state, it will continue to be up to local administrators to raise extra dollars, find federal money or simply work within their budget to keep kids safe.