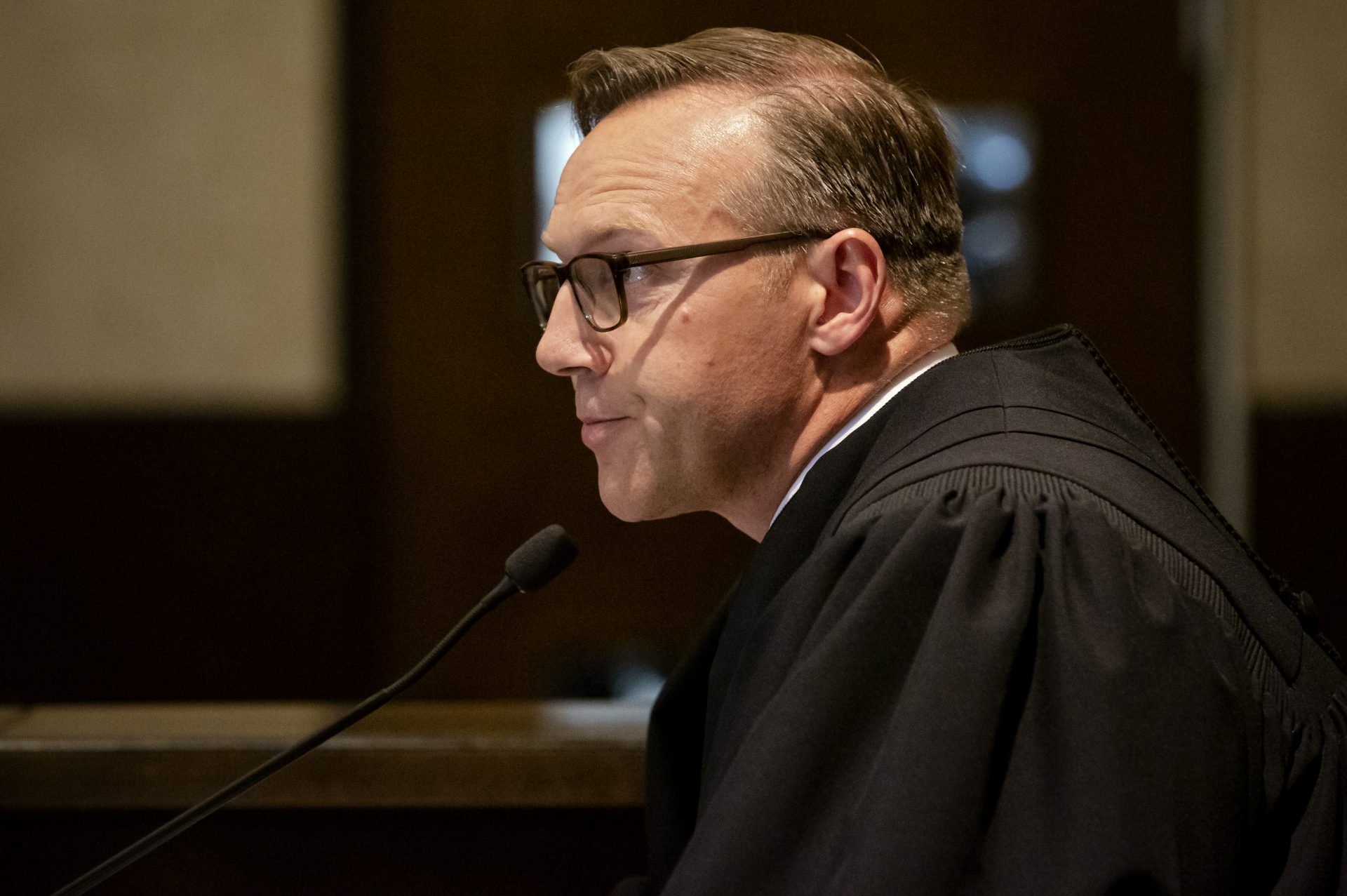 Judge Thad Balkman reads a summery of his decision in the opioid trial at the Cleveland County Courthouse in Norman, Okla. on Monday, Aug. 26, 2019.

An Oklahoma judge has ruled that drugmaker Johnson & Johnson helped ignite the state’s opioid crisis by deceptively marketing painkillers, and must pay $572 million to the state.

Oklahoma sought $17.5 billion, blaming Johnson & Johnson for fueling the crisis that has claimed the lives of more than 6,000 people in the state.

It’s the first ruling to hold a pharmaceutical company responsible for one of the worst drug epidemics in American history.

Judge Thad Balkman delivered his decision from the bench, after presiding over a seven-week civil trial in the college town of Norman, Okla.

“The defendants caused an opioid crisis that is evidenced by increased rates of addiction, overdose deaths and neonatal abstinence syndrome in Oklahoma,” Judge Balkman said in a statement.

Johnson & Johnson immediately released a statement saying that the company “plans to appeal the opioid judgment in Oklahoma.”

Balkman’s ruling affirmed the key legal argument of the state’s case, that the drugmaker had created a “public nuisance.”

“The state met its burden,” Balkman said in his comments, proving the company acted improperly with its “misleading marketing and promotion of opioids.”

The amount Balkman ordered Johnson & Johnson to pay falls far short of the $17.5 billion state officials requested, but in his ruling he acknowledged the cost of the recovery effort will be much larger.

Indeed, according to estimates detailed in this decision, the company’s $572 million payment would only fund Oklahoma’s opioid recovery plan for a single year.

“Though several of the state’s witnesses testified that the plan will take at least 20 years to work,” Judge Balkman wrote, “the state did not present sufficient evidence of the amount of time and costs necessary beyond year one to abate the opioid crisis.”

That portion of the ruling took some observers by surprise.

“If Johnson & Johnson is responsible for the opioid epidemic as a long-term problem, why only provide enough money for one year?” says Richard Ausness who teaches law at the University of Kentucky and follows opioid litigation closely.

Judge Balkman declined to answer questions about the ruling.

But in his decision Balkman laid out an abatement plan that includes about $264 million for addiction treatment services, $103 million for pain management benefits, $57 million for universal screening services, $20 million for medical treatment for infants born with neonatal abstinence syndrome, and $11 million for investigatory and regulatory actions.

He also said that outside attorneys hired by the state are entitled to collect fees from the abatement proceeds pursuant to their contract, which calls for them to collect 25% from the first $100 million and 20% from $100 million to $200 million.

“This judgment is a misapplication of public nuisance law that has already been rejected by judges in other states,” said Michael Ullmann, executive vice president, general counsel for Johnson & Johnson, in a statement. “The unprecedented award for the state’s ‘abatement plan’ has sweeping ramifications for many industries and bears no relation to the company’s medicines or conduct.” 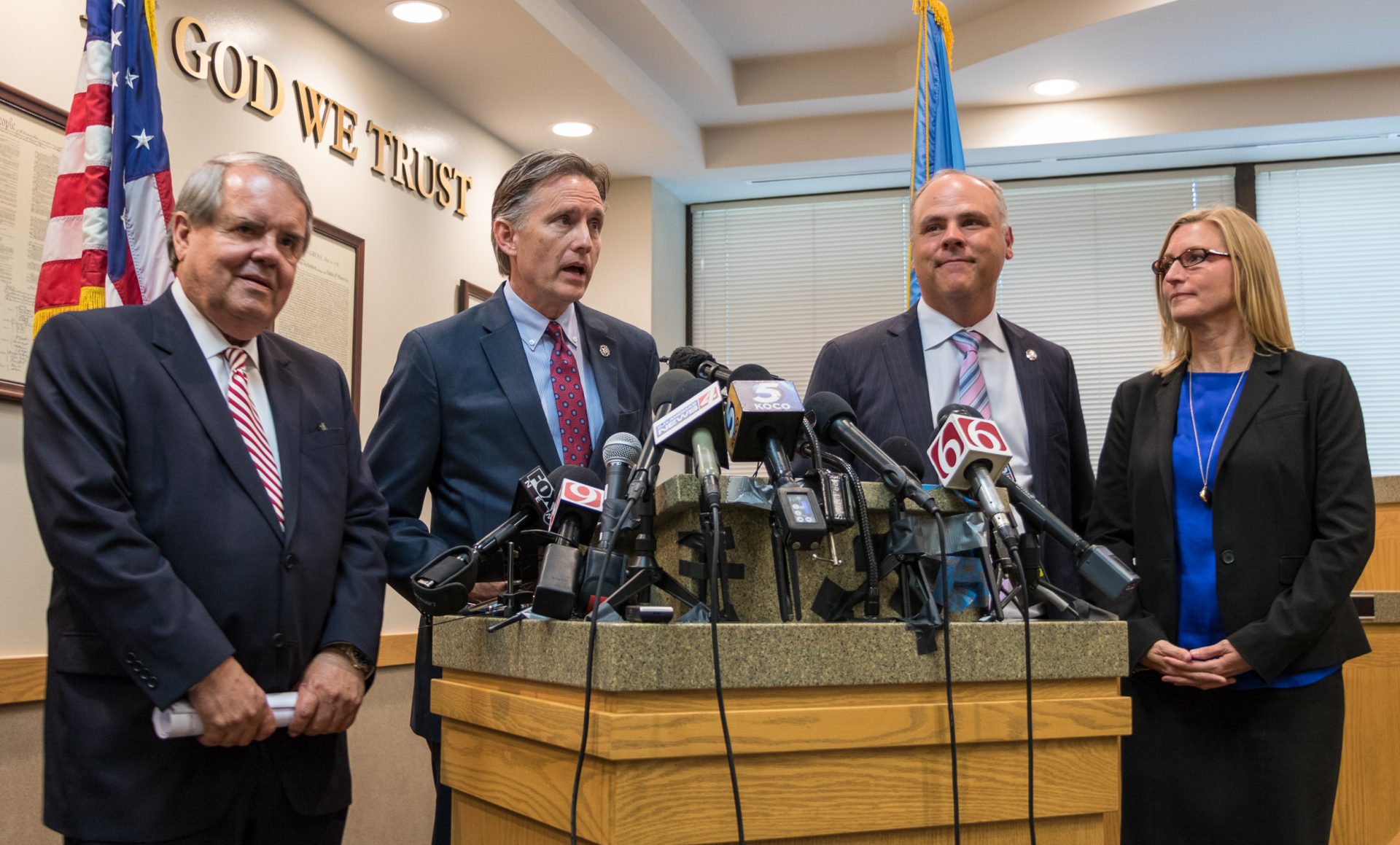 Attorney General Hunter celebrated the state’s win, despite the discrepancy between the $572 million award and the billions the state had asked for.

“It’s going to be an important step forward in dealing with the epidemic,” he told reporters. “Certainly we would have liked to walk out of here with $17 billion, but realistically we’ve been able to get together almost a billion dollars to help Oklahoma.”

Initially, Hunter’s lawsuit included Purdue Pharma, the maker of OxyContin. In March, Purdue Pharma settled with the state for $270 million. Soon after, Hunter dropped all but one of the civil claims, including fraud, against the two remaining defendants.

Just two days before the trial began, another defendant, Teva Pharmaceuticals of Jerusalem, announced an $85 million settlement with the state.

Both companies deny any wrongdoing.

Johnson & Johnson marketed the opioid painkillers Duragesic and Nucynta. Lawyers for the company say its products were highly regulated by the Food and Drug Administration, among other agencies, and that the state did not provide any evidence showing the company’s sales practices helped fuel the crisis. It argued these branded opioid products made up less than 1% of total opioid prescriptions in Oklahoma.

As NPR reported in July, during the trial the state’s expert witness, Dr. Andrew Kolodny, testified that Johnson & Johnson also profited by manufacturing raw ingredients for opioids and then selling them to other companies, including Purdue, which makes Oxycontin. 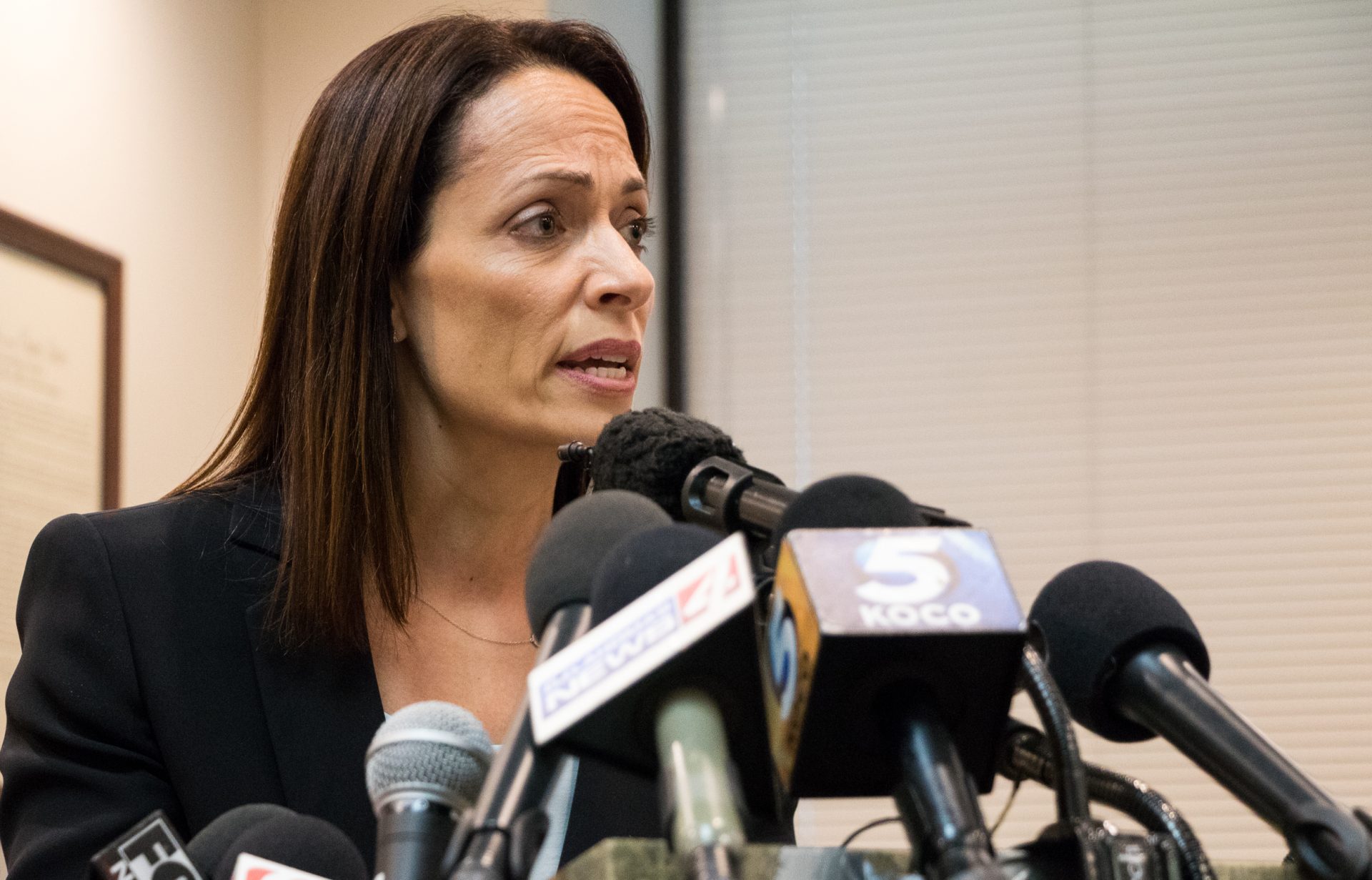 Sabrina Strong, attorney for Johnson & Johnson speaking at a press conference after the verdict.

Speaking on behalf of Janssen and Johnson & Johnson Monday, attorney Sabrina Strong told reporters that “litigation is not the answer” to the opioid crisis.

“Johnson & Johnson did not cause the opioid crisis. Although it includes some diversion of prescription medicine, it’s largely driven by illegally manufactured drugs that are coming into the country from Mexico and elsewhere,” she said.

The case is being closely watched by plaintiffs in other opioid lawsuits, particularly the roughly 2,000 cases in the National Prescription Opiate Litigation which is pending before a federal judge in Ohio. That consolidated lawsuit includes 22 defendants — opioid manufacturers and distributors, including Johnson & Johnson.

In a statement, the co-lead plaintiff attorneys of the Ohio litigation called today’s ruling a “milestone,” saying the ruling in favor of Oklahoma’s public nuisance claims is a “critical step forward” for the communities they represent.

“The ruling in favor of the State of Oklahoma’s public nuisance claims confirms what communities have been saying for some time: the opioid epidemic significantly interfered with public health,” said the attorneys, Paul T. Farrell Jr., Paul J. Hanly, Jr., and Joseph F. Rice.