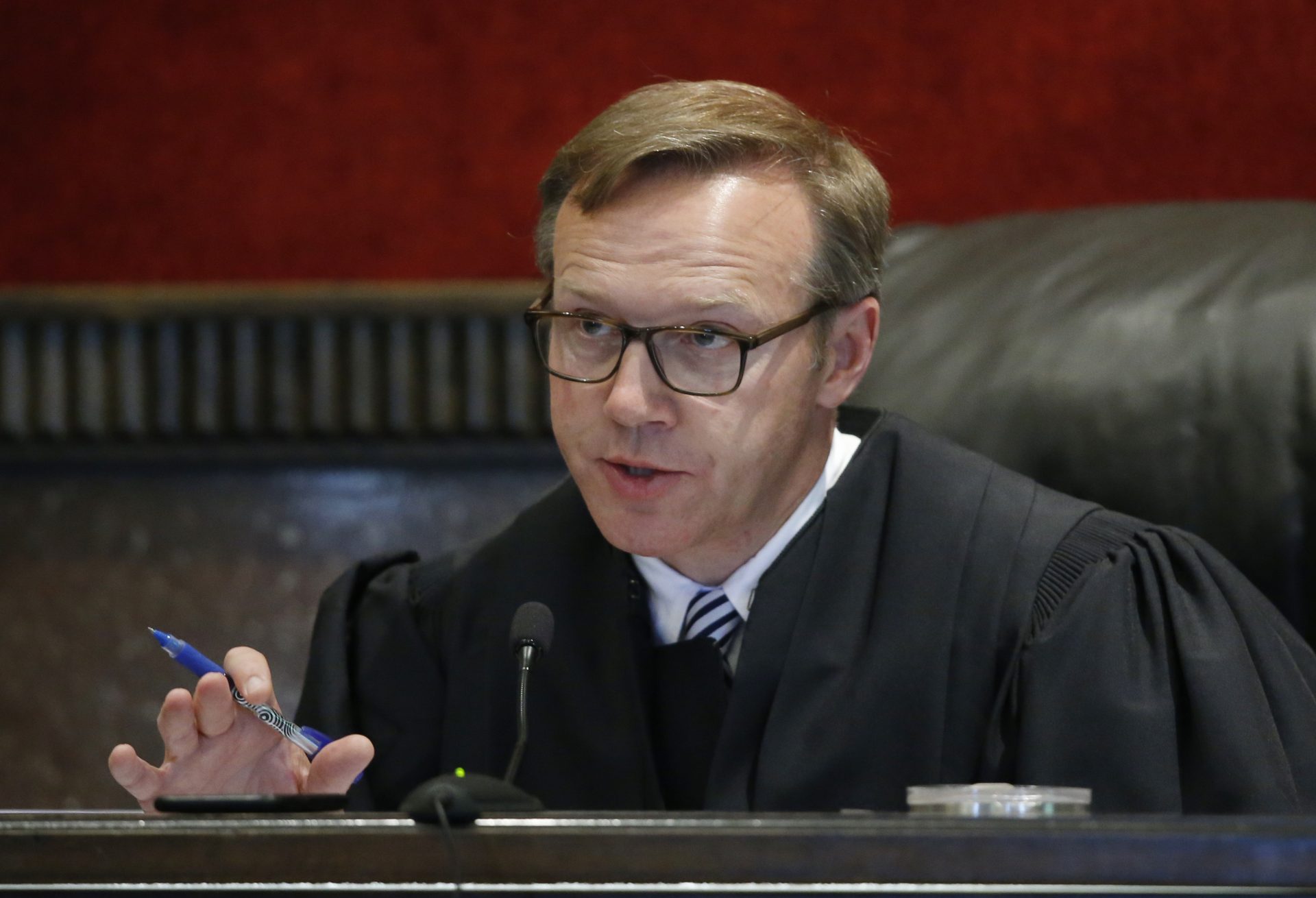 Judge Thad Balkman speaks during discussions of the settlement between the state of Oklahoma and Teva Pharmaceutical Industries Ltd. during Oklahoma’s trial against drugmakers blamed for contributing to the opioid crisis, Monday, June 10, 2019.

The first case in a flood of civil litigation against opioid drug manufacturers is in its third week in Oklahoma.

Johnson & Johnson is the sole defendant in the case. Two other companies — Teva Pharmaceuticals and Purdue Pharma — both settled with the state before the trial began.

Oklahoma’s lawyers say the company did more than push its own pills. Until 2016, the state says Johnson & Johnson profited from the prescription opioid crisis by cultivating a highly potent poppy in Tasmania. The narcotic refined from the plant was sold to other companies to make opioids. One of the customers was Purdue Pharma, the maker of Oxycontin, one of the most prescribed drugs and a leading driver of the epidemic.

This case has brought to light another aspect of the company’s business. Johnson & Johnson also produced the active ingredient for opioid treatment drugs including Naloxone, which is used to reverse overdoses.

He said Johnson & Johnson’s marketing of opioids, in general, was pervasive in the medical industry, beginning in the 1990s. He claims they downplayed opioids’ addiction risk, knowing that almost any opioid prescription would benefit the company’s bottom line.

“From every direction, we were hearing that if you’re an enlightened doctor in the know, that opioids are a gift from mother nature and should be used for almost any complaint of pain,” Kolodny said.

The state says those misleading sales tactics created a “public nuisance’’ which refers to actions that harm members of the public, including public health. 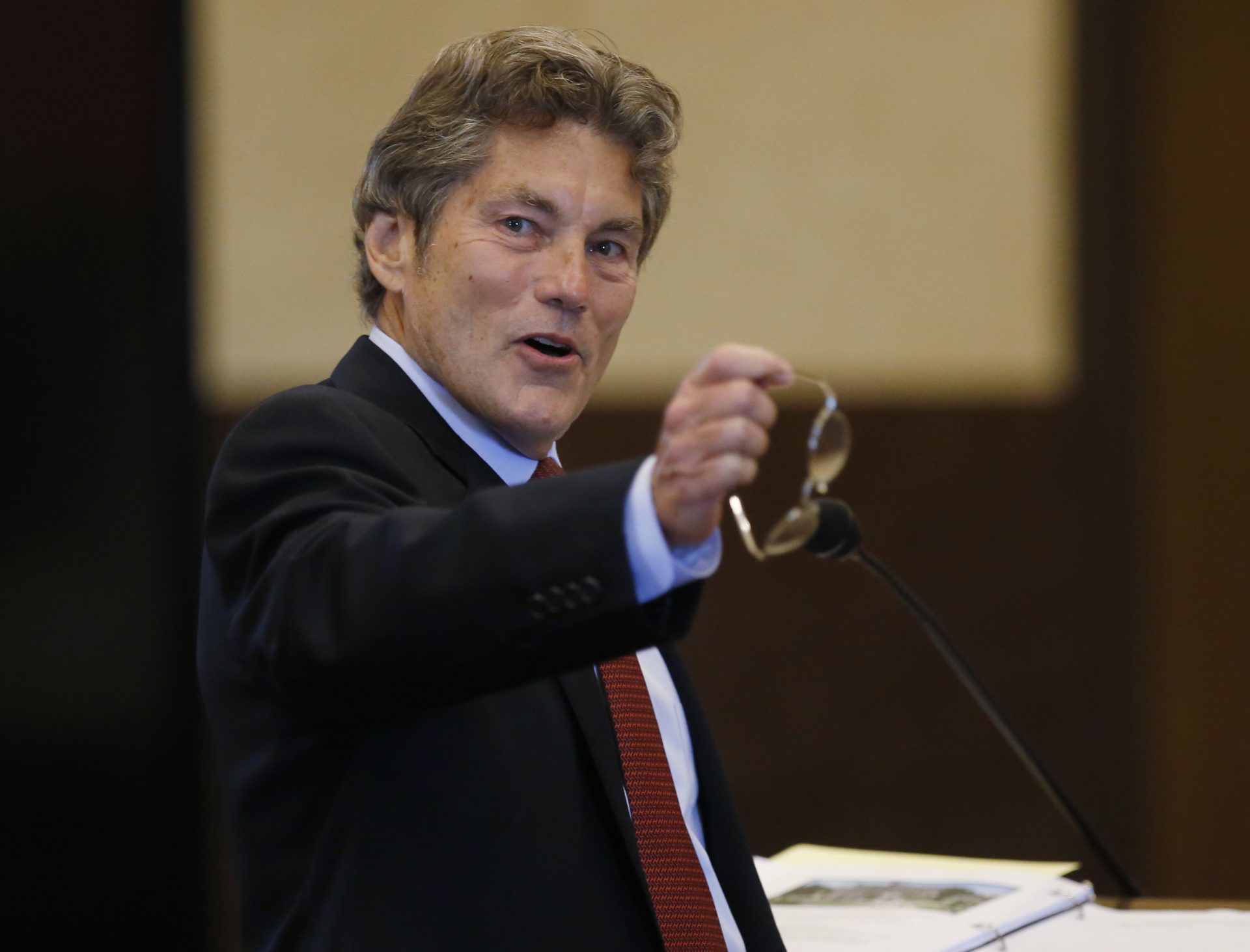 Defense attorney Larry Ottaway gestures as he speaks during opening arguments Tuesday, May 28, 2019, in Norman, Okla., as the nation’s first state trial against drugmakers blamed for contributing to the opioid crisis begins in Oklahoma.

“Janssen’s conduct was not a nuisance,” said Larry Ottaway, representing Johnson & Johnson and its subsidiary Janssen Pharmaceuticals. “They provided medically necessary medications … They were lawfully subscribed by doctors in the state of Oklahoma.”

Ottaway read from a Centers for Disease Control and Prevention report in his opening statement.

“States, as regulators of healthcare practice have the responsibility and authority to monitor and correct inappropriate and illegal prescribing,” he said.

Ottaway said the company’s goal was to help patients.

“Serious, chronic pain is a soul-stealing, life-robbing thief,” he said.

“His comments on the production of medical-grade pharmaceutical ingredients under the regulation and authorization of the DEA and FDA are offensive, sensationalist and baseless.”

Both sides agree that Oklahoma is experiencing an opioid crisis. About 6,100 Oklahomans died from overdoses from 2000 to 2017, and the state has one of the highest rates of babies born with neonatal abstinence syndrome.

But Richard Ausness, a law professor at the University of Kentucky who has been following the case, says the burden of proof is on the state.

“You gotta connect some dots. The fact that you have an opioid crisis is not necessarily caused by the promotional efforts of the drug companies, that’s, of course, the issue,” Ausness said. “If they can’t prove that, then they are going to lose.”

Initially, Hunter’s lawsuit included Purdue Pharma and Teva Pharmaceuticals. In March, Purdue Pharma settled with the state for $270 million. Soon after, Hunter dropped all but one of the civil claims, including fraud, against the remaining defendants.

Ausness says that decision could backfire and cost the state billions of dollars.

“[The state is] seeking money damages for the secondary losses that they incur by virtue of being the government, such as health and police protection and things of that sort. That’s a real stretch for public nuisance,” he said.

The bench trial — with a judge but no jury — is the first of its kind to play out in court.

Oklahoma’s case sets the stage for about 2,000 other civil lawsuits around the country trying to hold the opioid companies accountable.

Attorneys for the state still have one more week to present to Judge Thad Balkman, who will decide the case. After that, its Johnson & Johnson’s turn.