Anti-abortion advocates listen to speakers decry a proposed abortion trigger bill at the Oklahoma State Capitol Feb. 25, 2019. Instead, they rallied to outlaw abortion immediately, rather than waiting on the U.S. Supreme Court. 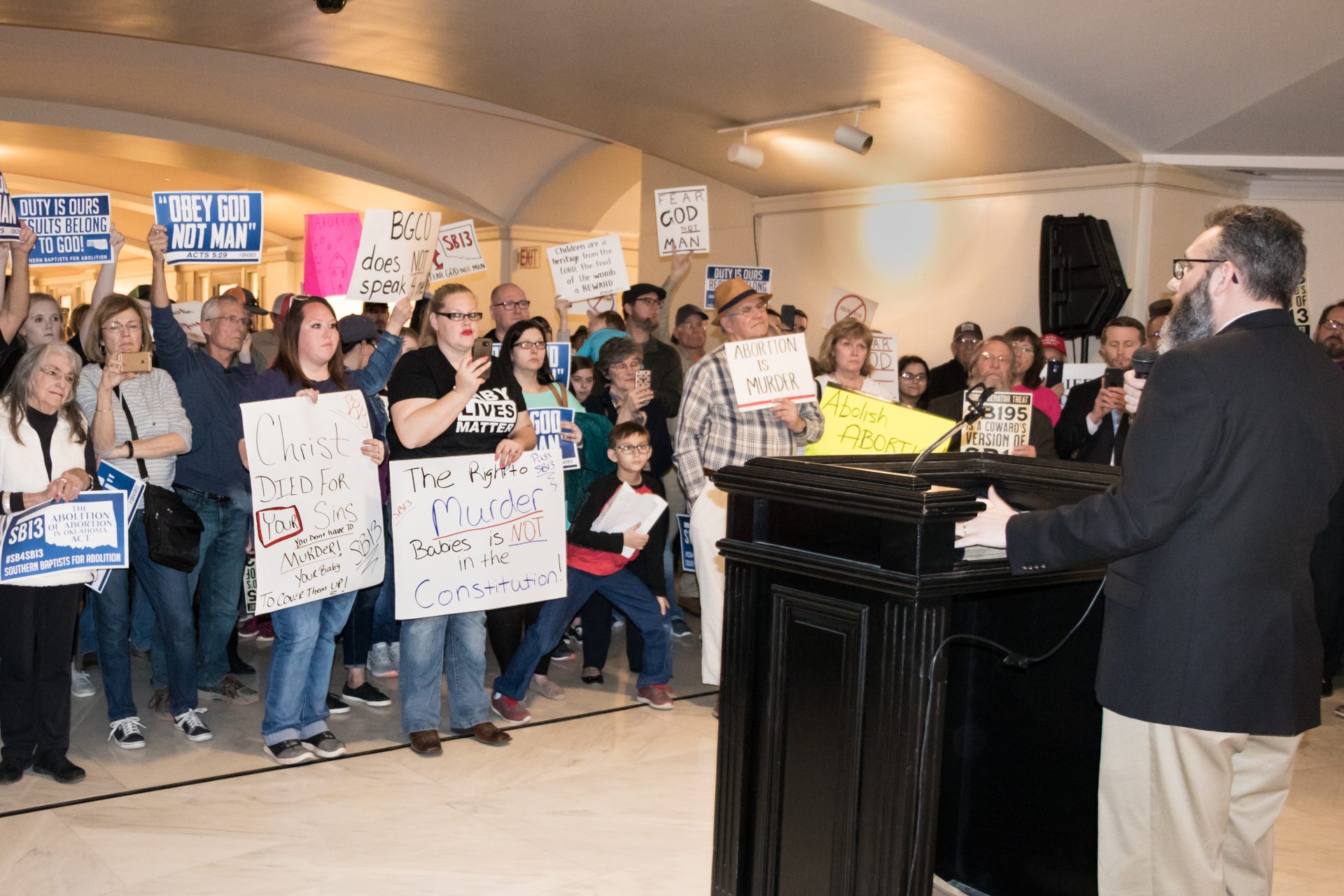 Anti-abortion advocates listen to speakers decry a proposed abortion trigger bill at the Oklahoma State Capitol Feb. 25, 2019. Instead, they rallied to outlaw abortion immediately, rather than waiting on the U.S. Supreme Court.

Energized by new conservatives on the U.S. Supreme Court, abortion opponents believe that the 1973 Roe v. Wade decision that legalized abortion in the U.S. could be overturned. If that happens, the regulation of abortion returns to the states. Some state legislatures led by liberal Democrats, such as New York, have decided to protect the right to an abortion.

In more conservative states, such as Oklahoma, anti-abortion lawmakers are rushing to make sure their state statutes do not ensure the right to an abortion.

“If Roe v. Wade ever gets overturned we won’t be prepared, that’s the nexus of this bill,” said Republican Greg Treat, who leads the Oklahoma Senate.

Treat’s legislation, modeled after existing laws in a handful of states, would “trigger” a state ban on abortion and make it a felony if Roe were overturned. Arkansas, Kentucky, Louisiana, Mississippi, North Dakota, and South Dakota, already have trigger laws on the books.

“Those bills are called trigger laws because the effective date is delayed until that court case comes down from the Supreme Court that rolls back abortion rights,” said Elizabeth Nash, who tracks state legislation for the Guttmacher Institute, a reproductive rights group.

Oklahoma has some of the strictest abortion laws in the nation, such as mandatory counseling and a 72-hour waiting period. However, the most conservative anti-abortion activists in the state want more immediate action.

“It [the trigger bill] does absolutely nothing. And you can ask them ‘what does that do for the kids that are being killed today, and this week and this year?’ Nothing,” Silk said.

Instead, he championed an alternative – an immediate abortion ban. Supporters of Silk’s bill thronged the state capitol in February. 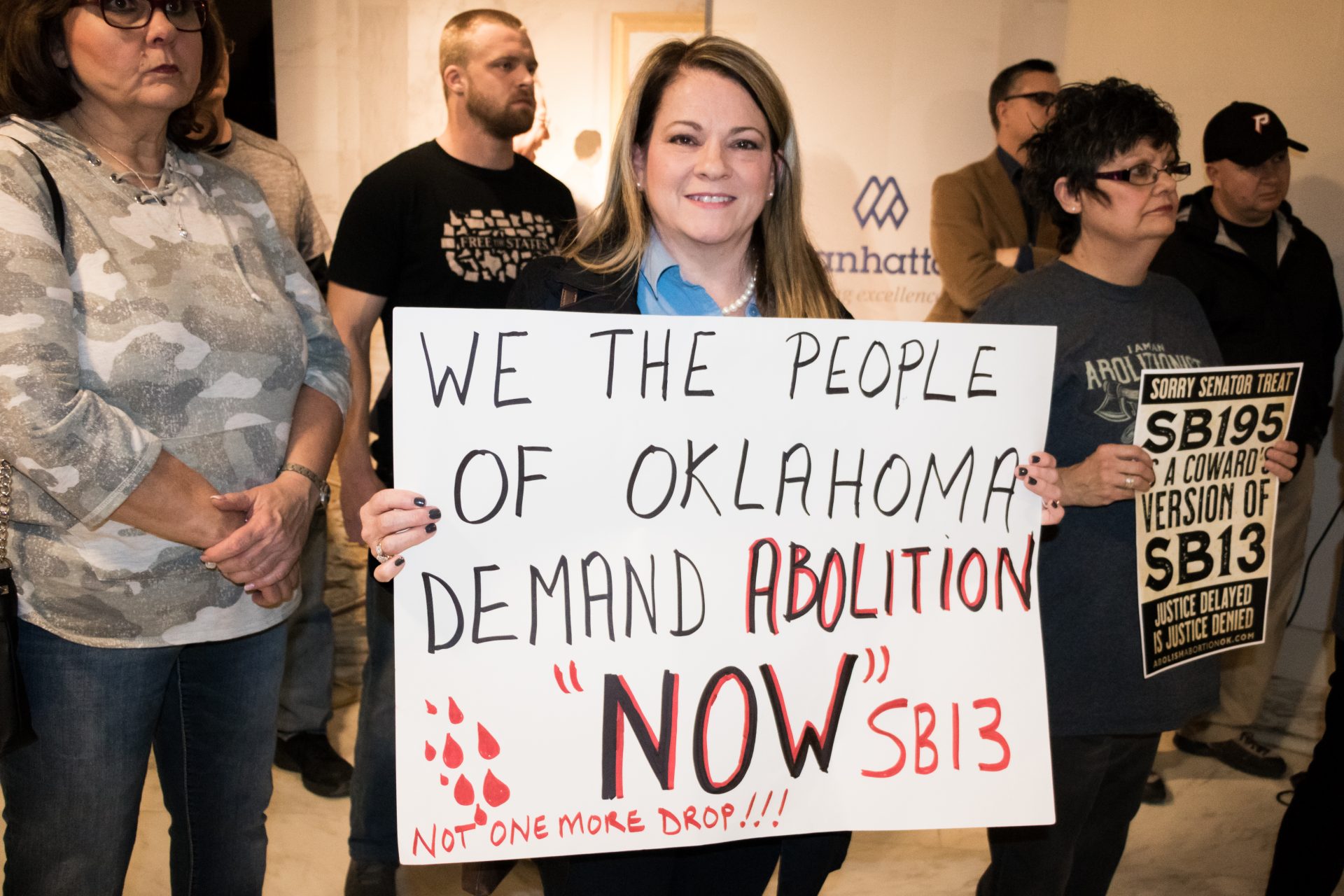 An anti-abortion protestor at the Oklahoma Capitol in support of Senator Joseph Silk’s bill to abolish abortion immediately.

The effort for an outright ban failed; but anti-abortion advocates continued to target Treat and other self-described “pro-life” Republicans with protests, billboards, and fliers, accusing them of not being anti-abortion enough.

At a health and human services committee hearing in February, Treat complained of his treatment.

“I’ve been called every name in the book these past few weeks, I’ve had my Christianity questioned, I’ve had a member of my own caucus hold a press conference and call me a hypocrite,” Treat said.

Now, he is trying something else — an amendment to the Oklahoma Constitution that would reinforce that nothing in state law “secures or protects” the right to abortion.

“We’ve seen this in Tennessee in West Virginia in Alabama, and now we’re seeing an effort in Oklahoma,” Nash said. “And really what this is about is setting the stage for adopting abortion bans or restrictions.”

Ryan Kiesel, Executive Director of the ACLU of Oklahoma said the organization is considering a legal challenge that might block the measure from appearing on the ballot.

“The question is whether the legislature can use a ballot question to make an entire subject matter of law immune from any future state constitutional challenges,” Kiesel said.

Treat has authored bills on abortion in the past that the state supreme court has thrown out, including a ballot measure seeking to abolish abortion.

For now, Oklahoma Republican lawmakers have hit the pause button on the constitutional amendment bill, though it will probably come up in the next legislative session. If it passes, the question could be put before voters as soon as 2020.