Oklahoma City residents ask questions at a town-hall meeting about a trio of proposals to close schools, consolidate operations and make other changes throughout the district. 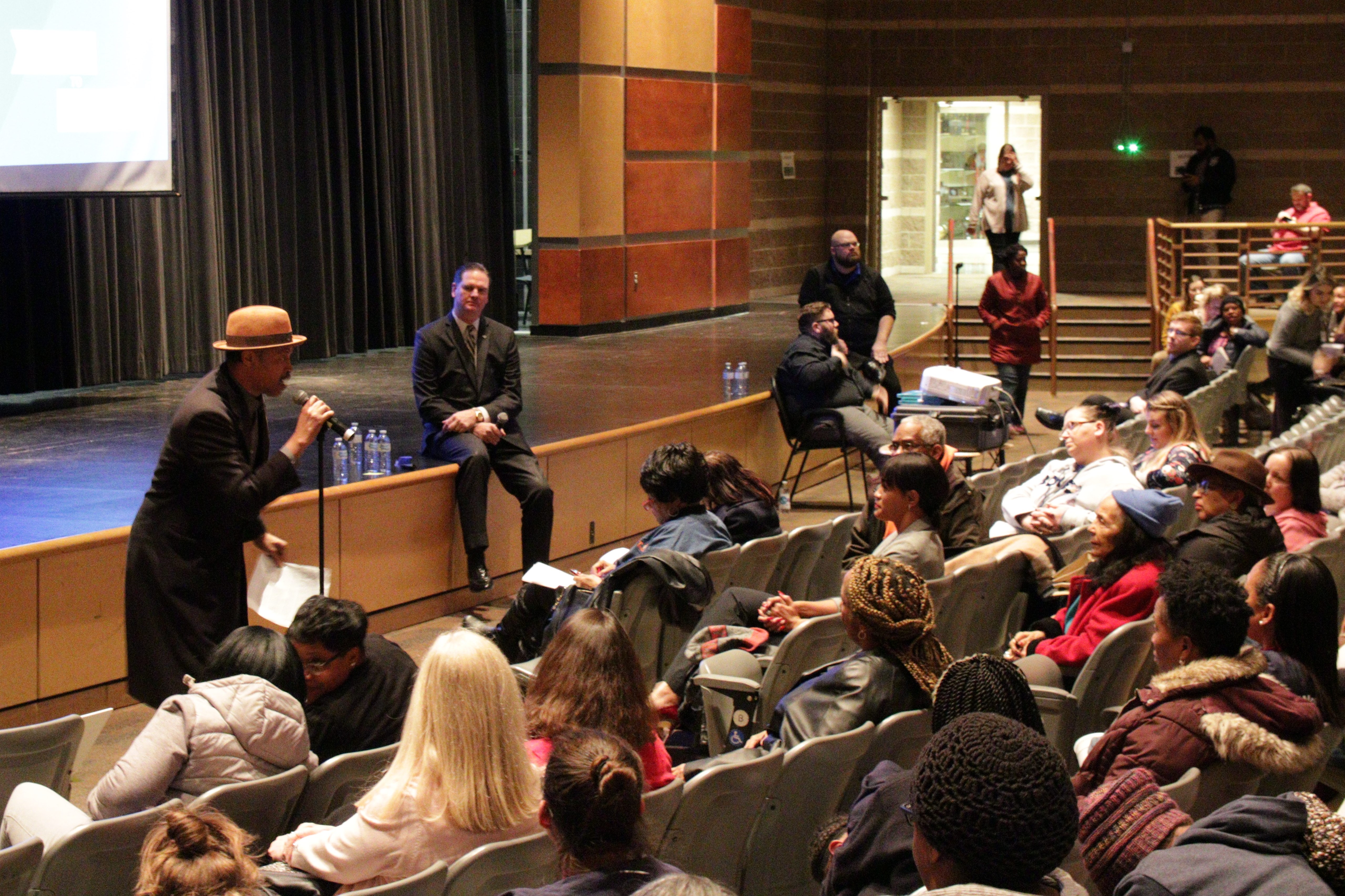 Oklahoma City residents ask questions at a town-hall meeting about a trio of proposals to close schools, consolidate operations and make other changes throughout the district.

The lunchroom is small, and overcrowding has forced administrators to add lunch periods to feed all the students. Today, the first group will eat at 10:30 a.m. and the last will finish at 1:30 p.m. — one hour before school lets out.

“An effect of us being overcrowded is we’re doing lunch almost all day long,” Frederick said.

The school was built to hold roughly 1,400 students, but last fall about 1,900 students enrolled.

The Oklahoma City Public School Board is considering plans would take some of the burden off of U.S. Grant by redistributing students to other schools in the district.

The plan would also close more than a dozen schools, streamline operations and save money.

Oklahoma City is growing, but student enrollment in district schools is on the decline.

The district was built to hold 60,000 students, but today it serves about 46,000. The distribution isn’t felt evenly, and some schools like U.S. Grant are overcrowded while other schools are operating at less than half capacity. District officials estimate they spend $2.4 million heating and cooling empty buildings each year.

Superintendent Sean McDaniel laid out a trio of possible fixes to a packed auditorium at Northeast High School last month. The three plans all consolidate schools but vary in how many schools would close — and how much money would be available for the remaining schools in the district.

McDaniel’s plans promise full-time art, music, and P.E. teachers in every elementary school, as well as more librarians, counselors and support staff. The superintendent said the plans would build more science labs, and provide smaller class sizes for kindergarten through sixth grade. The plans would also double the number of seats at high-performing application schools.

Another major change the plans do is reconfigure the grades that schools offer.

Most elementary schools will become pre-K through fourth grade. Middle schools will add fifth grade, and high schools will be a more traditional ninth through 12th. The only schools that wouldn’t follow the model are those in Spencer schools, which McDaniel said are to be treated as a separate district.

Many parents in the district are skeptical of the proposed changes.

Karena Simonis is a parent at F.D. Moon Elementary, which would remain open but would lose its fifth and sixth grades.

“The trade ups are, I think, great in theory —  we’ll have to see how they come about,” Simonis said.

Teleace White also has a child at F.D. Moon and a daughter who’s a junior at Northeast Academy. Under the plan, her daughter has a guaranteed spot at Classen School of Advanced Studies, a high-performing application school that would move its high school to the Northeast Academy building.

“I’m a product of Oklahoma City Public Schools and change sometimes is ineffective. They did this change, turnaround models or whatever, 10 to 15 years ago. I don’t see the benefit of it’s doing yet,” she said.

Simonis and White’s skepticism is based partly on the district’s revolving door of superintendents and poor student performance.

McDaniels is the 14th full-time or acting superintendent since 2000.

The district’s average graduation rate last year was 72 percent, 10 points lower than the statewide rate. Last year, less than a quarter of the district’s students scored proficient or higher on either a state math or reading test.

At U.S. Grant, Principal Greg Frederick sticks his head into a packed upper-level science class. The teacher tells him that there are 29 students in the room now and that her biggest class has 33 students. For Frederick, the ideal class-size has 25 students.

“Having less students overall in the building wouldn’t fix that problem,” he said. “That’s an issue with class sizes and not overcrowding of the school in general. We could go down to 1,100 students or even 1,000 next year and still have that kind of an issue.”

State funding is tied to the count of students at schools. With less money, U.S. Grant won’t be able to afford to hire more teachers and reduce overcrowded classrooms.

The Oklahoma City Public School Board will vote on McDaniel’s proposals on March 4. If a consolidation plan is approved, Oklahoma City students will start at their reconfigured schools in August.