Fifty-six percent of the flights from the Air Methods’ Pocola base bring patients across state lines for treatment at the nearest hospitals in Arkansas, or Arkansas patients headed to hospitals in Tulsa or Oklahoma City. 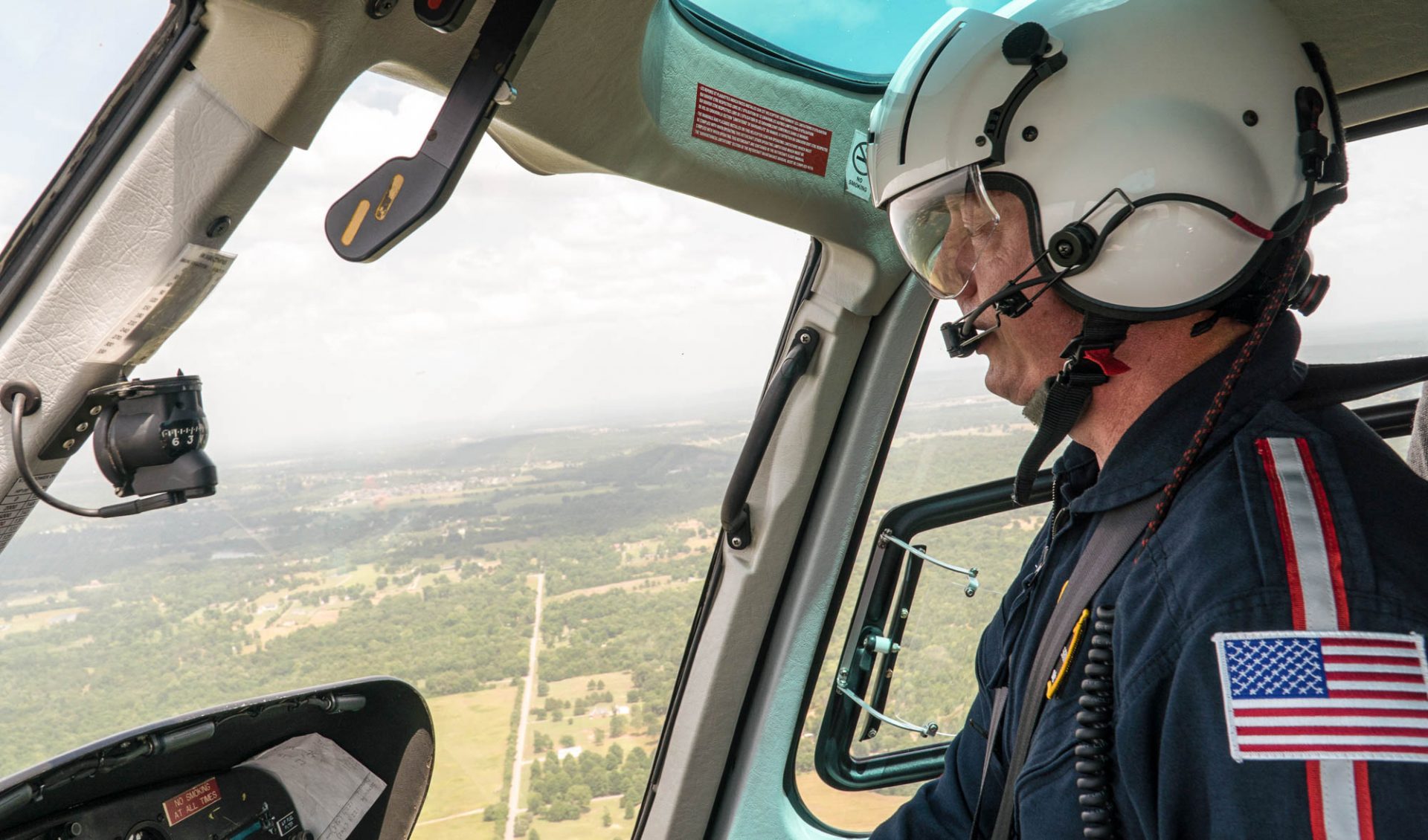 Pilot Chris Glascow is a 20 year Army veteran. Most of Air Methods’ pilots are ex-military.

The air medical field has grown tremendously since the 1980s. Air ambulances take patients to the nearest hospital, which often means crossing state lines. But a legal quirk means paying for a life-saving flight can lead to financial ruin. Congress is mulling a fix, but some air ambulance companies say it could have unintended consequences.


Pilot Chris Glascow flicks metal switches above his head and recites the wind direction and fuel-supply from the cockpit of an Air Methods helicopter on a pad near Pocola, Okla. The routine is a habit of a pre-flight rundown he picked up from 20 years flying Black Hawk helicopters in the Army.

He points to a small black screen that blinks on with what looks like green crosshairs in the middle.

“Probably within a minute or so, we’ll be in Arkansas,” Glascow said. “We’re right on the edge.”

It’s a familiar flight path. Fifty-six percent of the flights from the Air Methods’ Pocola base bring patients across state lines for treatment at the nearest hospitals in Arkansas, or Arkansas patients headed to hospitals in Tulsa or Oklahoma City. Hospitals specialize in certain fields, so the best care for a patient could be hours away.

Air Methods is the largest air ambulance company in the country. The outfit owns five other Oklahoma bases under Tulsa Life Flight brand it bought in 2009.

In under a minute, the Arkansas River slips underneath the shadow of the helicopter, and Mercy Hospital in Fort Smith comes into view. It’s one of the hospitals Air Methods owners are afraid could be inaccessible, if proposed changes in the latest Federal Aviation Administration Reauthorization Act are approved. 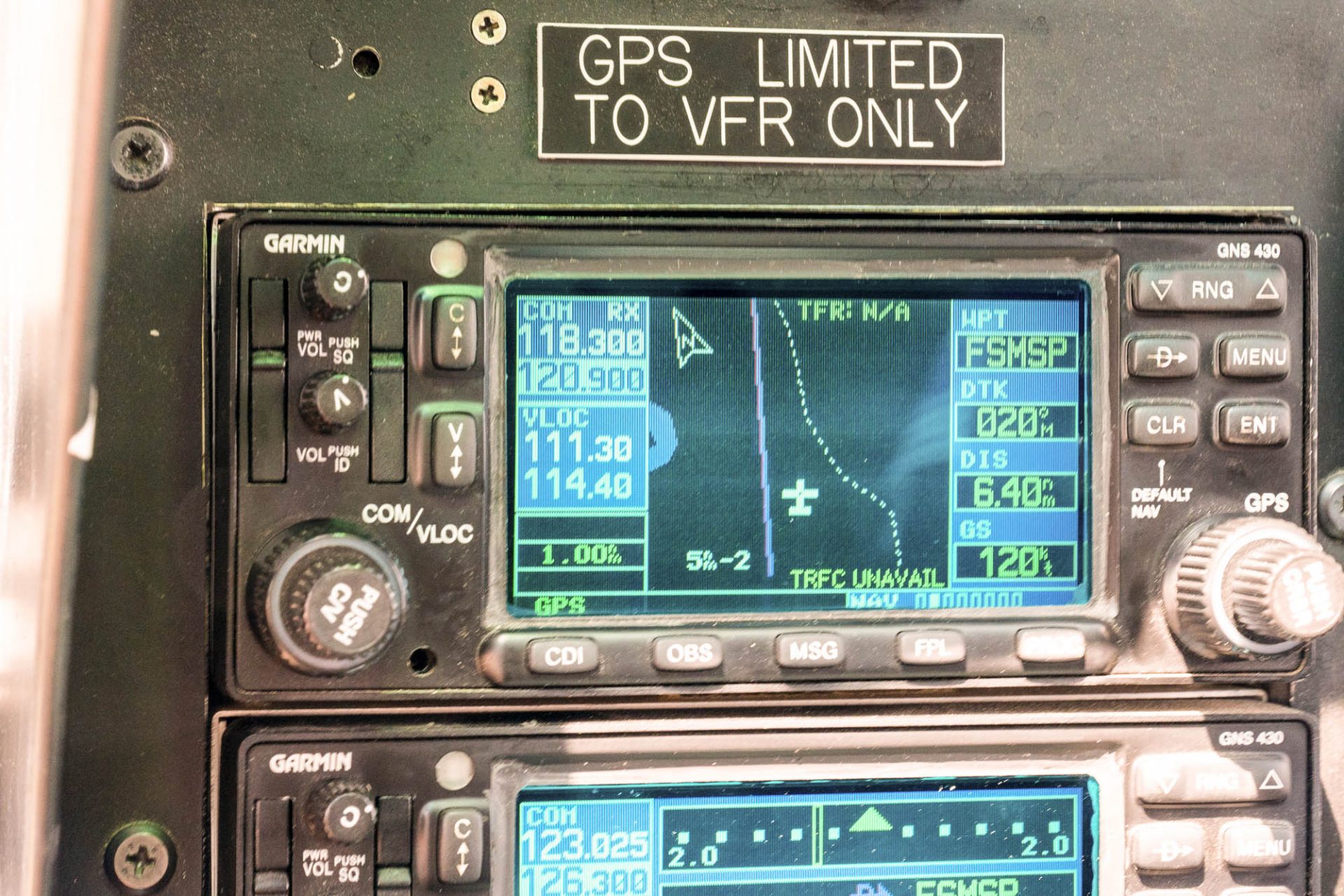 The helicopter’s GPS shows the Arkansas River on the right.

If I had been a patient, that minute-long flight could have cost thousands of dollars. That’s because air ambulances are exempt from most health care billing regulations. Federal law prevents states from restricting prices because air ambulance companies are considered air carriers like Southwest or American Airlines.

If an air ambulance is out of a patient’s insurance network, air ambulance companies are allowed to balance bill the remainder of the bill that the insurance company won’t cover — meaning the patient is on the hook for the undiscounted rack rate that the air carrier decides to charge.

“There’s nothing really they can turn to because of this regulatory blind spot essentially that air ambulances fall into,” said Erin Fuse Brown, a law professor at Georgia State University and expert in health care billing. “There’s nothing that would protect them, that would allow them to push back on the extraordinary charges that they are billed when they get home from the hospital.”

Fuse Brown said many states have tried to regulate air ambulances, but they’ve all lost in court.

“The federal Airline Deregulation Act broadly preempts any state effort to regulate the rates, or the prices or even the insurance requirements, and that makes air ambulances, sort of immune from a lot of these state attempts to get air ambulance coverage more broadly accessible to people,” she said.

‘Borders in the sky’

Fuse Brown said the FAA reauthorization bill recently passed by the U.S. House of Representatives includes some important consumer protections. Right now, patients get one big bill for services. The legislation under consideration would require itemized bills that separate out transportation and medical charges. It would also allow states to regulate the medical side of air ambulance billing, which has people like Doug Flanders, director of government affairs for Air Methods, worried.

“What some people are calling ‘just a little provision’ could have large impacts to patients, not just in Pocola, Oklahoma, but all over the country,” he said. 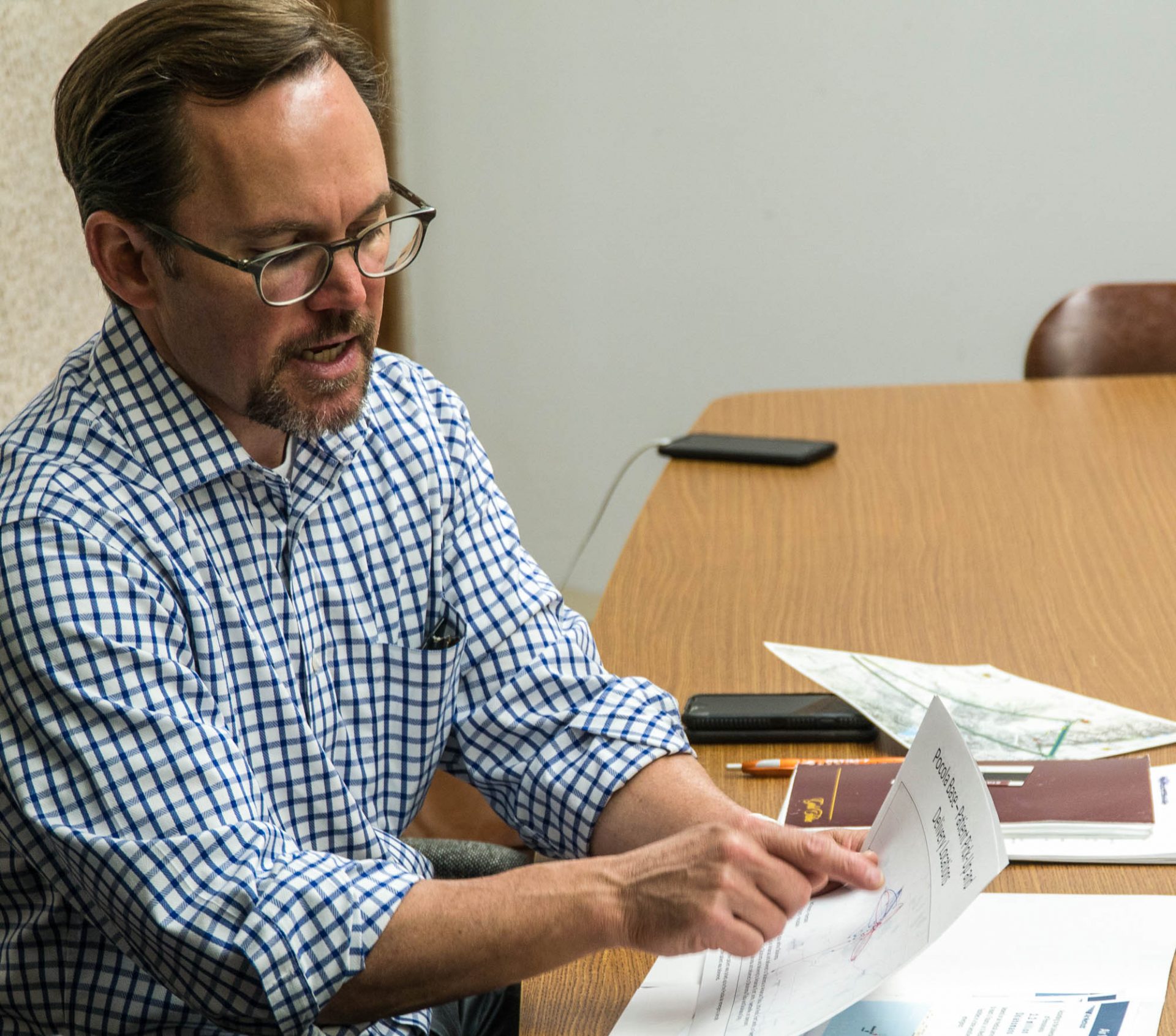 Doug Flanders, director of government affairs for Air Methods at their base in Pocola, Okla. explaining where the helicopters fly to.

Breaking out aviation costs from medical costs for a bill is more complicated than people think, Flanders said.

“All of our helicopters are integrated. Our training for clinicians is integrated,” he said. “ How is it, when you’re flying from Pocola to Arkansas, will we know which one is aviation and which one is medical?  Because it’s all integrated together, that’s how the system is.”

Flanders said giving states authority to regulate the medical side of air ambulance service could lead to an inconsistent patchwork of regulations.

“What if the state of Arkansas decides that it will only accept Arkansas helicopters because now they have the authority to be able to regulate that medical cost? Those are life and death decisions that borders should not make a difference,” he said. “his kind of legislation that creates borders in the sky would do that.”

Not everyone in the industry agrees, however.

“I cannot imagine that a state would do anything to inhibit the ability of a physician to send a patient to the most appropriate medical facility,” said Greg Hildenbrand, executive director of Life Star of Kansas, a non-profit air ambulance service and board member of the Association of Critical Care Transport. With the Senate now considering its own version of the FAA Reauthorization Act, the organization is urging lawmakers to give states more oversight, and retain the House language.

“Ground services do this every day,” he said. “I don’t see that that’s going to create a problem in our ability to care for patients appropriately or take them where they need to go.” 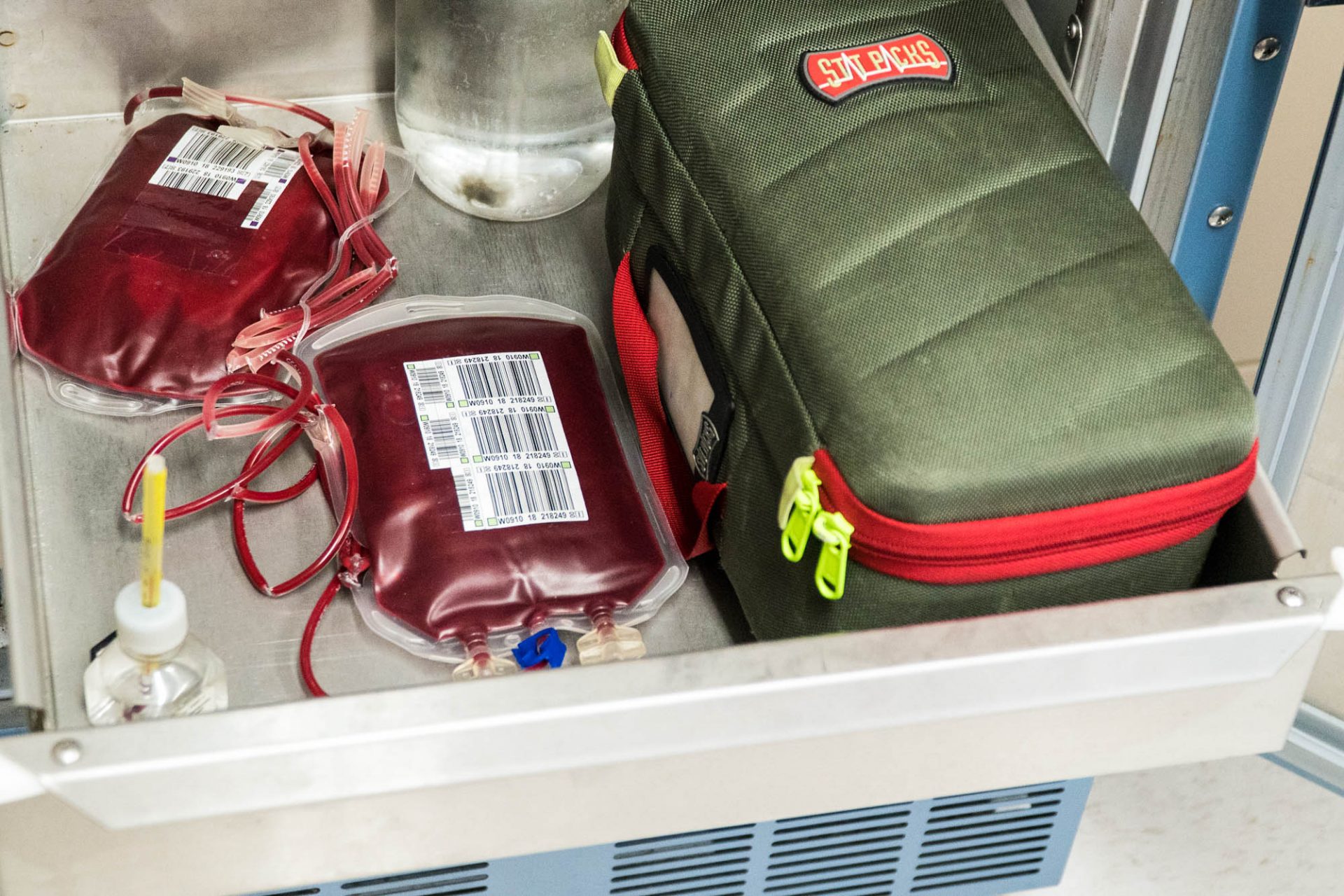 Blood and other emergency medications are kept in a refrigerator at the Pocola Okla. base in case a patient needs a transfusion.

Air ambulances were in their infancy when air travel was deregulated in the 1970s. Since then, the industry has had little oversight on where bases are located. That’s lead to vast deserts of coverage and other areas, like on the Oklahoma border, with a saturated market that has multiple carriers.

With no cap on pricing and high fixed costs like helicopters and trained personnel ready to fly at a moments notice, Hildenbrand says increased competition has driven prices up, instead of down.

The rise in price is dramatic. A Government Accountability report found that between 2007 and 2016, Air Methods’ average helicopter transport costs increased from $13,000 to $49,800. Since it owns two-thirds of the air ambulances in the country, the company’s pricing greatly influences the market. 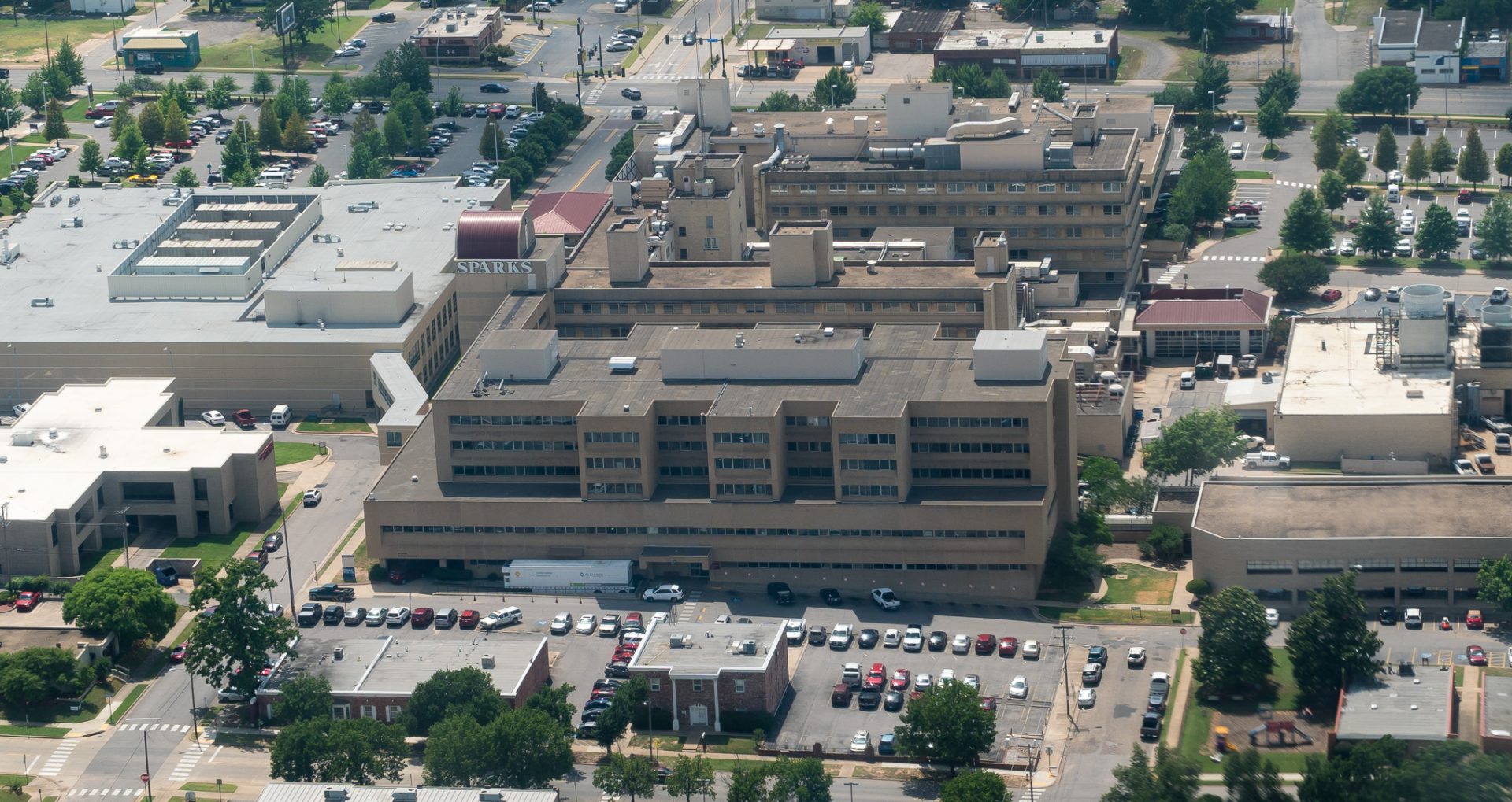 A view of Sparks Regional Medical Center in Fort Smith, Ark. from the helicopter. It’s one of the hospitals that Air Methods says they may not be able to fly to if states regulate air ambulances.

Because air ambulance providers accept much lower reimbursement rates from Medicare and Medicaid patients — and may not receive any payment at all from uninsured patients — the impact of these rate hikes has fallen almost entirely on private healthcare insurers and their members.

Hildenbrand, a 20-twenty year veteran of the industry, said insurance companies are fed up.

“I think we’ve reached a tipping point in the industry where insurance companies are saying, ‘No, we’re not going to continue to pay these rates,’ and so then patients get balance billed $40,000 or something after their insurance has paid. I don’t think it’s a sustainable system,” he said.

As billed charges have soared, more insurers have started limiting their reimbursements to air medical providers. Air Methods has responded by hiring ‘patient advocates’ who go through the appeals process with the insurance company. Ultimately, if the insurance company won’t pay, the patient is on the hook.

The House version of the FAA reauthorization bill would also set up a council of industry representatives, lead by the Department of Transportation, which oversees air ambulances. The group would include air ambulance providers and insurance company representatives, among others, and would write and reevaluate consumer protections. The legislation also establishes a complaint hotline for patients, similar to one available for commercial airline passengers.

Fuse Brown with Georgia State University thinks it’s a step in the right direction, but said the regulatory council might not go far enough.

Congressional Republicans and Democrats are backing other bills to give consumers more protections in the event air medical reforms are stripped from the FAA legislation. Whether these efforts lead to lower air ambulance costs for patients is up in the air.