Preschool teacher Basset speaks with a student in an outdoor area at St. Charles Borromeo Catholic School in Oklahoma City.

One Idea To Boost Science Education In Oklahoma: Move Classrooms Outside And Away From Textbooks 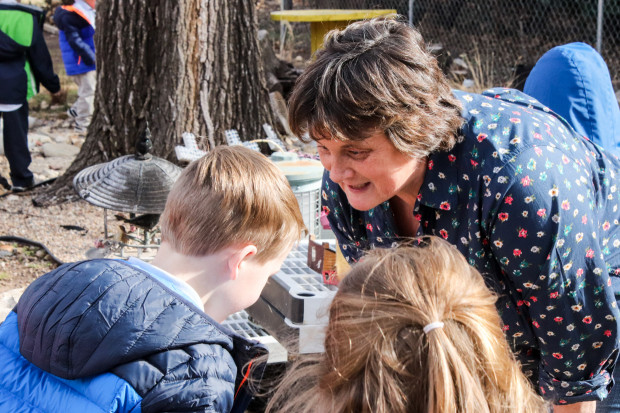 Preschool teacher Basset speaks with a student in an outdoor area at St. Charles Borromeo Catholic School in Oklahoma City.

The state’s market for engineering and technology jobs is growing, but the test scores of Oklahoma students lag behind national averages on science and math test scores. Researchers say one way to fix this gap is training science educators to do more than teach the facts — and to think beyond the textbook.

Les Basset wakes her preschoolers from a nap inside a colorful classroom at St. Charles Borromeo Catholic School that has added floors and alphabet posters on the walls and tells them to put on their shoes. Basset leads the kids outside the Oklahoma City school building into a garden area, where one of her students finds a spiderweb.

This is the students’ classroom for the day.

Basset’s lesson plan includes showing students how animals camouflage themselves in nature by giving them some plastic toy animals and letting them hide the animals in the garden. Basset says ditching the textbook and going outside has significantly improved her students’ science learning.

“Their assignments take on a brand new life,” Basset said. “When they had to do the assignments afterward about butterflies and caterpillars and the life cycle, they could not wait because of what they had seen with their own eyes.”

Few educators in Oklahoma, however, are trained to use such teaching methods.

A classroom without walls

Basset’s experience is backed up by new research. Vicki Jackson and Beth Allan, professors at the University of Central Oklahoma, were recently awarded a grant from the National Science Foundation to investigate the best ways to prepare and train science teachers. Allan, who teaches science education, said she sees a divide in the way science is taught and the way students actually learn science.

“We’re talking about ways that we can change our content courses to better meet the needs of our candidate students for elementary education,” Allan said.

Jackson, who teaches ecology at the university, found that taking students outside helps get them interested in science. “Interacting with nature and interacting with wildlife is incredibly important to my background,” she said.

Science education is an important issue in Oklahoma because the state is on track to have twice as many openings for science and technology careers than it has people to fill those jobs.

For students to be considered “college ready,” they have to score at least a 26 in the science and math portion of the ACT test. Only 11 percent of Oklahoma students met that standard in 2017, compared to the national average of 21 percent, ACT results suggest.

Jackson and Allan organized a conference in December 2017 to discuss science education in Oklahoma.

Shauna Votta, a UCO graduate student and one of many future educators who attended the conference, said she’s frustrated by what she’s learning in her college classes. One of the main problems, she said, is her science education courses aren’t that different from her other education classes.

“We want our pre-service teachers, like myself, to be able to have the tools necessary for our students,” she said.

Votta said she feels like she’s not learning the best ways to get kids excited about science.

“We’re just learning, as students, regurgitation of memorization of facts,” she said. “It’s just missing the mark on how to communicate and strive for the processes to our students of tomorrow.”

At the conference, educators and curriculum providers spoke about the issues they see in their classroom, including a lack of funding and a lack of information about standards.

Jackson and Allan are still analyzing their research, but they’re already using their findings to change how future educators approach science. They’re starting with their own university and trying to change the way teachers are prepared.

Megan Cannon, director of science and engineering education at the State Department of Education, said she’s eager to change the way science is taught in Oklahoma.

“I think we’re at a place where we have a lot of people that are motivated to move forward with resources that are going to benefit the students of Oklahoma,” she said.

Les Basset, the preschool teacher at St. Charles Borromeo Catholic School, said she has noticed an increase in enthusiasm for science in her classroom. In addition to teaching outdoors, she’s encouraging her students to work hands-on and ask questions about the world around them.

“One of our dreams is that these kids will pursue this later on in life,” Basset said. “We need people to get other people outside and taking care of the earth.”