Oklahoma has the second-highest uninsured rate in the nation — a major financial strain on rural hospitals. This billboard advertises a hospital in Cordell, Oklahoma. 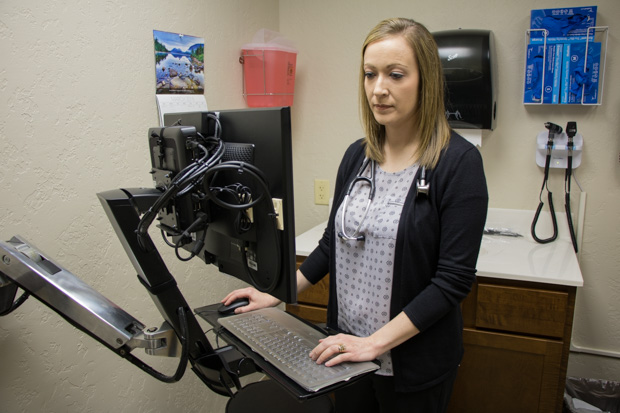 It’s hard to get basic health care like shots and x-rays in rural Oklahoma. The federal government considers all but one of the state’s 77 counties to have a primary care shortage. The problem is driving a legislative effort to allow highly educated nurses to fill that gap — but doctors and nurse practitioners are butting heads on who is qualified to help.

Lindsi Walker sits behind a glossy wooden desk at Cordell Memorial, a hospital on Oklahoma’s western plains. She’s surrounded by pictures of her family — a stethoscope hangs around her neck.

She was hired in February after hospital administrators tried for two and half years to attract a new primary care physician to the small, rural city. But she’s not a doctor – she’s a nurse practitioner – a highly qualified nurse trained to treat certain medical conditions.

“I’m family practice, so we see from birth to death and everything in between,” Walker said. “We come in, we have a full schedule of patients that range in a variety of problems from acute illnesses, to chronic illnesses. A lot of chronic disease — diabetes, hypertension, heart disease.”

Oklahoma is one of 11 states where nurse practitioners like Walker have to have a contract with a doctor in order to diagnose, treat patients and prescribe certain drugs. The idea is that a nurse practitioner can consult with the doctor when they need to, or in case of emergency. On paper, doctors in these agreements are known as supervising physicians, but Walker says that description is misleading.

“There are people that I see as patients that say, we don’t even know, we’ve never even met who your supervising physician is,” she said. “They don’t see them. They don’t dictate in anything in how we do our jobs.”

In independent clinics, nurse practitioners often pay thousands of dollars every month for clinical oversight from physicians – who may not be on site –  a requirement many nurses and clinic owners say amounts to little more than red tape.

Cordell Memorial CEO Landon Hise agrees. Right now, Oklahoma physicians can only supervise two nurse practitioners at once. And since he can’t get an additional physician to come to Cordell, the hospital is stuck in limbo.

“We have one doctor, two nurse practitioners, so at the moment we are maxed out. We cannot have any other providers unless we recruited another physician,” Hise said.

Without another physician, Hise can’t hire more nurse practitioners — unless state law is changed to give them more authority to care for patients. This scope of practice debate — basically, who gets to order and interpret tests like x-rays and prescribe some medicines — has been raging. 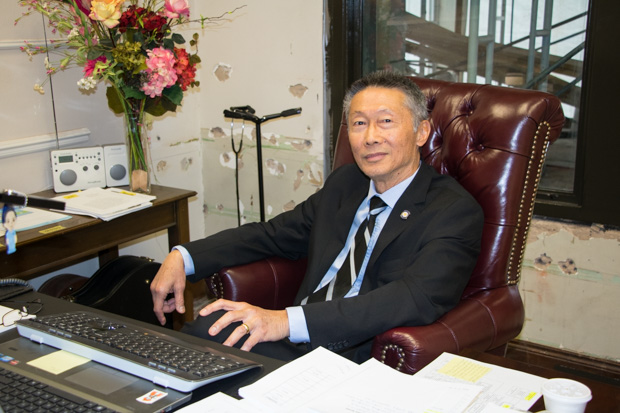 State Sen. Ervin Yen, R-Oklahoma City, is chair of the Senate Health and Human Services committee and a cardiac anesthesiologist.

For many physicians, the difference boils down to education.

“The training of a nurse is in nursing. The training of a physician is in medicine,” said State Sen. Ervin Yen, R-Oklahoma City, chair of the Senate Health and Human Services committee. Yen is also a cardiac anesthesiologist. He says physicians have at least 10 years of medical education. Nurse practitioners only go through six to eight years of training.

There have been tensions between doctors and nurses since the days of Florence Nightingale, but the strain increased in the 1950s. Scientific discoveries pushed physicians away from primary care and into increasingly specialized and more lucrative fields like cosmetic surgery.

Meanwhile, nurse practitioners have become more professional with graduate degrees, and they want to fill that primary care gap.

A measure to do that in Oklahoma, House Bill 1013 was filed last year. Right now it’s stalled in the Senate Health and Human Services committee Senator Yen chairs. A similar bill is in the works. Bu Yen doesn’t think legislation granting nurse practitioners more authority is the answer. 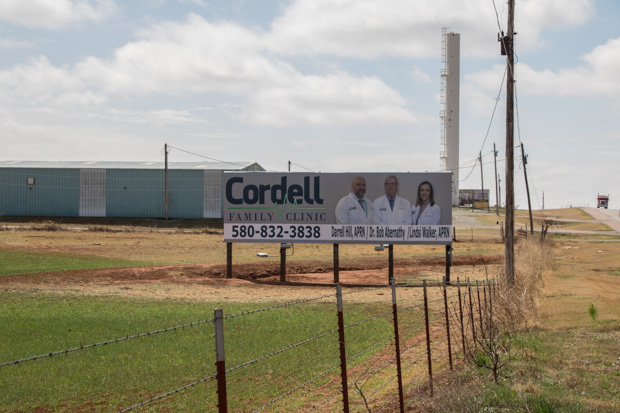 A billboard outside advertises the services of the hospital’s only doctor and two nurse practitioners.

Many states have granted nurse practitioners autonomy, including Colorado in 2010. But eight years later, Mark Deutchman associate dean of rural health at the University of Colorado School of Medicine says the change hasn’t fixed that state’s rural health care problem.

“None of our counties that are designated as primary care health professional shortage areas have ceased being so in the time interval since this law was passed,” he said.

Deutchman says expanding on-the-job training programs to attract and prepare medical students who are interested in practicing in rural health could help.

This isn’t a new problem. In the 1970s Oklahoma created the Physician Manpower Training Commission, which provides scholarships and loan repayment to nurses and doctors to incentivize them to practice in rural areas. Right now, it has 57 doctors in underserved parts of the state, but with continued cuts to state appropriations and the recent loss of federal funds, the commission can only afford to help a limited number of providers.

“A huge statistic, which shocks me every time I say it, is that we have one-third of our practicing physicians in Oklahoma that are over 60 years old,” says Richard Evans, head of the Physician Manpower Training Commission.

In his experience, quality of rural life in rural areas can be a major stumbling block.

“We’re trying to get a doc to enroll his kids in school out there, and hopefully live there for his career. And to try to get them to go to a school district that may be only going to school four days a week is a very difficult thing to do,” Evans said.

Cordell hospital CEO Landon Hise has had similar experiences. He says getting a physician to stay for decades in a rural area is a tough sell. One major reason – being a country doctor means you’re always on call.

“Here, in rural Oklahoma, you’re going to practice in your clinic during the week, you’ll take an ER call at night, you’re going to get stopped in the grocery store, people asking about their health, you go to church and it’s going to happen there — so it’s just a completely different lifestyle out here,” Hise said.

In the meantime, Hise is making contingency plans. The single doctor on staff in Cordell wants to retire. Hise is recruiting medical students — and hoping he can convince future doctors to start their career in western Oklahoma.