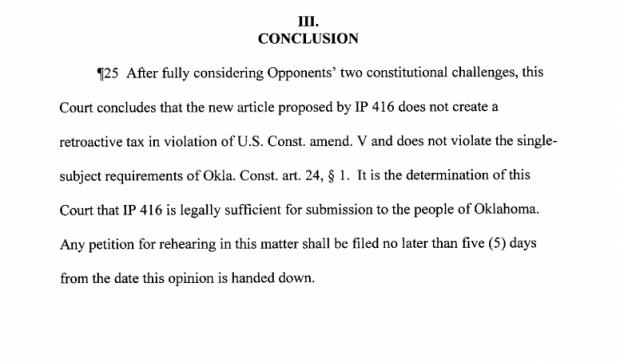 The Oklahoma Supreme Court on Monday ruled a proposed state question that would ask voters to approve tax hikes on oil and gas production to help fund education can move forward.

The proposed State Question 795 was written by a group called Restore Oklahoma Now, which is led by a former president of the OIPA. It would ask voters to end discounts on many wells and impose an across-the-board 7 percent tax on oil and gas production to fund teacher raises and early childhood education.

Oil companies and a major energy industry organization, the Oklahoma Independent Petroleum Association, filed lawsuits in January to block the proposed SQ 795, which they argued was misleading, incomplete, biased and too broad. They also argued it created a retroactive tax.

Oklahoma’s high court disagreed. In a 7-0 decision with one justice recused, the court ruled against each of those arguments and said the group backing State Question 795 could move ahead. Once it starts, Restore Oklahoma Now has 90 days to collect more than 123,000 signatures before it appears on a ballot.

The OIPA says the measure would hurt the oil industry and is preparing to make its argument directly to voters should SQ 795 appear on a ballot, the association’s A.J. Ferate tells The Oklahoman’s Jack Money:

“I have no doubt we will be prepared to share the issues and concerns with the voters,” he said. “Oklahomans generally don’t like tax increases, and I think this will be a story that’s pretty receptive to them.”

“Should this measure make it to the ballot, we will educate the public on the consequences of passing such an initiative, including the job losses it will cause in the energy sector,” Warmington said. “We believe teachers deserve salary increases and schools deserve adequate funding, but raising the gross production tax yet again is not a long-term solution,” he said. “We will continue to work with our state leaders and educators to find a sustainable answer to this problem.”