Fallin and DAs Champion Criminal Justice Legislation, But Reform Advocates Are Asking What The Bills Do 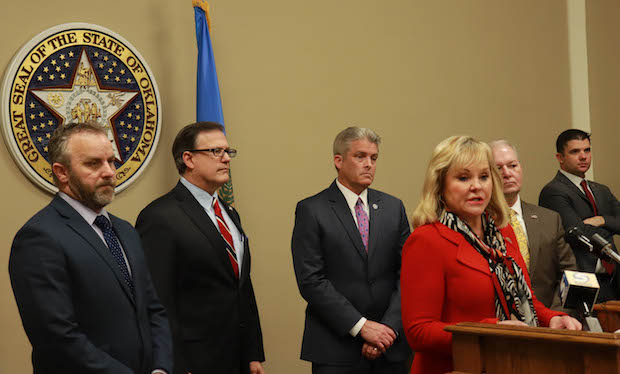 One criminal justice reform advocacy group is criticizing the timing of the announcement because the bills’ language still hasn’t been made public.

Five of the six bills were introduced during the 2017 legislative session, but DAs were afraid the measures would hurt public safety. Oklahoma County District Attorney David Prater says lawmakers worked with DAs to make changes.

Prater says one big concern was how proposed legislation would classify “nonviolent” offenders and determine their eligibility for early release. He and other DAs wanted to make sure “there truly is a real evaluation and understanding of what these offenders are there for.”

Oklahomans for Criminal Justice Reform, an independent group, said depending on its language, the compromise legislation may only slow prison growth and not reduce the overall population. The group also pointed out lawmakers hadn’t projected how many prison beds the legislation would empty.

The group plans to announce criminal justice reforms it supports later this week.