A tanker truck at an oil and gas production site in southeastern Oklahoma. 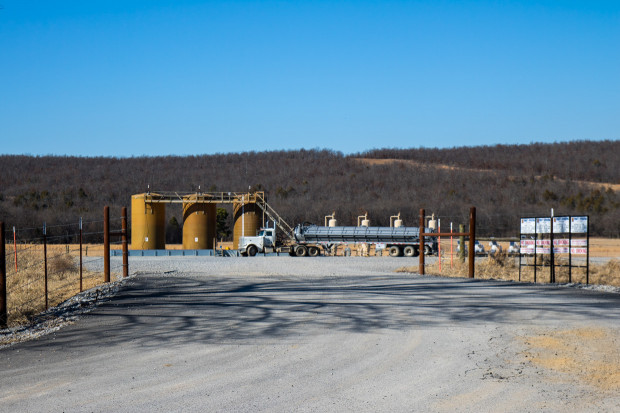 A tanker truck at an oil and gas production site in southeastern Oklahoma.

Oklahoma experienced a dramatic drop in earthquakes in 2017 — a decline likely due, in part, to regulations limiting activity at oil-field disposal wells, scientists and experts say. New research suggests those regulations might be reducing some quakes more than others.

It’s been two years since state oil and gas regulators adopted a broad regional plan that limits the amount of wastewater pumped into disposal wells in quake-prone areas. The good news: It appears to be working. After peaking in 2015, earthquakes became a lot less frequent.

The troubling news: The next year, Oklahoma had a pair of strong earthquakes, including the largest ever recorded, the 5.8-magnitude Pawnee quake.

“The spatial relationship with the small magnitude earthquakes is being affected by the volume reductions, but not necessarily the large magnitude earthquakes,” says Ryan Pollyea, an assistant professor at Virginia Tech University who studied this disparity in a January paper published in the journal Geology.

Pollyea’s paper suggests pressure on smaller faults tapers off faster than pressure on larger faults — the ones that produce stronger shaking when they slip. The research also linked wastewater disposal to earthquake activity up to 75 miles away. That finding could mean a good practice for limiting larger earthquakes could be much larger volume limits in a lot more oil fields.

Oklahoma earthquakes also appear to be concentrated at certain depths. The injection of wastewater into crystalline “basement” rock has long been considered a risk factor for triggering shaking and is disallowed in permits issued to disposal wells operators.

In a separate paper published in the journal Science, a different team of researchers found that limiting the depth of injection wells might also reduce the frequency of earthquakes.