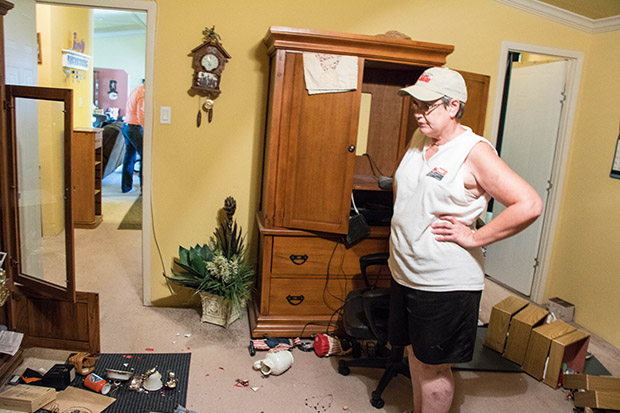 The U.S. Geological Survey is upgrading the strength of an earthquake that shook the state on Sept. 3 to 5.8 magnitude. That change makes the Labor Day weekend temblor the most powerful earthquake ever recorded in Oklahoma. The quake is the latest in a seismic surge researchers say has largely been fueled by the oil industry practice of pumping waste fluid into underground disposal wells.

Like many Oklahomans, Sherri Laird was in bed when the earthquake hit.

“My husband and I had to hold onto the bedposts it was so bad,” she says.

Instead of cooking a bunch of food and watching the Oklahoma State University football game with her family, Laird spent her Saturday sweeping up shards of glass and surveying damage, including broken bottles and a cracked chimney. Down the road, Laird’s neighbors rushed to fix a sewer line that sheared off their mobile home during the shaking.

Laird — flanked by two granddaughters eager to share stories of falling televisions, flying deer head hunting trophies and quake-related disarray — walks through her kitchen and points to an antique clock.

“The clock hasn’t worked for years,” she says. “It’s working. Is that weird? We just looked up there and it’s going.”

One of her granddaughters chimes in: “It probably needed a little shake, grandma.”

“I guess it did,” Laird says with a nervous laugh.

Adding considerable uneasiness to Laird’s morning were relentless aftershocks, which rumbled throughout our interview. One startling tremor blasted the house, triggering a loud crash from a kitchen cabinet.

“Oh, there went another one,” Laird gasped. “Oh my gosh.” 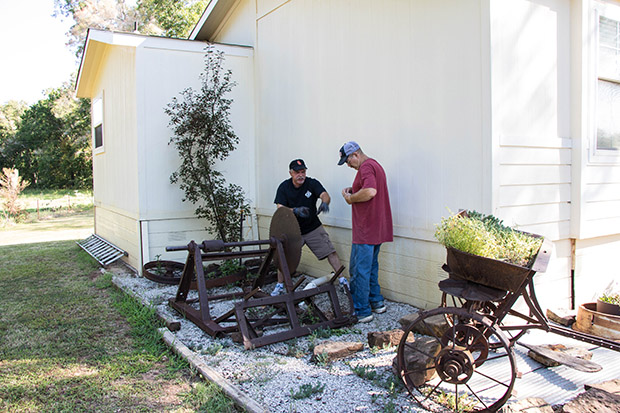 Official assessments are underway, but one injury was reported after the Sept. 3 earthquake. At least 15 homes and nine buildings sustained damage near the city of Pawnee, as did numerous buildings on the OSU campus in Stillwater, says Keli Cain with the Oklahoma Department of Emergency Management.

In a field near Pawnee, Nate Stevens, a Ph.D. student at Cornell University, wrapped a seismometer inside two contractor-grade trash bags, sealed it with tape and buried it beside a barbed-wire fence near a small, two-story home. His teammate, Hannah Rabinowitz, a grad student from Columbia University, is testing the sensor by jumping up and down.

Rabinowitz sets down her checklist, “Ready for the stomp test?” 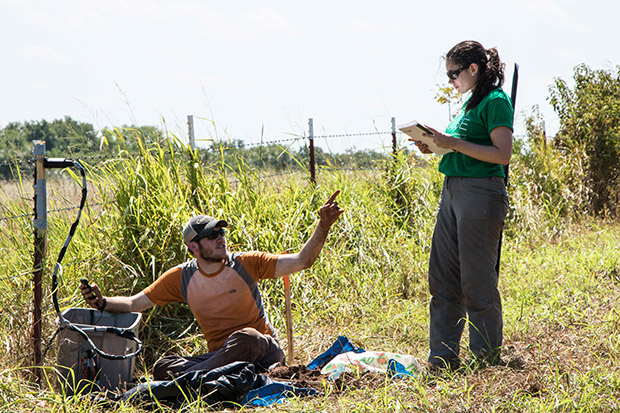 The pair makes a few calls to troubleshoot the finicky sensor. Typically, the equipment and sensors are pre-programmed and calibrated well in advance of deployment, but Stevens and Rabinowitz were in a hurry to get on the ground in Oklahoma. The team even unearthed recently placed seismometers from other, less-urgent locations in northwestern Oklahoma.

Rabinotwitz says capturing data on aftershocks is key to unlocking crucial details about the larger primary quake, like what might have caused it.

“It really helps us understand the fault systems in the area much better and have a better sense of the seismic hazard,” she says.

Immediately after the Sept. 3 quake, Gov. Mary Fallin declared a state of emergency in Pawnee County. State oil regulators contacted 12 energy companies and told them to start shutting down 37 disposal wells. In nearby Osage County, which is under federal jurisdiction, the U.S. Environmental Protection Agency is telling operators to shut down 17 wells.

“Injection well operators agreed to shut down their wells consistent with the actions in state jurisdiction, and some well operators had already shut down,” Joe Hubbard from the EPA’s regional office in Dallas wrote in an emailed statement.

The industry is warning the response from regulators could hurt energy companies and impact Oklahoma’s oil-fueled economy. 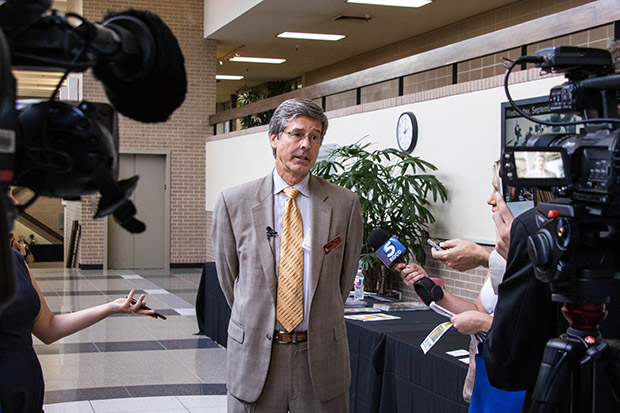 The Oklahoma Geological Survey, the state agency in charge of earthquake research, held a workshop in Norman this week with state and federal government officials, university researchers and representatives from the oil and gas industry.

The two-day event was scheduled months ago, and normally would be an under-the-radar affair. But the earthquake’s timing gave the meeting a sense of urgency. The event was closed to the public and off-limits to the media. StateImpact was escorted out of the meeting by OGS director Jeremy Boak. At least one other journalist was barred from attending the workshop.

Boak said energy company representatives attending the workshop would be afraid to speak openly if reporters or the public attended.

“In every meeting I’ve heard about where the press were involved, the companies say nothing,” Boak said. 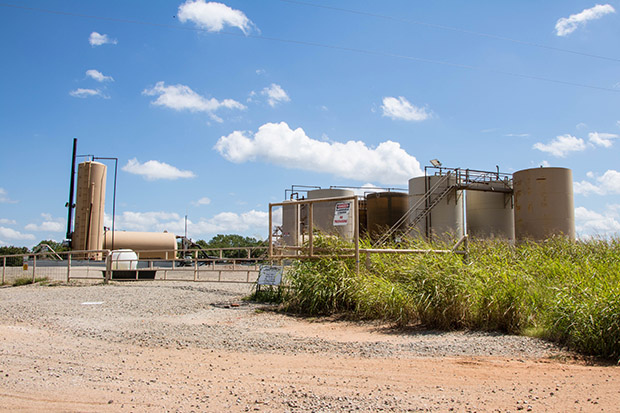 A chorus of scientists, including Dan McNamara, a research geophysicist with the U.S. Geological Survey, have linked Oklahoma’s earthquake boom to disposal wells the energy industry fills with waste fluid from oil and gas production —  more than a billion gallons a year.

In an effort to slow the shaking, the Oklahoma Corporation Commission last year started asking companies to shut down disposal wells or limit the amount of fluid injected underground. McNamara says those efforts have reduced earthquakes and contributed to a slowdown in the frequency of earthquakes.
“Even if all wells were to shut off today, there would still be energy in the system and earthquakes occurring for some time,” he said during a lunch break at the Norman workshop.

McNamara says the Sept. 3 quake could lead to more shaking in the days, weeks and months to come.

“I would not be surprised to see some magnitude-four aftershocks,” he said. “That would be very typical behavior.”

‘Not convinced’ of the connection

Pawnee resident Gayla Schone lives near the epicenter of the Sept. 3 quake. She wasn’t home when it struck, but she found damage when she returned.

“There are some bricks off the fireplace in the attic, off the chimney, onto our ceiling,” she says, noting that she and her husband aren’t sure if they can afford earthquake insurance or costly repairs since they’re both retired.

Schone says she and her husband make money from some oil and gas leases, and their son worked briefly in the oil and gas industry. She’s heard scientists connect disposal wells to the shaking, but she doesn’t buy it.

“I am not convinced disposal wells have anything to do with what is happening right now,” she says. “There has not been any drilling going on for the last two years, there’s not been any pumping going into the ground.”

Oklahomans have been lucky, McNamara and other researchers say. The strongest earthquakes have been in rural, sparsely-populated areas. If another powerful one touches off near bigger cities, the USGS says cracked chimneys would be the least of the problems. Serious injuries, and even deaths, could occur.