Lori Taylor reads the second letter she received from the state Department of Human Services informing her that her Medicaid waiver program will be funded temporarily.

Budget Uncertainty Leaves Seniors and Oklahomans With Disabilities In Limbo 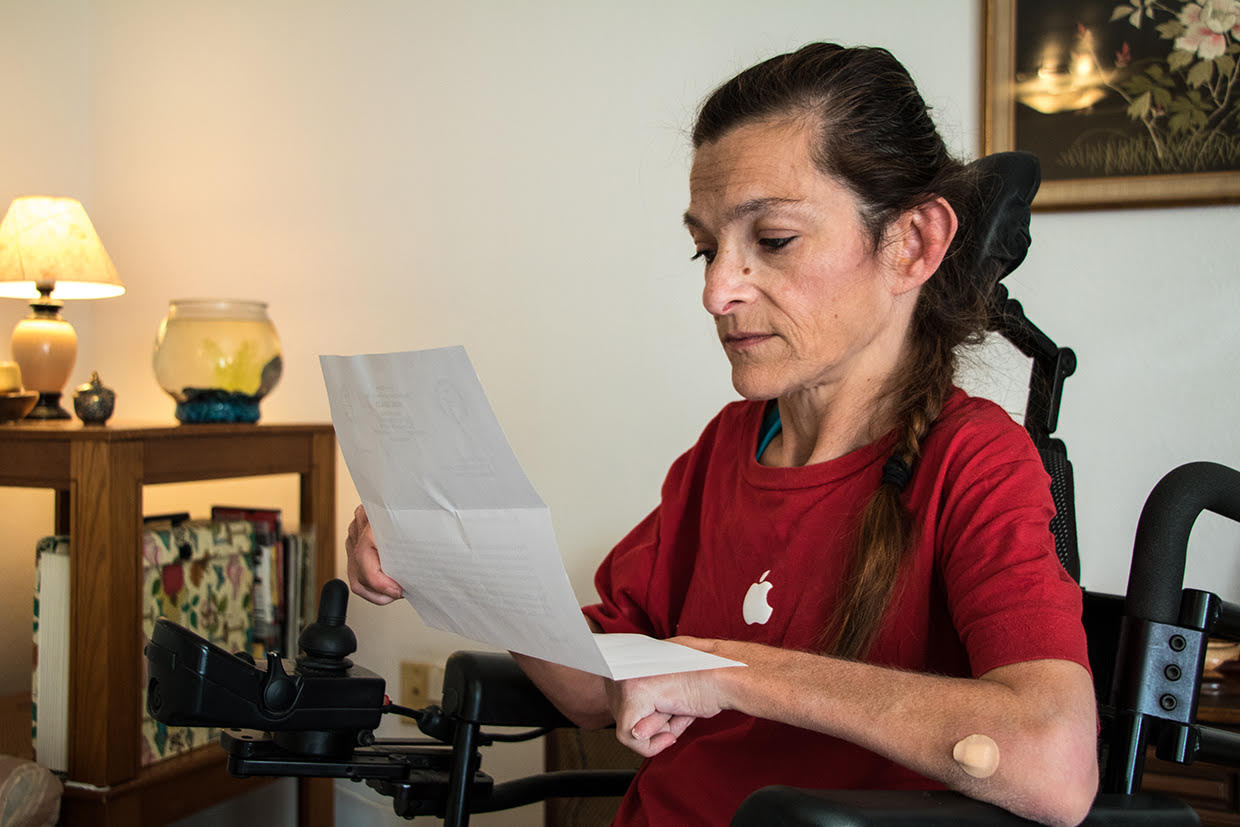 Lori Taylor reads the second letter she received from the state Department of Human Services informing her that her Medicaid waiver program will be funded temporarily.

After her divorce, Lori Taylor wanted a home all her own. She moved back to Oklahoma to be near her aging parents, but she had a problem. For years her personal caregiver had been her now ex-husband.

“I have cerebral palsy and that’s brain damage that I incurred at birth, and it affects my motor skills. I’m confined to an electric wheelchair. I can stand but I can’t walk, I have very limited use of my arms,” Taylor says, sitting in the living room of her Norman apartment.

She is able to live alone because of a form of Medicaid known in Oklahoma as the ADvantage waiver program. It’s called a waiver because it diverts Medicaid funds that would normally pay for institutional care like hospitals or nursing homes to pay for in-home support services. Waiver programs are popular in many states because they are more cost effective – nursing homes are expensive, and for the same amount of money the state can help more people live at home.

Without her ADvantage waiver, Taylor couldn’t get out of bed in the morning. In her case, the mix of federal and state funds pay for an aide to come to her apartment every day, as well as her hospital-style bed, and her Life Alert in case of emergencies.

She was shocked when she got a letter from the Oklahoma Department of Human services in early November informing her that the ADvantage waiver program was being eliminated in 30 days.

“It’s not in these words, but here’s how it came across: ‘Sorry we don’t have the funding for this anymore we’re dropping it within the next couple of weeks, you can go to a nursing home if you want, sorry.’ That was it,” Taylor says.

“Aides are quitting on people to go find other work and you can’t blame them, they have to look out for themselves,” she says.

Millions of dollars earmarked for DHS, the agency in charge of the waiver programs, fell through when a cigarette fee passed by the legislature was thrown out as unconstitutional. To make up the shortfall, the agency needed to cut $69 million, and the ADvantage and In-Home Support waiver programs were chosen. 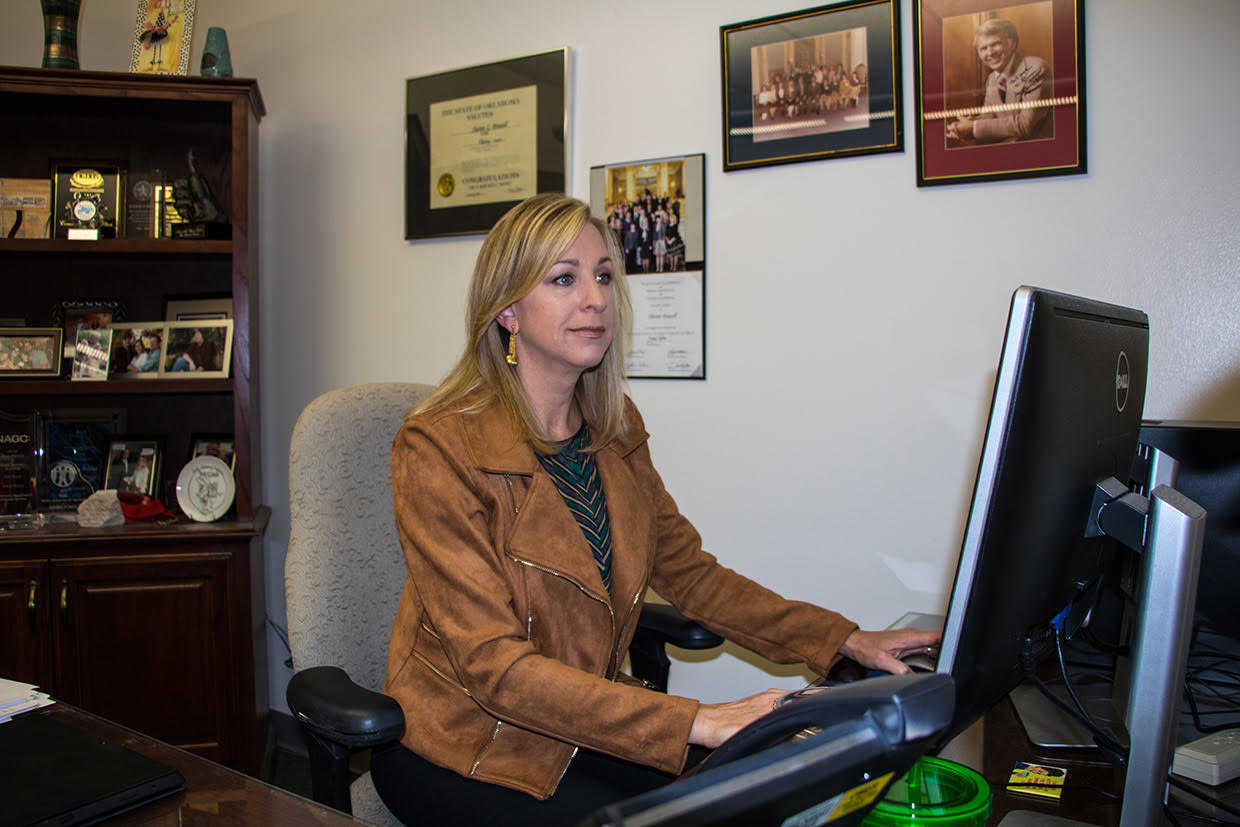 Sheree Powell, spokesperson for the Oklahoma Department of Human Services.

“When it comes to cutting this agency, there are no good choices anywhere,” says DHS communications director Sheree Powell.

Powell says DHS officials chose to cut the ADvantage and In-Home Support waivers because, together, they represent 26 percent of DHS’s state appropriations.

In late November, however, the situation changed.

More letters were mailed to waiver recipients after Gov. Mary Fallin signed enough of a budget bill to send an additional $27 million to DHS, which Powell said is enough to keep the waiver programs funded until the end of February 2018.

“Our cash flow is good through February, but by March DHS will not have enough cash to meet all of our current obligations, which means those programs and services will be in jeopardy again,” Powell says.

But two advocacy groups say the state, legally, doesn’t have a choice.

“If you’re somebody with a disability in Oklahoma, it’s the perfect storm,” says Brady Henderson, legal director of the American Civil Liberties Union of Oklahoma.

The ACLU and the Oklahoma Disability Law Center have sued to force the state to fund the waiver programs permanently. They argue that not doing so violates the Americans with Disabilities Act.

“At the same time the state’s trying to cut these waivers, which are an essential component, the state’s also squeezing nursing homes and other institutions, at the same time they’re now being called upon to suddenly accept thousands of new patients, and there are not enough beds,” Henderson says.

Powell, the DHS spokesperson, agrees that there are not enough nursing home beds in Oklahoma to provide care for everyone on the ADvantage waiver.

As the Legislature begins its third attempt at building a state budget during another special session, the future of the waiver programs hangs in the balance. Even if another cigarette fee is passed — and survives a court review — the revenue won’t be available for months. In the meantime, people who receive the waivers, like Taylor, are watching and waiting. If the funding situation changes, they’ll get another letter.

A courtroom victory for the advocacy groups could have unintended consequences. If a court orders Oklahoma to fund the waiver programs, it could force DHS to choose different programs to cut, and right now the agency is still underfunded by $42 million this fiscal year. Unless lawmakers appropriate more money to DHS, they could also lose out on millions of dollars in matching federal funds in the future. 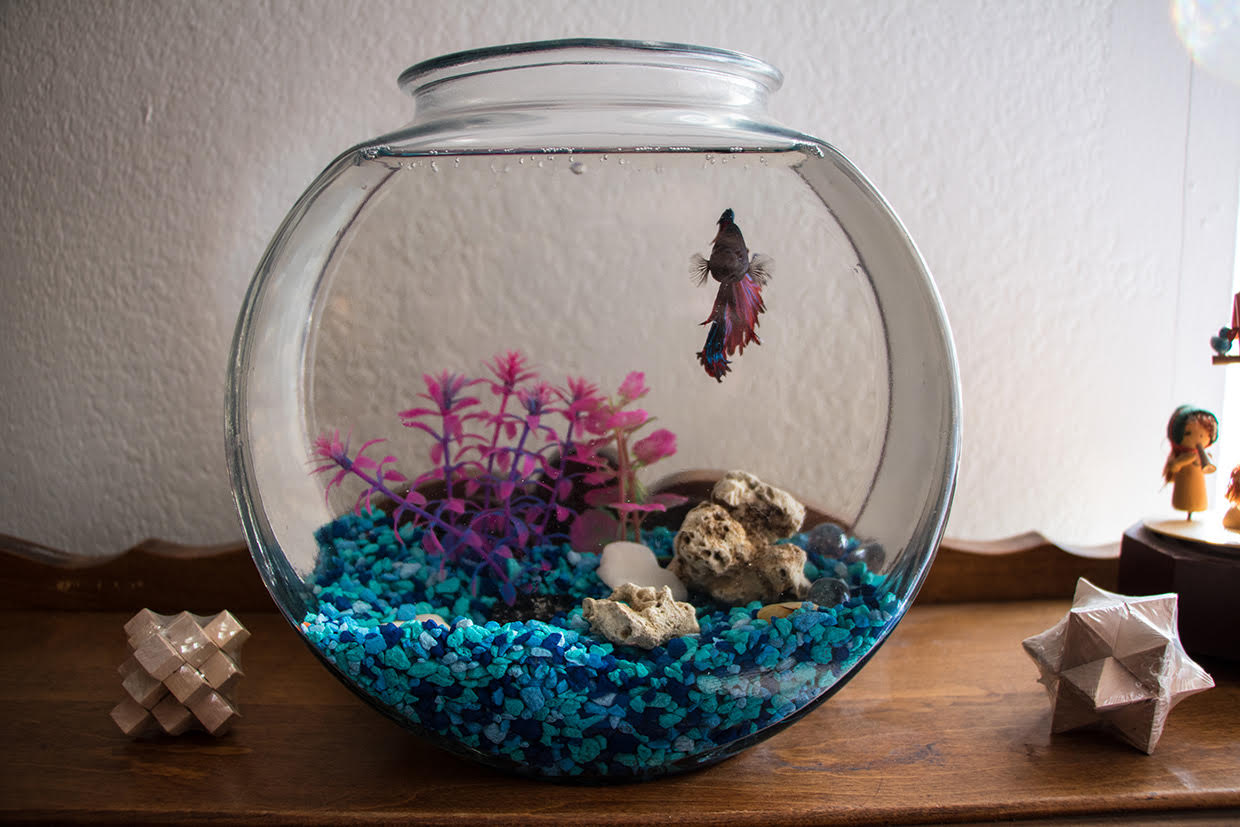 One of Taylor’s ten betta fish.

Lori Taylor is one of the plaintiffs. It’s a personal triumph for her to have left her husband and forged a new life. Surrounded by her photography, her dog and her 10 betta fish, she’s finally built a home in which she wants to stay.

“If they cut that ADvantage [waiver] program, it’s not hyperbole to say that people are truly going to die, in their own homes,” Taylor says.