A team from U.C. Santa Cruz and the Oklahoma Geological Survey cast doubt on a predicted decline in Oklahoma earthquakes in a paper published in Science Advances. 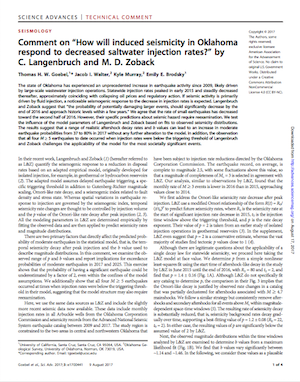 A team from U.C. Santa Cruz and the Oklahoma Geological Survey cast doubt on a predicted decline in Oklahoma earthquakes in a paper published in Science Advances.

A new research paper suggests Oklahoma’s earthquake hazard might not taper off as quickly or as significantly as scientists previously predicted.

The energy industry practice of pumping toxic waste-fluid byproducts of oil and gas production into underground disposal wells is thought to be fueling Oklahoma’s earthquake surge. This activity peaked in 2015 and slowed due to regulations and low oil prices.

In a newly published paper in the journal Science Advances, a team of scientists from University of California Santa Cruz and the Oklahoma Geological Survey agree the number of small earthquakes has diminished, but their analysis shows Oklahoma is twice as likely to experience a 5.0-magnitude or greater earthquake in 2017 than previously predicted. Earlier research put the odds at around 37 percent; the new research suggests the probability is 80 percent.

In addition, the model is not able to predict several moderate earthquakes that have already occurred, and thus, the prob- ability of future damaging earthquakes may also be underestimated.

The new research also suggests the time delay between injection activity and earthquakes in central and northwestern Oklahoma could be much longer: Up to 14 months instead of 5 months. The researchers say the risk of potentially damaging shaking could have been underestimated.

The Stanford say the new analysis is based on a misinterpretation of their findings. “Observed seismicity rates and magnitudes agree with the forecast of our model,” they wrote in a reply to the new research. “…. And disagrees with the long-term decay of seismicity in the region.”