A partial solar eclipse captured over Lake Hefner in Oklahoma City in 2014. 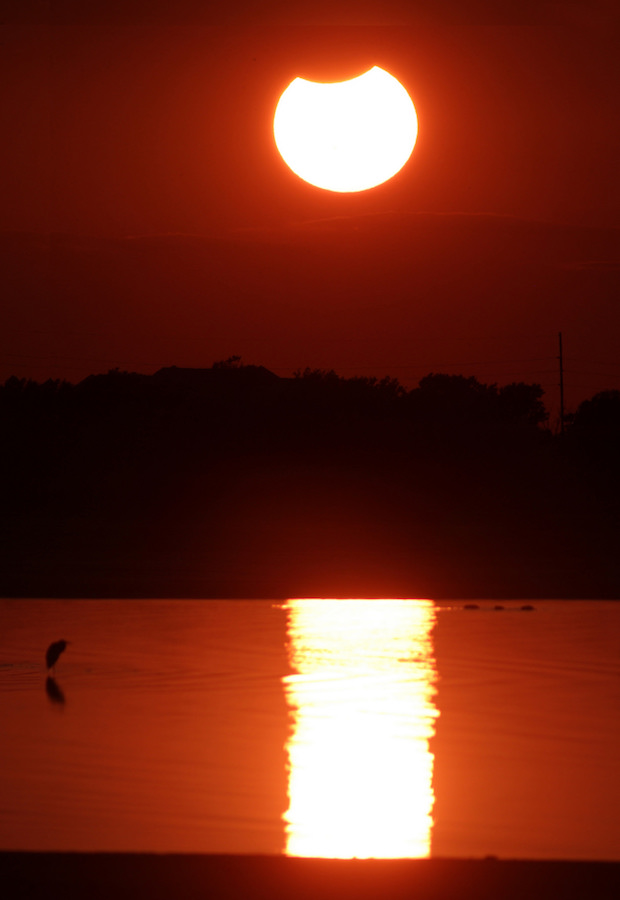 A partial solar eclipse captured over Lake Hefner in Oklahoma City in 2014.

A temporary mass migration that could reach into the millions is expected as people across the United States relocate to catch a prime view of the country’s first coast-to-coast total eclipse in nearly a century.

The vast majority of the country, including Oklahoma, isn’t in the path of “totality.”

The Tallgrass Prairie Preserve is northern Oklahoma is an ideal spot to see birds and bugs and the heavyweight stars of the grassland: A roaming herd of about 2,500 bison.

Katie Hawk with the Nature Conservancy says the preserve is also the perfect setting for viewing Monday’s solar eclipse.

“Forty-thousand acres of prairies and this clear, open, wide prairie sky,” she says.

Days after the conservancy announced its plans to host an eclipse-viewing event, tickets were gone. The conservancy expanded and opened up more seats, and those were quickly snapped up, too.

“We didn’t think there would be such a huge demand,” Hawk says. “You know, with people being at work and whatnot, and having already been going back to school.”

Most of Oklahoma is located within the 80 percent eclipse range, but the Tallgrass preserve is within a small triangle that will have the state’s best view as the moon blocks light from the sun starting mid-day Monday.

“It’s in the 90 percent totality viewing region,” Hawk says. “What a great experience and opportunity we have here.”

That’s one take. Astronomers like Williams College professor Jay Pasachoff have another: 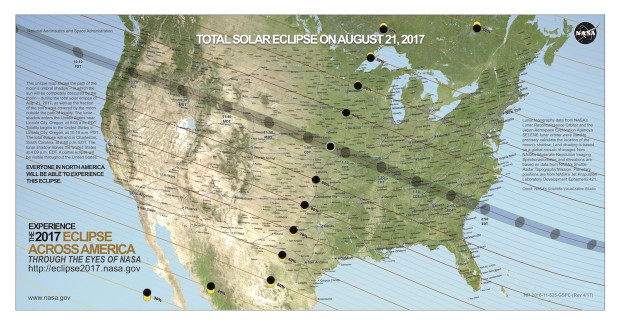 A map from NASA shows the path of the moon’s "umbral shadow."

Monday’s eclipse will cut a narrow 70-mile-wide slice of darkness that arcs from Oregon, through Nebraska, down to South Carolina. Astronomer Rick Feinberg, a former editor of Sky & Telescope Magazine now with the American Astronomical Society, says those regions will experience something that comes across more like an overcast day.

“It’s still broad daylight, but the character of the light might change a bit,” he says.

Other eclipse-viewing events are scheduled around the state on Monday, and Oklahoma isn’t the only place throwing partial eclipse parties. They’re happening everywhere, from the public library in Huntsville, Utah, to the planetarium in Flint, Michigan.

Astronomers say any Oklahoman with the time and means should make a trip to the path of “totality” on Monday. But, if that’s not possible, Feinberg says even a partial eclipse can still be fun

“When the sun’s a very thin crescent, some interesting things happen to shadows,” Feinberg says.

Standard warning: Don’t look at the sun without the proper glasses or filter. Feinberg suggest searching the ground for little crescent shapes, and watching how the focused light from the tiny sliver of sun looks when it’s cast through leaves on trees.

When the sun is partially blocked, temperatures could drop as much as 20 degrees — rapidly. At the Tallgrass preserve, Katie Hawk says a quick chill plus dimming light could trigger some weirdness with wildlife.

“You might see bats come out of nowhere. You might hear crickets or cicadas start chirping. Some birds may stop flying or go to their roost,” she says.

And while astronomers might not be moved by anything less than 100 percent eclipse coverage, Hawk and the Nature Conservancy have ordered extra eclipse glasses and expanded their watch party.

“As far as 90 percent goes, we’re pretty excited,” she says.

And if the partial eclipse experience disappoints on Monday, make your plans now, Oklahoma: The southeastern corner of the state is in the blackout path for a total solar eclipse — in 2024.

“Think of this as the warm up,” Feinberg says.