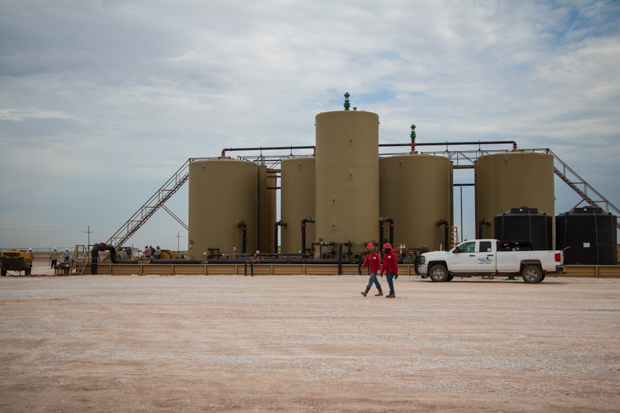 A key part in solving the state’s earthquake crisis is the long-term management of an enormous amount of oil-field wastewater likely triggering the shaking. The energy industry is working to solve this billion-barrel-a-year problem, and one promising alternative to risky disposal wells is reusing wastewater instead of pumping it underground.

The oil and gas industry has a love-hate relationship with water.

Energy producers need water. It’s used for mud and cement to lubricate, cap and seal off wells. And oil companies use a ton of water mixed with sand and other chemicals for fracking — which is fueling the United States’ recent oil and gas boom.

Water is such a precious resource during drilling and fracking, there’s often not enough to go around, says Reed Durfey, a water and technical services manager with Houston-based Newfield Exploration.

“You can’t rely on Mother Nature,” he says. “Even during normal times, as operations pick up, there’s probably not enough freshwater for everybody.”

In the oil field, water is also a huge burden — one that comes with major economic and environmental costs, Durfey says. Water is expensive to move and store with trucks, pipelines and storage tanks. And much unwanted oil-field water is toxic, like used frack water and “produced” water from ancient oceans that comes to the surface with oil and gas.

Scientists say the mass-scale pumping of that toxic water back underground into disposal wells — the government-approved, industry-standard solution — disrupts faults and has made Oklahoma a global earthquake hotspot.

One part of a possible solution: Find a way for oil companies to reuse that wastewater instead of injecting it into oil-field disposal wells.

“That’s the process that we’re doing today,” Durfey says. “Recycle or reuse something that we used to think was a waste stream.” 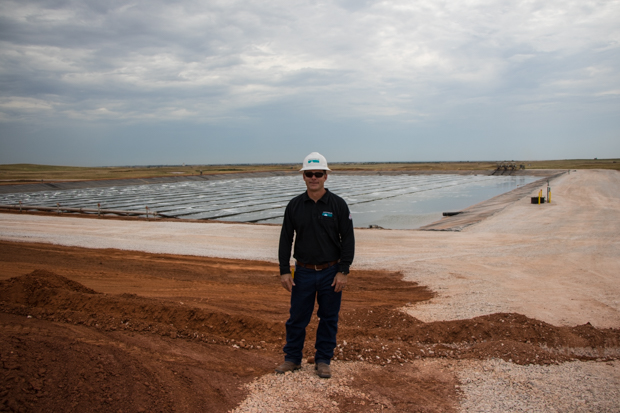 Reed Durfey, a water and technical services manager with Newfield, stands in front of the containment pond at the Barton facility.

On an overcast day in late July, a fleet of electricians, engineers and construction workers scurries around a 40-acre site near Calumet in Kingfisher County conducting final checks and tests on Newfield’s new Barton Water Recycling Facility. The facility is located in the STACK, a booming Oklahoma oil field that has drawn national attention, and is dominated by a towering cluster of tanks and flanked by several colossal plastic-lined ponds.

The Barton facility is designed to recycle up to 30,000 barrels of oil-field wastewater — a day. That means all the wastewater from the company’s 40 well sites can be reused instead of being pumped underground, which equals less pressure on faults and fuel for earthquakes.

“You remove that problem or hopefully or you reduce the risk,” Durfey says.

Most of the wastewater arrives to the recycling facility via pipeline. Here, it’s pumped into a series of tanks, where oil and other contaminants are separated off. Chemicals and bacteria are added to the wastewater, which is piped into one of the holding ponds and pumped full of air.

“The goal there is to feed the good bacteria to crowd out the bad, and also oxidize any iron sulfates that drop down out as solids in the bottom of the pits,” says site engineer Ben Lloyd.

Those solids wastes are eventually hauled off, but the water is pumped into a separate holding pond. Once it’s filtered and treated — a process that should take about 21 days — it’s clean enough for Newfield to reuse it for drilling and fracking throughout the oil field.

Durfey, the manager with Newfield, says the facility should allow the company to stop using its main disposal well in the STACK play, and the firm will save money since it won’t have to buy and transport as much freshwater for drilling and fracking.

“If you can have an infrastructure in place that can help eliminate some of that distance and some of the expense, it’s a huge competitive advantage,” Durfey says. 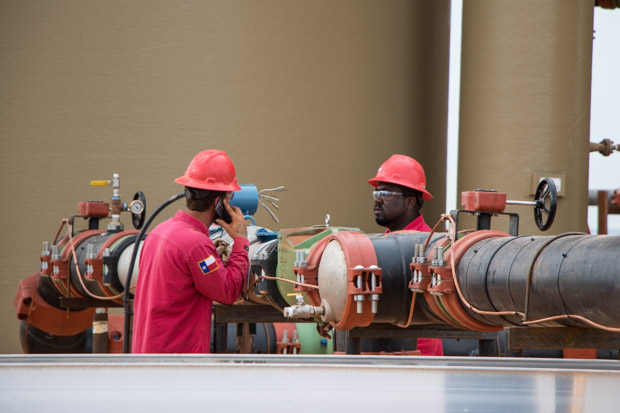 Oklahoma is still rumbling with aftershocks from a 4.2-magnitude earthquake that struck late Wednesday near Edmond. Oklahoma still experiences an unusually large number of earthquakes, but the frequency has tapered off since state authorities imposed restrictions on disposal wells — the kind of wells regulators and industry hope recycling centers like this might one day replace.

A consortium of energy experts and state authorities — tasked with studying how best to change the industry’s wastewater handling to help stem Oklahoma’s earthquake uptick — released a report in April that concluded such reuse was the most practical alternative to disposal wells.

Only a handful of companies operate reuse facilities in Oklahoma, none of which match the scale and capabilities of Newfield’s Barton recycling center, says Corporation Commission Matt Skinner. The price tag for the facility, including necessary pipelines and other equipment to collect and move wastewater to the site, is around $40 million, Durfey says. Compare that to a typical disposal well, which might cost an oil company a few hundred thousand dollars.

“It costs us a lot of money to run [the wastewater] through all the steps that it needs, but this is the way we’re rolling and moving forward,” Durfey says.

Newfield’s recycling facility has other benefits, including reducing reliance on one of the most dangerous and environmentally risky parts of the oil business: trucking. When the Barton facility is fully operational, Newfield will stop using tanker trucks to transport toxic wastewater from nearly all of its STACK well sites.

“That’s 250 trucks you’re going to be removing from the road per day, Durfey says. “Each truck holds 120 barrels, so that’s a huge impact — not only for the operators, but the community.”