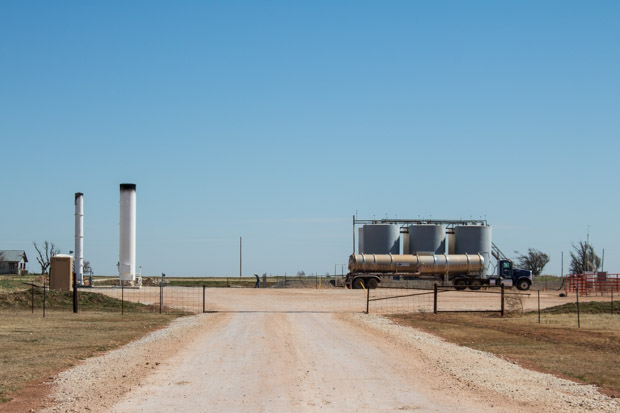 The most practical alternative to earthquake-triggering oilfield disposal wells is for energy companies to reuse the wastewater instead of injecting it underground, leaders of a research group working on behalf of the state said Wednesday.

The findings were released in a report created by the Produced Water Working Group, a consortium of academics, state officials and industry experts tasked by Gov. Mary Fallin in 2015 to explore ways to reduce wastewater injection, the widespread oilfield practice scientists widely agree is responsible for Oklahoma’s surge in seismic activity.

Oklahoma’s oilfields are known to produce prolific amounts of water that travel to the surface with crude and natural gas. This “produced water,” a subterranean relic of ancient oceans, is three to five times saltier than seawater and contains metals and other chemicals toxic to people, wildlife and plants, says Michael Dunkel, a vice president at CH2M who facilitated the group’s work.

“It’s got to be handled quite differently than freshwater is handled,” Dunkel says.

The government-approved, economical way to deal with produced water is for oil companies to pump it back underground into disposal wells. But as horizontal drilling and fracking helped bring an oil and gas boom to Oklahoma in 2009, the volume of this produced water skyrocketed — and earthquakes soon followed.

While Oklahoma oil companies produce a lot of water, but they also need a lot of it. Large volumes of water are used in hydraulic fracturing, which almost all new production relies on. The research group suggests the most cost-effective means of reducing disposal is for oil companies to treat and clean that produced water so it can be reused for things like fracking.

“The cheapest, easiest thing to do is to reuse the water right there within the industry,” says Owen Mills, the director of water planning for the Oklahoma Water Resources Board, which organized and hosted the Produced Water Working Group.

A second potential alternative, the group found, is expanding this reuse geographically, so wastewater produced in one region of the state could be reused in a different oilfield. Mills says that process is a bit more complicated.

“You can’t do it by trucks,” he says. “It’s got to be done with some kind of permanent or semi-permanent infrastructure.”

That means pipelines, probably shared by multiple oil companies. The third alternative, which one company is just now starting to try, is taking that produced water, filtering it and spraying it into a fine mist that evaporates, leaving behind solid waste that can be trucked away.

“There’s a lot to it, but it’s fairly cheap and you can do that anywhere. You can do that right there next to the well sites,” Mills says.

The research group considered other alternative uses for oilfield wastewater — including removing the salt and cleaning it to a level where it can be used for crop irrigation, or a power station; or treating it so it’s safe enough to discharge into a stream or river — but Mills says none of those options are practical anytime soon.

“It’s incredibly expensive to do that and it takes a lot of energy,” he says.

The water research group’s report also identified several regulatory and legal roadblocks to some potential disposal well alternatives, including ambiguity over the ownership of produced water in transport and the long wait in getting permits from the U.S. Environmental Protection Agency. Legislation to clarify produced water ownership, Senate Bill 743, is advancing at the state capitol. Gov. Fallin on Wednesday signed SB 287, which authorizes state energy and water regulators to ask the EPA to let the state issue some of its own wastewater permits.

The Environmental Defense Fund, which has been critical of the oil industry and Oklahoma officials’ slow acknowledgement of research linking it to earthquakes, supports the water research group’s top finding that the most practical alternative to disposal wells is on-site reuse.

“The oil and gas industry is up to the challenge of finding smart ways to reuse their wastewater within the oilfield,” says EDF attorney Nichole Saunders.

If the oil industry or officials do consider other alternatives, like reusing the water outside of the oilfield, the water research group says a lot more data and regulation is needed. The EDF agrees. “We don’t want to inadvertently create a new risk while we’re trying trying to solve another one,” Saunders says.