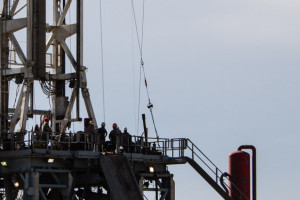 Workers assemble a horizontal drilling rig in southwestern Oklahoma’s Grady County, near a booming oil play known as the SCOOP.

More than half the oil and gas a typical horizontal well will produce over its lifetime in Oklahoma is pumped to the surface during its first three years, a new report from Oklahoma Watch shows.

That relatively short window of abundant production is important because that’s when the wells are taxed at much lower rates, reports Warren Vieth from Oklahoma Watch, which tapped data analysis firm Wenzel Technology to crunch 30 years worth of production numbers from more than 3,000 horizontal wells.

The analysis provides a deeper look at how much money the state can expect to collect from booming oil fields “before the wells peter out over time,” a key part of recent debate about oil and gas taxes at the Oklahoma capitol:

During recent legislative debates about the optimal level of taxation, lawmakers based their decisions on widely divergent estimates of how quickly horizontal well production is likely to decline.

One House member asserted that “most” of a typical well’s production would occur during the first two years. A petroleum engineer told legislators the halfway mark would not be reached until about four years.

The analysis by Oklahoma Watch and Wenzel Technology indicates the truth lies somewhere in between.

In investor presentations, several oil companies have said those initial production rates are increasing, Vieth reports, which could lead to a greater portion of oil and gas coming during the first three, low-tax years.

The steep decline curves help to explain why oil and gas companies have pushed hard in recent years to adopt a two-stage tax rate formula. The better they get at front-loading a new well’s lifetime production, the lower their tax burden will be.