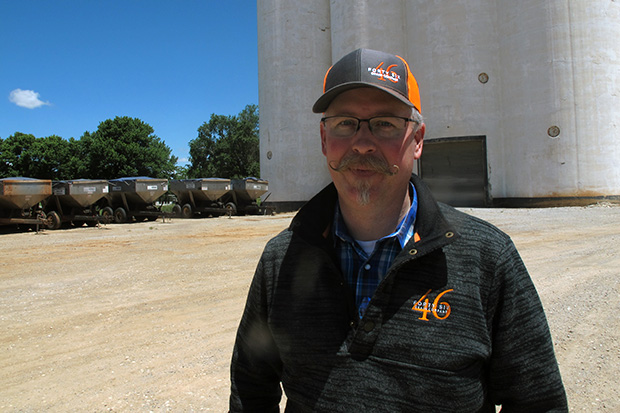 The Oklahoma rye harvest gets underway within the next few days. Oklahoma is the country’s number one producer of what is occasionally referred to as the ‘poverty grain.’ Rye doesn’t have the best reputation, but demand is on the rise.

About 200 people call the northwestern Oklahoma town of Ames home. There’s not much here, but one feature dominates the tiny town: The massive white grain elevator run by the Farmers’ Elevator Coop, a featureless prairie skyscraper. It’s where 46 Grain Company stores tons upon tons of rye it produces each year.

J.D. Drennan, 46 Grain’s senior agronomist, says his company is the largest rye dealer-processor in the country.

Drennan wasn’t always a rye guy. He used to be in the wheat business, and he hated rye. Like many wheat farmers, he considered it a nuisance weed when it invades wheat fields.

“I spent the first 20 years of my career trying to figure out how to kill rye,” Drennan says. “Whenever I first started talking to 46 Grain Company they said, ‘We grow rye.’ And I was like, ‘No you don’t. Nobody grows rye on purpose.’”

After decades of playing second fiddle to tastier wheat, rye is on the rebound and demand is rising quickly. That’s good news for Oklahoma, where the natural sands along the Cimarron River are ideal for growing the grain.

It’s always been a popular forage crop for livestock, but it’s rarely been a food source for people in recent history. Now, rye’s growing popularity coincides with the rise in no-till, sustainable farming practices, especially in the southeastern U.S. and Midwest.

“They’ll let it grow all winter to keep the ground covered, that way they don’t have moisture loss and they don’t have nutrient loss through the winter,” Drennan says. “They’re starting to plant cotton down there. They’re starting to plant soybeans. So they’ll come in and terminate that rye crop, where they can no-till cotton or soybeans or corn or some other higher value crop into that stubble or that residue.”

Oklahoma is an easy place to grow rye. Many varieties of rye were developed here, too —  at the Noble Research Institute in Ardmore. That’s where StateImpact found the Institute’s senior plant breeder, Mike Trammell, surrounded by garden plots bursting with golden yellow rye varieties developed by Noble over the decades. 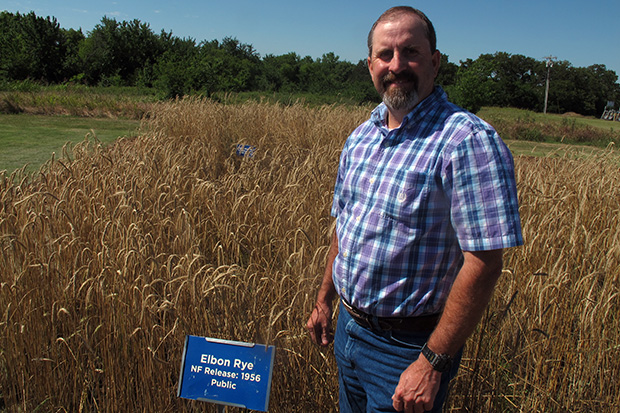 Mike Trammell, senior plant breeder at the Noble Research Institute, shows off the Elbon rye developed at the facility in Ardmore, Oklahoma.

“Our first release was in 1956 with Elbon rye, which is ‘Noble’ spelled backwards,” Trammell says.

It was developed simply as a grazing crop, before the use of cover crops was widespread.

“Farmers had plenty of warm season material to graze, mainly Bermuda grass in this area. But what to do during the winter? Dr. Roy Chesmore was the breeder here at the time, and he’s the one that developed Elbon rye,” Trammell says.

Back at 46 Grain in Ames, J.D. Drennan shows off the company’s brand new malt house, the largest in the western U.S. Another growing use for Oklahoma rye: To make local craft beers and whiskey.

“So we will have a truly Oklahoma grain-to-glass experience for Oklahoma craft brewers,” Drennan says.

Drennan calls rye whisky the “sexy spirit” because of its newfound popularity, and says a truly American whiskey has to have rye.

“According to the law set in place by George Washington, who owned his own distillery, so he was in the business, in order to be a true American whisky, it must be a rye whiskey and it must contain 51-percent rye in the mash bill,” Drennan says. 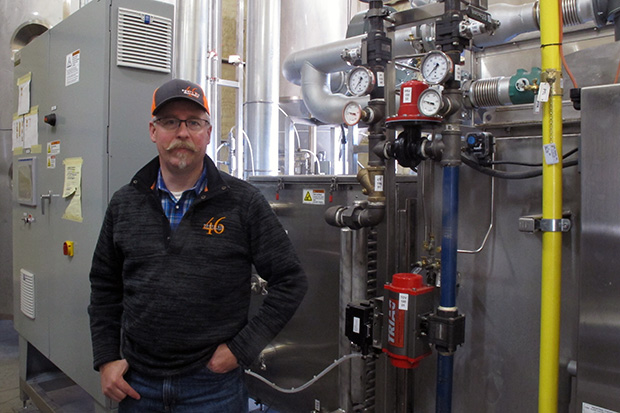 Right now there are only a couple of whiskey distilleries in Oklahoma, and they want Oklahoma rye. And Drennan can provide as much as they need. The rye crop in 2014 was terrible because of drought. But since then, there’s been a boom.

“Because of the glut of grain from two years ago and last year, the price for rye has went into the basement,” Drennan says.

Conditions for the 2017 harvest look great again, so much so that rye farmers are expected to back off the amount they produce, just to get the price back up.