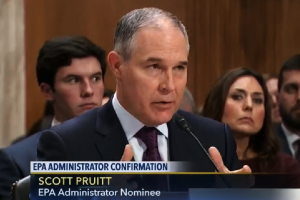 Shortly after taking over as head of the U.S. Environmental Protection Agency, former Oklahoma Attorney General Scott Pruitt started a roll-back of Obama-era environmental regulations, an effort that has provided big benefits to one of his home state’s largest independent oil and gas companies, the New York Times reports.

Pruitt has long maintained a close relationship with Devon Energy, which evolved from a minor political player to a major lobbying force during the Obama administration. With Pruitt leading EPA, Devon is making headway in its fight against federal environmental regulation, Hiroko Tabuchi and Eric Lipton report:

Devon Energy, which runs the windswept site, had been prepared to install a sophisticated system to detect and reduce leaks of dangerous gases. It had also discussed paying a six-figure penalty to settle claims by the Obama administration that it was illegally emitting 80 tons each year of hazardous chemicals, like benzene, a known carcinogen.

But something changed in February just five days after Scott Pruitt, the former Oklahoma attorney general with close ties to Devon, was sworn in as the head of the Environmental Protection Agency.

Devon, in a letter dated Feb. 22 and obtained by The New York Times, said it was “re-evaluating its settlement posture.” It no longer intended to move ahead with the extensive emissions-control system, second-guessing the E.P.A.’s estimates on the size of the violation, and it was now willing to pay closer to $25,000 to end the three-year-old federal investigation.

In just the last three months, with Mr. Pruitt in charge, the E.P.A. postponed a long-planned rule requiring companies like Devon to retrofit drilling equipment to prevent leaks of methane gas — a major contributor to climate change — and to collect more data on how much of the gas is spewing into the air.

The Interior Department, meanwhile, announced this month that it would reconsider a separate rule limiting the burning of unwanted methane gas from wells drilled on federal and Indian lands, a process called flaring. That announcement came the same day the Senate narrowly rejected industry calls to repeal the same rule.

Interior officials have also announced their intention to repeal or revise a contentious rule requiring companies like Devon to take extra steps to prevent groundwater contamination caused by hydraulic fracturing, also known as fracking, a drilling technique in which chemicals and water are forced into rock formations.