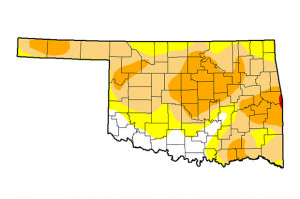 Oklahoma drought conditions as of February 21, 2017

Frigid temperatures never fully took hold in Oklahoma this winter. February saw record high temperatures, and instead of ice and snow, wildfires were the main weather-related concern, and drought — though improved — has persisted across much of the state.

In a statement summarizing February’s weather highlights and looking ahead to March, State Climatologist Gary McManus says the first two months of 2017 broke the record for the warmest combined January and February in state history.

If glimpses of winter were sporadic in December and January, they were downright scarce during February. Temperatures often soared into the 70s and 80s, culminating with a maximum of 99 degrees at the Mangum Mesonet site on February 11. That tied the mark for highest temperature ever recorded in Oklahoma during not only February, but winter as well. The record was set previously at Arapaho on Feb. 24, 1918.

The March outlooks from the Climate Prediction Center (CPC) indicate warm, dry weather is possible during March with increased odds of above normal temperatures and below normal precipitation. With those conditions favored, CPC’s U.S. Monthly Drought Outlook sees drought persisting across the state where it currently exists. No drought development is expected during March.