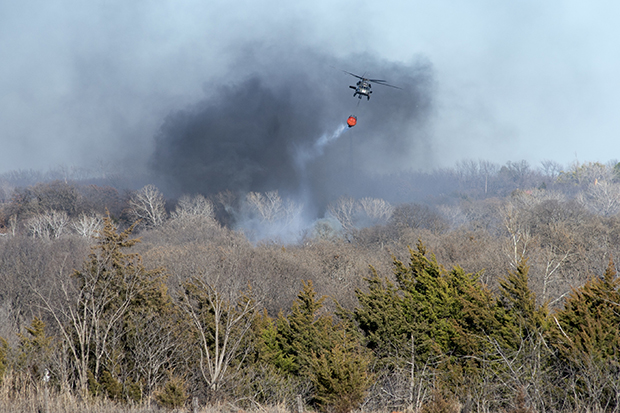 Oklahoma Army Guardsmen were called out to support local firefighters in Edmond on January 24. Eight Soldiers on two UH-60 Blackhawk helicopters equipped with Bambi Buckets flew nearly three hours and dropped 30 buckets, releasing around 19,800 gallons of water on a wildfire that engulfed houses in the area.

With 95-percent of the state under drought conditions, Oklahoma has been issued its first ever national fire advisory from the National Interagency Fire Center in Boise, Idaho. The advisory lasts for two weeks — into mid-February — and warns, as The Associated Press’ Justin Juozapavicius reports, “the ingredients for a potentially disastrous fire outbreak are already in place.”

The national center also cautioned that areas in the neighboring states of Texas, Colorado, New Mexico and Kansas could be ripe for similar extreme wildfires through February. While only two of Oklahoma’s 77 counties are currently under a burn ban, Oklahoma Forestry Services officials cautioned residents Wednesday to “avoid doing anything that can cause a spark.”

Juozapavicius reports Oklahoma is just entering its peak fire season, and “dozens of wildfires have already scorched thousands of acres in the past two months,” thanks to a combination of the ongoing drought and debris left on forest floors from recent natural disasters like ice storms and tornadoes.

Last week, a fast-moving wildfire 30 miles north of Oklahoma City devoured two homes, outbuildings and hay bales. In December, seven fires broke out in one afternoon across Oklahoma City; another consumed 200 acres near the town of Tecumseh the same month.

“We’re just entering a period where things can get really dicey with the fire situation,” said state climatologist Gary McManus. “We have set ourselves up for more of a damaging wildfire season.”