Trucks lined up at a disposal well in northwestern Oklahoma. 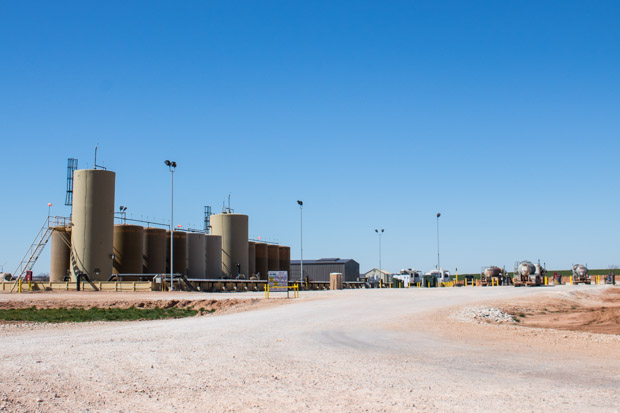 Trucks lined up at a disposal well in northwestern Oklahoma.

To date, the state’s earthquake response has centered around curtailing earthquakes linked to wastewater injection wells. Hydraulic fracturing — the well-completion technique known as “fracking” — is known by researchers to trigger earthquakes, both in Oklahoma and in oil and gas fields around the world. But scientists and officials believe the potential size and scale of fracking-related earthquake activity is significantly smaller than that posed by wastewater injection.

“Frack-quakes are very short-lived and they’re only possible when the frack is going,” says Matt Skinner, spokesperson for the Oklahoma Corporation Commission. “[Hydraulic fracturing] sometimes lasts for a day, sometimes it lasts for several days, but that’s it. If there is seismicity related to fracking it stops when the fracking stops.”

The commission is preparing to release the fracking guidelines along with a new package of restrictions on wastewater injection wells crafted to reduce earthquakes in and around Pawnee and Cushing, where 5.8 and 5.0-magnitude quakes caused minor injuries and widespread damage in September in November.

A string of earthquakes ranging from 3.0 to 3.4-magnitude that shook over the summer and fall near Blanchard and Calumet spurred the fracking-related guidelines, The Oklahoman’s Paul Monies reports. One potential complication for the energy industry: The epicenters of the suspected fracking-related earthquakes are located in the SCOOP and STACK, currently the most active and promising oil and gas plays in Oklahoma:

Chad Warmington, president of the Oklahoma Oil and Gas Association, said his member companies already have internal protocols to watch for seismic events during hydraulic fracturing jobs. Many of the association’s members are among the most active drillers in the SCOOP and STACK plays.

“In the rare instances where seismicity rises above the microseismic level, the goal is to keep it from being felt at the surface,” Warmington said. “A protocol the (Corporation) Commission puts in place proactively is a good thing because it matches and probably really fits well with the internal company protocols they use as they detect seismicity in and around the areas in which their production is taking place.”

Fracking is a process used after wells are drilled. Pressurized water and small underground explosions create fissures in tight rock formations, freeing trapped oil and gas deposits that flow to the surface. The state’s guidelines for fracking-related earthquakes are still being finalized, but will likely include limits on the volume and pressure of water used and the duration of the fracking process, says the commission’s Skinner.

Hydraulic fracturing crews are typically at well sites for short periods of time, from several days to several weeks. Wastewater does flow back to the surface during that time, but the volumes are far below the wastewater volumes that come up during ongoing production.