Graphic showing stress change after the 5.1-magnitude earthquake that struck near Fairview in February 2016. 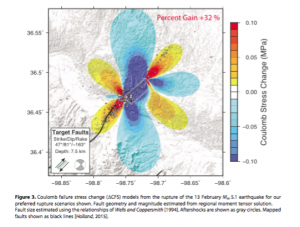 Graphic showing stress change after the 5.1-magnitude earthquake that struck near Fairview in February 2016.

The earthquake near Fairview produced a large blast of seismic energy that spawned a series of widely felt aftershocks. The quake is now considered one of the largest ever linked to the oil industry practice of pumping toxic water produced during drilling into underground disposal wells, U.S. Geological Survey research geophysicist William Leck and a team of federal and university scientists write in a paper published in Geophysical Research Letters.

The Fairview event is the largest quake scientists have linked to disposal wells since the 5.7-magnitude temblor that shook in November 2011 near the small community of Prague, also in Oklahoma. Seismologists think the damaging 5.8-magnitude quake that shook the state over the Labor Day weekend — Oklahoma’s largest, ever — was likely triggered by injection activity, too, though peer-reviewed research findings have yet to be published.

In the three years prior to the Fairview earthquake, wastewater injection in the area increased sevenfold, the scientists found. The shaking — which caused no injuries and resulted in only minor damage —  occurred a “relatively large distance” from the disposal wells, which “points to the critical role preexisting, though possibly unknown, fault structures play in inducing large events,” the scientists write.

Scientists think the practice of wastewater injection is the reason Oklahoma is now the most seismically active state in the nation.